Love Thy Neighbor: Quandaries of the Edgemont Living-Learning Experiment 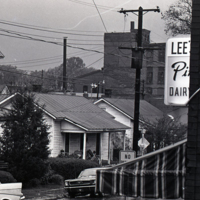 In the mid-1960s Duke University sent a group of White undergraduates into one of Durham’s “most blighted” areas. The Edgemont community was about 40% White, 60% Black, and entirely affected by poverty. It is here that some “children of the 60s”-type Duke students made their homes during the academic year. Driven by progressive personal politics, they answered the Duke Religious Council’s call to be a "good neighbor."

It can be shocking to read about the Edgemont Living-Learning Experiment (you mean Duke sent a bunch of bourgeois White kids to live with poor people… as an experiment?!) — until other Duke initiatives such as DukeEngage and DukeImmerse come to mind.

Upon first encountering the Living-Learning Experiment, I thought it to be an even more crass version of today's service-learning initiatives. I thought it was racially unbalanced, paternalistic, and frankly, audacious; even the terminology ("experiment") was indicative of White liberal perception of poor people as a project to take on for the sake of abstract principle.

And if not this, then what?

But even when comparing the Experiment to today's programs like DukeEngage and DukeImmerse, I am endeared to it. Unlike the programs above, the Experiment did not use exorbitant funding to send students to faraway locations. DukeEngage is service-oriented, but it can also function as an all expense paid vacation. The program advertises that students will be living as the local people do. But from what I've heard, local people can sometimes mean the bourgeoisie of the area. Similarly, DukeImmerse's most current program sends students to work with refugees in Jordan. Former participants have criticized the program's built-in lavish dinners (but only for the students) while refugees struggled with bare necessities.

The Edgemont Living-Learning Experiment was humble — students lived in actual houses within the neighborhood. Student entertainment was not in the budget; that's right, no day-trips to tourist locations!

And then there is the mere premise of the program: Living-Learning. Not service-learning. While service was a component of the experiment, but core goal was to integrate students into a community that they would never otherwise engage with.

While this doesn't actually alleviate poverty or solve any systematic issues, we have to examine it for what it was. It was a local, community-based effort to bring town and gown together. The Experiment did not aim to fix the world, but only to foster personal relationships that would never otherwise form. It endeavored to cultivate empathy and understanding that students could not find in the classroom while discussing political theory.

As you read about the Experiment, keep in mind the nuances I've articulated above, but remain critical. What is the role of an institution like Duke in local affairs? Especially with a surrounding population that's so different in race and socioeconomics? What is within Duke's power, and what is out of its hands?