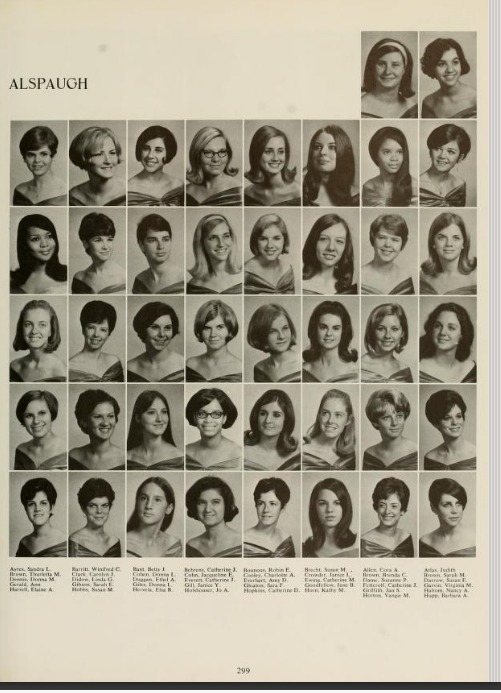 The 1969 Chanticleer featuring members of the Women's College.

Despite the administration's decision to officially desegregate the undergraduate colleges of Duke in 1963, racial tensions continued to permeate campus life for Duke’s black and white students throughout the decade. At a predominantly white, Southern institution in which they made up about 1 percent of the student population in the late 1960s, many black students felt alienated by campus life. Isolated from their families, churches, and other familiar communal institutions, Duke's black students voiced their apprehension over the pressure to integrate into the overwhelmingly white culture of the University. Presented here are some of the voices of Duke’s first black students and their experiences on campus during the 1960s, courtesy of the Allen Building Takeover Oral History Collection at the University Archives.

Bill Turner, as he is featured in the 1969 Chanticleer.

“In those days, middle class blacks did not go to white institutions, as they do now. Middle Class blacks back then went to Howard, Tuskegee, North Carolina College etc. By being from the South, all black students were accustomed to all black settings, and many of the blacks at Duke were reared in all black schools, churches, and communities. Being at Duke, they had no black professors, leaders, surrounded by white people. Only other blacks at Duke were maids who made the beds.”

Janice Gill Williams, as she is featured in the 1972 Chanticleer.

“Coming from a culture base at the white high school [in Huntsville, Alabama] was not so bad because I always came back to a black community and a black home and very familiar cultural surroundings. When I switched over to Duke, the difference was that I could not go and get recharged. I never could let my guard down. I never could just relax and be myself.” 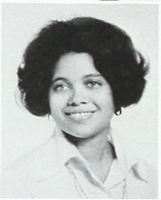 Brenda Armstrong, as she is featured in the 1970 Chanticleer.

“A lot of it was on a very personal level. People having been brought up to think that there was something different about black people…watching you as you took a shower or as you washed your teeth…Being away from home at college means that college becomes your home…Even the times when you’re supposed to be able to decompress, you can’t because the same thing follows you in your social and residential life. Basically you’re in a situation of stress twenty-four hours a day.”

In September 1963, the first five African American undergraduates entered Duke, joining a campus that still had segregated restrooms in certain places and a "colored" section in Wallace Wade. The 1963 year-end issue of The Duke Chronicle reported that student opinion remained divided on integration, varying from "open enthusiasm to subtle hostility." However, the black students experienced insensitivity and indifference from other students and faculty. The black students assembled as a united front for the first time in the 1967 Allen Building "Study-In," where they protested other student organizations' patronage of segregated venues. The creation of the Afro-American Society in 1968 demonstrated the black students' desire to claim their place in the student body. The Silent Vigil and Sit-in at President Knight's house the same year, following the assassination of Martin Luther King, Jr., indicated the black students' burgeoning frustration with an administration that was slow and uncommunicative to meet their needs, such as an increased presence of black faculty. The Allen Building Takeover on February 13,1969 was the culmination of several years of the black students' efforts to be acknowledged. 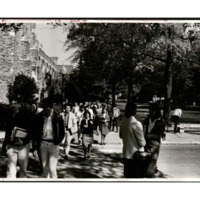 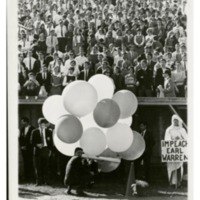 Students are congregating at an event with one student holding an "Impeach Earl Warren" sign. Earl Warren, the 14th Chief Justice of the United States Supreme Court, oversaw historix progressive decisions, such as Brown v. Board of Education (1954), Gideon v. Wainwright (1963), and Miranda v. Arizona (1966). 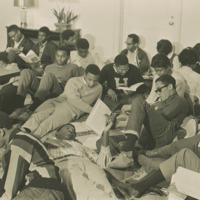 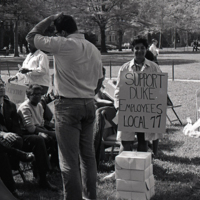 The Silent Vigil and the Sit-In at President Knight's house in 1968 were ignited by Martin Luther King Jr.'s assasination as well as a disagreement revolving around issues of hours, wages, and union representation between Duke's administration and its maintenance staff, many of whom were severely underpaid black Durhamites.