This section of the online exhibit explores the events that occurred simultaneously with the Takeover on February 13, 1969.

On Wednesday night, February 12, 1969, a member of the Afro-American Society called the Duke Chronicle to inform the paper of the impending takeover—the story made the front page Thursday morning. Members of the Duke community first learned of the Takeover when they picked up the morning paper:

"About 75 Afro-Americans students seized the first floor of the Allen Building early this morning. They have barricaded themselves in at both ends of the building and have warned they will burn the files containing nearly all student records if police are sent in. They have renamed the building, 'The Malcolm X Liberation School.'"

In response to the news of the Takeover, Duke students hastily organized a public forum at 11:30 am on the main quad. Several students and faculty members, including administrator Dean William Griffith, discussed the takeover and the thirteen demands of the Afro-American Society. 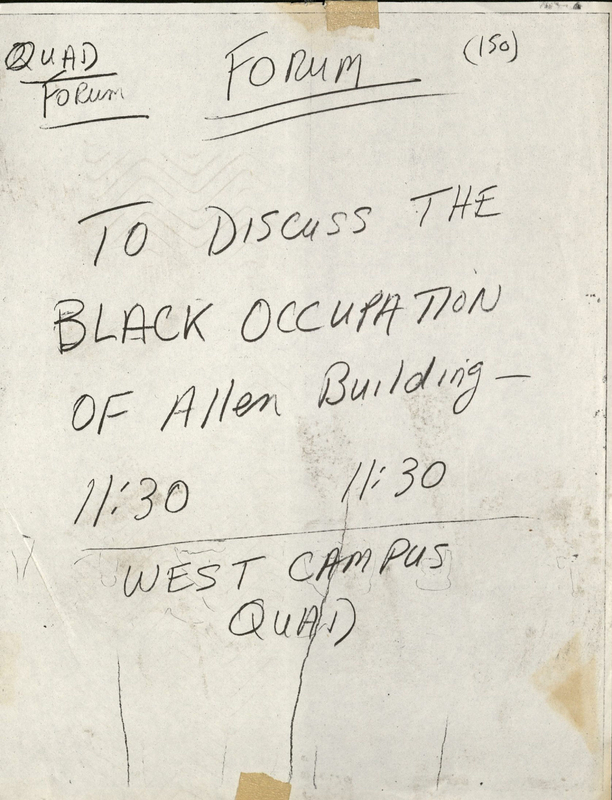 Later, white students held a "Sympathy School" in classrooms on the upper floors of the Allen Building from 12:00-2:00 pm to discuss how best to support the black students who were occupying the first floor.

After holding several small meetings, a larger group of supportive white students gathered in the Chapel at 2:30 pm where they decided on a collective plan of action: surround the Allen Building.

At 3:30 pm, Provost Marcus Hobbs issued a one-hour ultimatum to the black students at 3:30 pm, urging them to leave the Allen Building by 4:30 pm.

By the late afternoon, over 400 white students surrounded the Allen Building to protect the members of the Afro-American Society who were still inside. 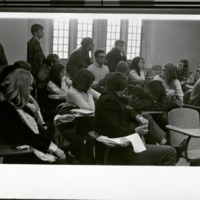 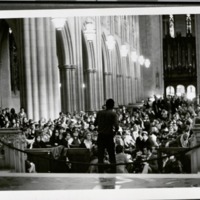 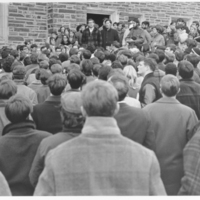 Students outside of Allen.

Duke Faculty met in Baldwin Auditorium on East Campus at 4:00 pm where President Knight informed them that the police had already been called. Forty faculty members left at 4:30 pm. The majority of the remaining faculty voted to pass a resolution that supported the administration's decision and condemned the Afro-American Society's actions:

"In view of the progress being made in the attempt to resolve pressing Afro-American student concerns on the campus, and in view of the frank recognition by the administration and Faculty that much remains to be accomplished in this area, and will be accomplished in an orderly way; This Faculty goes on record as condemning the action of the student groups in occupying the Central Records Office of Allen Building and threatening the loss of the irreplaceable academic records of students past and present of the University; And furthermore, it pledges its support to the administration as it moves forward to provide not only law and order within the University but justice and equal opportunity as well for all students."