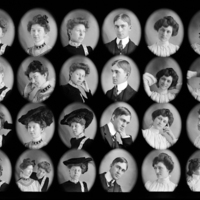 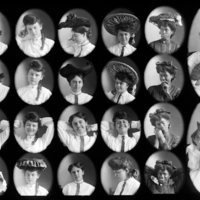 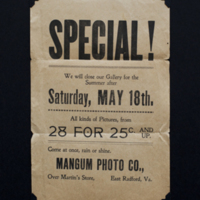 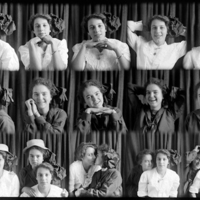 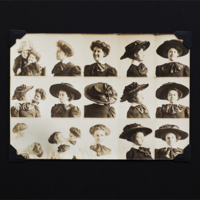 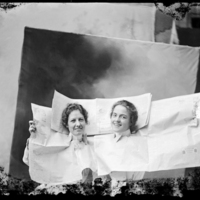 Over the course of his thirty-year career, Mangum used several types of cameras and formats. Glass plate negatives ranging in size from 4x6 to 8x10 were recovered from the family home at West Point on the Eno, in the tobacco pack house where Mangum built his first darkroom. The largest cameras were reserved for the permanent studios Mangum and his partners maintained in the Virginia towns of Pulaski, Roanoke and East Radford, and also Mangum’s Cottage Studio, located in downtown Durham near the Jourdan Transfer building which once stood on the corner of Main Street and South Corcoran. Mangum traveled the rails in a passenger train and at times in a manually propelled handcar, likely packing a 5x8 field camera, a Penny Picture Camera, a tripod and homemade backgrounds and reflectors inside his well-used leather trunk. As he traveled throughout North Carolina and the Virginias in search of business, he set up temporary studios in tents and empty store spaces. Between 1903 and 1912, Mangum had a habit of recording the locations and dates of his travels on the lid of his trunk. His visits ranged from one day to three months.

The Penny Picture Camera was designed to allow the exposure of isolated sections of the negative. Depending on the template, which was placed directly in front of the film, one glass plate might contain anywhere from 6 to 24 images. This was ideal for creating inexpensive novelty pictures as multiple subjects could be photographed on one negative, reducing cost and labor. Mangum often advertised 25 pictures for 25 cents and also sold photo buttons, two for 25 cents and up. The Penny Picture Camera worked in a step-and-repeat process in which the negative holder was repositioned behind the lens after each exposure, thereby allowing for multiple and distinct exposures to be made on a single glass plate negative. Starting at the top left, the holder would be moved down after each shot. When the bottom was reached, the holder would be moved to the right and then moved upward. This sequence was repeated until the negative was full. The order of the images on the negatives represents the order in which Mangum’s sitters entered the studio, the negatives reasonably representing a day’s work. At the end of each day, Mangum developed and printed the negatives — sometimes using the water of a nearby stream to mix chemicals and wash the prints — and the sitters returned in the morning to retrieve the pictures ordered the day before.

The prints in the physical exhibition are made from high-resolution digital scans of Mangum’s glass plate negatives and printed on archival inkjet paper. The images are printed at a larger scale than Mangum’s original prints so that the details, especially in the penny pictures, can be more clearly seen and appreciated. Mangum’s original prints were made as contact prints and reflect the size of the negative with which he was working.