I Sing the Body Electric: Walt Whitman and the Body 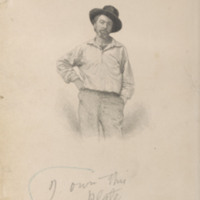 Walt Whitman (1819–1892), one of America's best-loved poets, left behind a body of work celebrating the body itself. This exhibit showcases Whitman's musings about the human body in the context of his literary work, life, and the world he lived in. Whitman's poetry frequently examined the connection between the physical and spiritual, and he often used physical descriptions of himself as part of his own mythologizing. He was also interested in health theories and fads of the time and was strongly influenced by the time he spent comforting Civil War soldiers in hospitals.

Items in this exhibit are chiefly drawn from the Rubenstein Library's Walt Whitman Papers, 1841–1940 — one of the most significant collections of Whitman manuscripts and publications in the world — and from the History of Medicine Collections. Featured heavily in this collection are several editions of Leaves of Grass, such as the printer's proof of the 1855 first edition and the printed first edition itself, as well as an autographed presentation copy of the fourth edition from 1867. Also on display are selections from drafts of Leaves of Grass, along with other drafts full of scribbles and scratch-outs that show Whitman's process of idea generation and constant re-writing.

Poetry and the Body →
Introduction