Lowy’s powerful and arresting color photographs taken through Humvee windows and military-issue night vision goggles capture the desolation of a war-ravaged Iraq as well as the tension and anxiety of both U.S. soldiers and Iraqi civilians. To photograph on the streets unprotected was impossible for Lowy, so he came up with the brilliant approach of making images that illuminate this difficulty by shooting through the windows and goggles meant to help him, and soldiers, to see. In doing so he provides us with a new way of looking at the war—an entirely different framework for regarding and thinking about the everyday activities of Iraqis in a devastated landscape and the movements of soldiers on patrol, as well as the alarm and apprehension of nighttime raids. 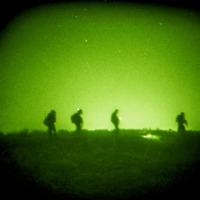 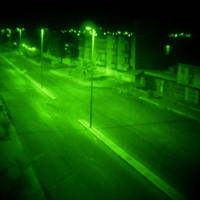 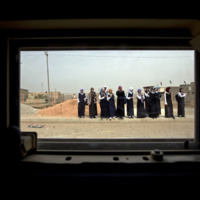 These images were practically asking to be in a book together-everything about them-the conception, the subject, the fact that we're still at war, the way the pictures were taken. Benjamin's work is an opportunity to see as an American soldier sees when in Iraq-nobody I know of has ever shown that, especially through night vision goggles.
William Eggleston

Lowy received a BFA from Washington University in St. Louis in 2002 and began his career in 2003 when he joined Corbis and embedded with the U.S. Army’s 101st Airborne Division to cover the Iraq War. In 2005 Photo District News chose Lowy’s Iraq images as some of the most iconic of the start of the 21st century. Lowy’s photographs appear regularly in national and international such publications as the New York Times Magazine, Newsweek, Fortune, the New Yorker, Vanity Fair, Stern, and Rolling Stone. His work has been exhibited at San Francisco MOMA, Tate Modern, Open Society Institute’s Moving Walls, Noorderlicht Photofestival, Battlespace, and the Houston Center for Photography, among others.

The Rubenstein Library acquired the exhibit photographs through the generosity of the Honickman Foundation established by Lynne Honickman.  Harold Honickman sits on the board of the Honickman Foundation and is a member of the Duke University Library Advisory Board. The gift of Benjamin Lowy’s photographs supports the Rubenstein Library’s commitment to acquiring photographic collections that have artistic merit and that reflect the visionary purposes and documentary impulses of their creators.