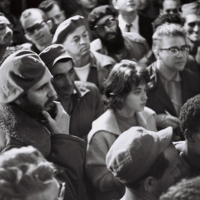 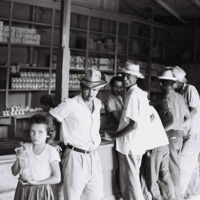 Deena Stryker was a journalist who traveled to Cuba with her camera in the early years of the Revolution. Her black and white photographs open a window onto an unsettled time, after the Missile Crisis and before Che's departure for the Congo, when Fidel Castro was solidifying his control over the revolutionary government.

Stryker captured images of both leaders and ordinary people living through extraordinary change. Included in the exhibit are portraits of Fidel and other young comandantes -- from Raúl Castro and Ramiro Valdés, Cuba's current president and vice-president, to Celia Sánchez and Vilma Espín, the revolution's earliest female leaders -- as well as historical events of the time such as the "Marquitos" trial and the U.S. capture of Cuban fishing vessels off the coast of Florida.

The photographs also document the everyday forms of revolutionary socialization taking place during these early years. Rural students arrived in Havana to attend newly-created boarding schools in the abandoned mansions of the rich, even as idealistic urban youth flocked to the countryside to teach literacy. New housing for the poor in Habana del Este dramatically expanded the capital and transformed it, even as such iconic sites of bourgeois pleasure as concert halls, restaurants, hotels and elegant shops were made over as of and for the people. The exhibit includes scenes of Afro-Cuban life that offer a glimpse into the changing status of blacks in Cuban society, as the revolution formally ended public segregation even while continuing to marginalize Afro-Cuban cultural forms like music, dance and religion. This was a transitional time in Cuba's history, one in which revolutionary ideals were simultaneously being implemented in everyday life and battered by the pragmatic realities of Cold War international politics. Those trends and their significance for Cuba studies today will be discussed during an academic panel accompanying the exhibit opening and reception on September 16th in the Perkins Library Rare Book Room.

A note about the Deena Stryker Photograph Collection:

The collection is primarily composed of negatives, contact sheets, and proof prints processed by photographer Alberto Korda for Stryker while she was in Cuba. The entire collection is accessible online at https://repository.duke.edu/dc/stryker