(we know) (we've been here) : uncovering a legacy of student & employee solidarity 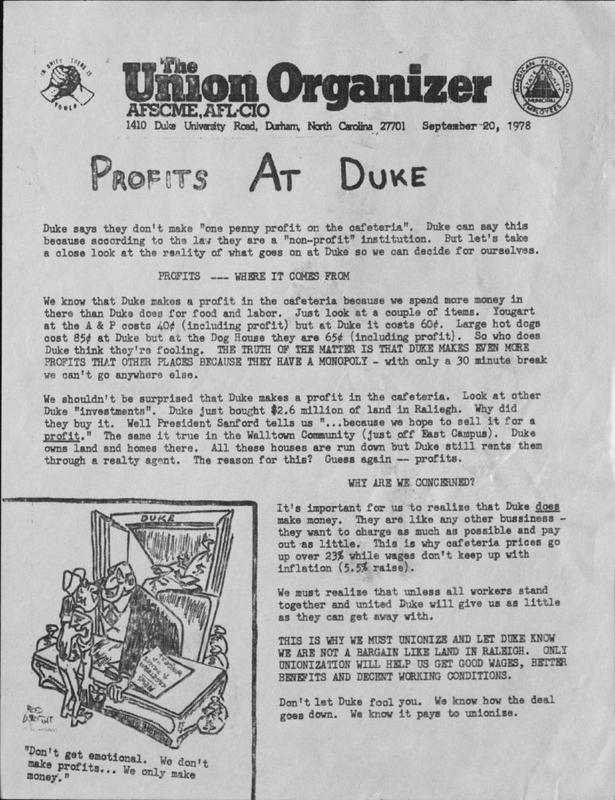 In the spring semester of 2016, I was one of the founding members of Duke Students and Workers in Solidarity, a coalition of Duke undergraduate and graduate students, current and former employees, faculty members, and Durham community members who protested the University’s labor conditions, and especially the treatment of low-wage contracted workers and employees of color.

Hundreds rallied outside the Allen building, which had been filled with tents and deemed “A(bele)-Ville.” Inside, nine of us laid out sleeping bags in the administrative offices for a week-long sit in, while across the country people tweeted about #DismantleDukePlantation, #TakeOutTheTrask, and #FightFor15.

While at schools across the country, sit-ins in administrative offices have long been tactics of campus activists (This year, see UC Davis, OSU, and Clemson), (EDIT) this form of protest holds a particular place in the imagination of Duke students for its association with the Afro-American Associations' 1969 Allen Building Takeover.

As campus debate continues about DSWS, I'm reminded of the importance of the mythic history of campus events.  In the early 2000's, campus activist Eric Ludwig wrote about the erasure of workers, and specifically of coalitions of Black women, from contemporary accounts the events of the late 1960’s including the sit-in of '69 and the Vigil of '68. He responded to the portrayal of the Takeover as almost exclusively driven by Duke students by telling the stories of Hattie William, Viola Watson, Shirley Ramsay, and other black women leading Duke's 1960's labor struggles. (Ludwig) The past few years at Duke have seen similar acts of erasure in accounts of the Afro-American Society's Allen Building 1969 Takeover.

The past few years at Duke have seen similar acts of erasure in accounts of the Afro-American Society's Allen Building 1969 Takeover. What's more, while the University has continued, in a limited capacity, to celebrate "student activism" of the late 1960s, it is conspicuously silent about the role of labor organizing on campus, with little, if any, demonstrated effort to uplift the narratives of anti-racist labor struggles, women, femme, and queer-led campaigns, or student and employee coalition building.

This zine and accompanying collection of primary documents introduce a new timeline of student & employee solidarity at Duke. It's title, (we know) (we've been here), is a reminder of the deep resilience and knowledge of those who have been forced to the margins by Duke generation after generation. Click through the zine for a narrative contextualizing the 2016 Allen Building Sit In of Duke Students & Workers in Solidarity. Or, go through decade by decade and explore the newly-digitized documents from Duke University Archives about student & employee struggle throughout the past 50 years of Duke history.

I should note that University Archives has hundreds of boxed with information on this topic that remain undigitized (and even unexplored). Even if they were all here, I recognize the limitations of a University Archives to document the populations it has historically overlooked and exploited. I dedicate this work to all for whom Duke has ever been, or ever will be, a site of struggle against oppression, to the black and brown workers whose names I don't know but on whose labor I stand, and to my co-conspirators, accomplices, and chosen family in DSWS.

We see you, we love you. Lara. 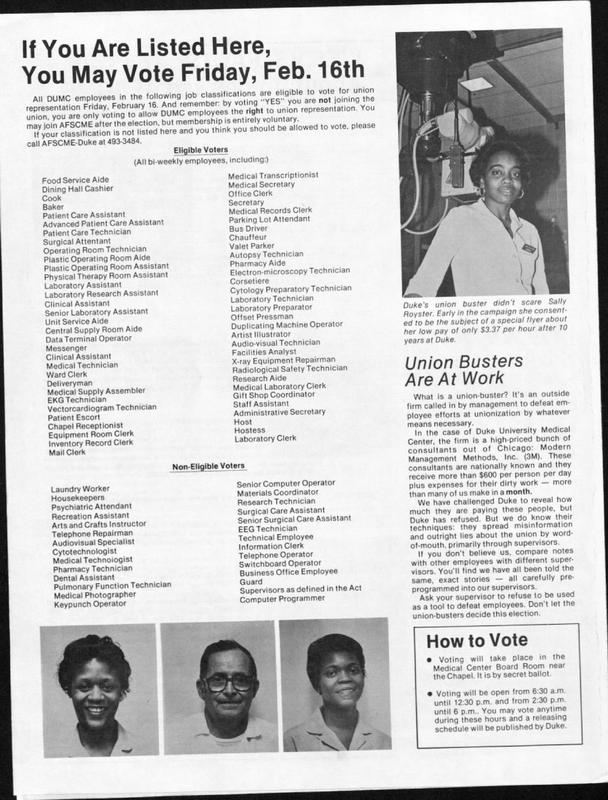