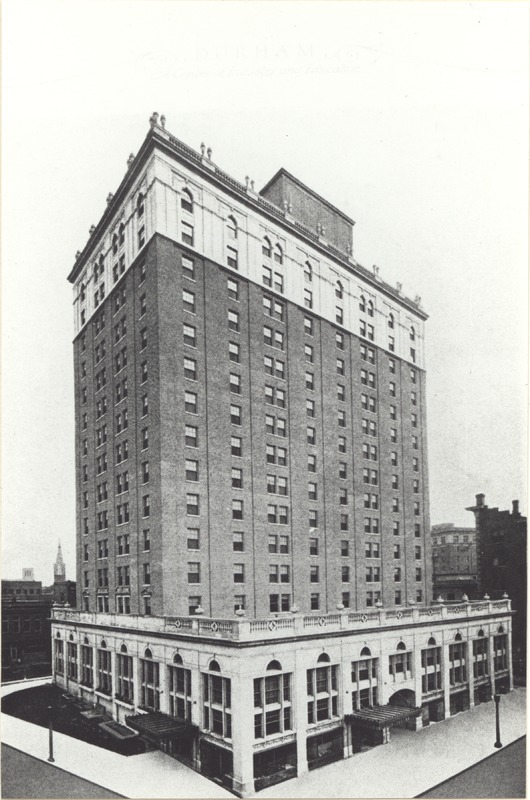 On November 21, 1924, a time capsule was assembled and placed in the cornerstone of what was to become the Washington Duke Hotel. It opened in October as Durham’s first—and only—hotel. A number of prominent citizens, led by businessman John A. Buchanan, banded together to raise the funding for the building. In a booklet distributed to raise interest and funds for the hotel, it was written, “The coming of this fine, distinctive New Hotel does not mean merely a new hotel for Durham. It means far more than that. It means Durham will have a real civic, social, and commercial center, for around the New Hotel will radiate every big function that transpires in our city.”

For fifty years, the Washington Duke Hotel stood at the center of downtown, a place where visitors and Durham residents alike gathered. It was the site of conferences, dances, speakers, and celebrations. In 1975, the hotel was deemed no longer profitable and it was imploded. Amazingly, however, an anonymous person saved the time capsule, and later brought it to the new Washington Duke Inn, which opened in 1989 adjacent to Duke’s West Campus. In 2015, this time capsule was transferred to the University Archives.

Sincere thanks to Sheena Cooper and the staff of the Washington Duke Inn & Golf Club for making this exhibit possible.

On display in Sperling Lobby