"Cherry Blossoms Among Magnolias?": A History of the Asian American Experience at Duke 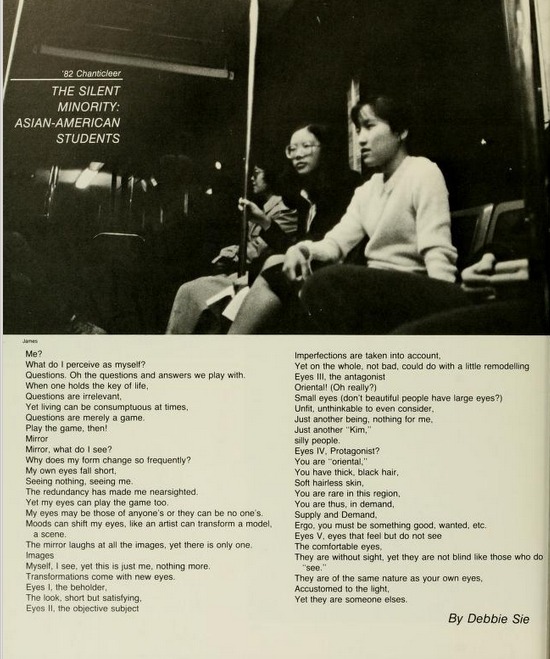 In 2016, students of Asian descent make up close to 30% of the undergraduate population at Duke (22% of students identifying as Asian American along with a considerable percentage of Duke’s many international students who hail from Asian nations).[1] Despite the exponential growth of Duke’s Asian population over the last twenty-five years, very little has been done to chronicle and exhibit the histories of the Asian experience at Duke, some of which date back to Duke’s Trinity College days in the late 19th century.

It is my hope, through this exhibit, to display how the Asian and Asian American experience at Duke has evolved over the years from when Duke was a small, provincial Southern college rising out of the tobacco mills of Durham to the international university it is today. Moreover, as an Asian American student myself attending what has traditionally been a historically white university, I hope to raise a more heightened sense of consciousness on what it truly means to be a student of Asian descent at Duke. I am fully aware that the concept of "Asian American" in many ways is a Western construct, an easy way for Nixonian bureaucrats to classify diverse groups of people each with their own unique histories and cultures into a concept white America can at least partially comprehend. My exhibit attempts to acknowledge these differences, but also acknowledges that in many ways "Asian Americans" of all groups share similar experiences, especially at historically white universities such as Duke.

Cherry Blossoms are a flower traditionally associated in the minds of many Westerners with the “Orient,” while magnolias have often been associated with the Old South. Both regions and its people, the “Orient” and the American South, have been heavily mythicized in Western culture.[2] By juxtaposing a stereotypical image of “Oriental” charm with that of “Southern” charm, the title of my exhibit also calls on the observer to face the many social and racial issues within Duke’s Asian American community, such as confronting the stereotypes of “model minority” and “perpetual foreigner.”

Note: for the audio portions of the exhibit, it is advised to use headphones due to the mediocre quality of the recordings.

Duke University, Trinity College of Arts and Sciences Class of 2019