After Desegregation: Finding a Voice 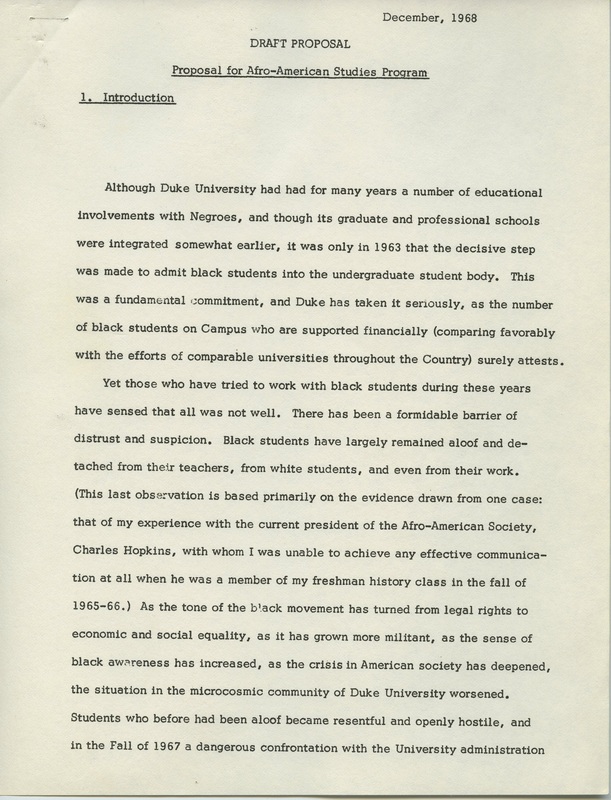 The Draft proposal for an Afro-American Studies program, written by John W. Cell, Department of History, in December of 1968. 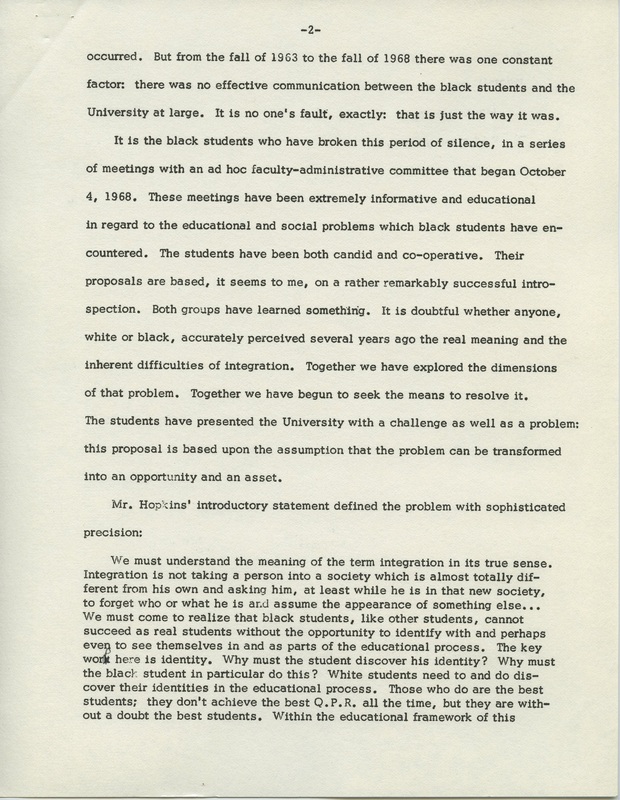 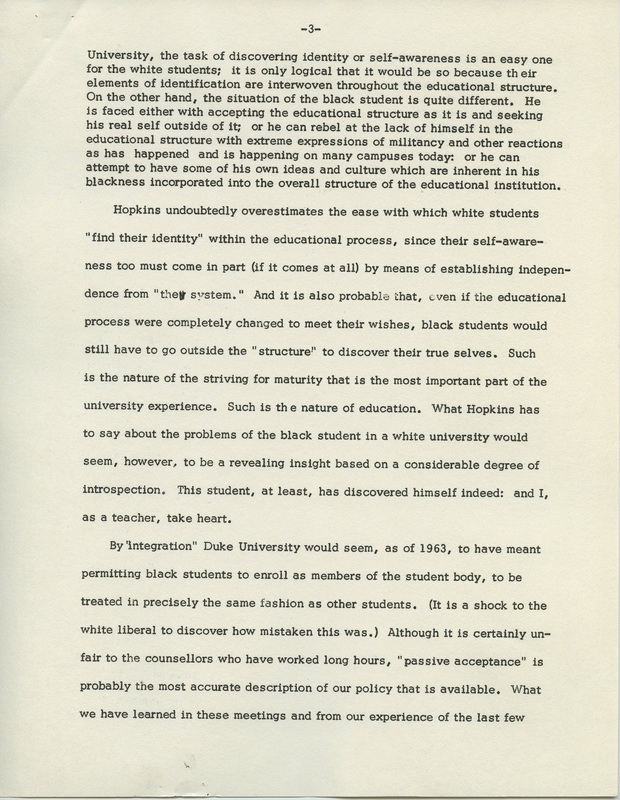 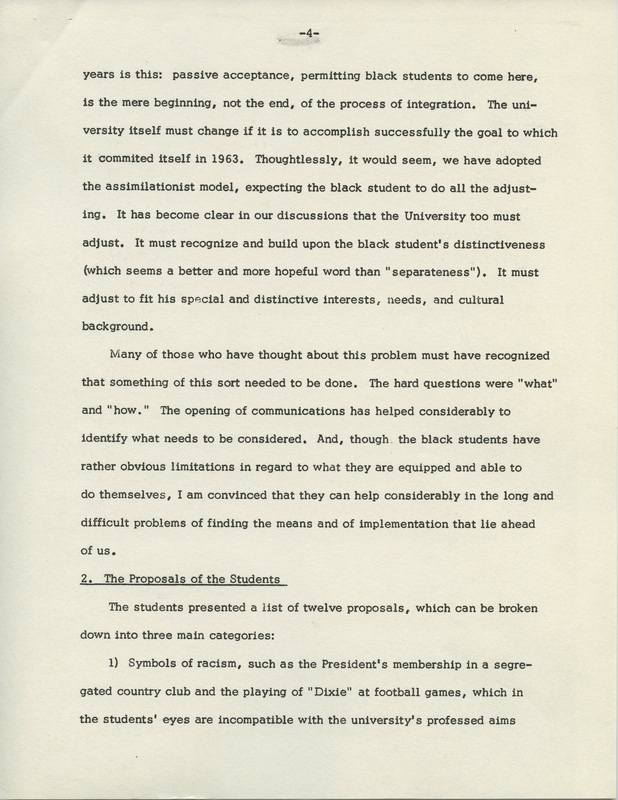 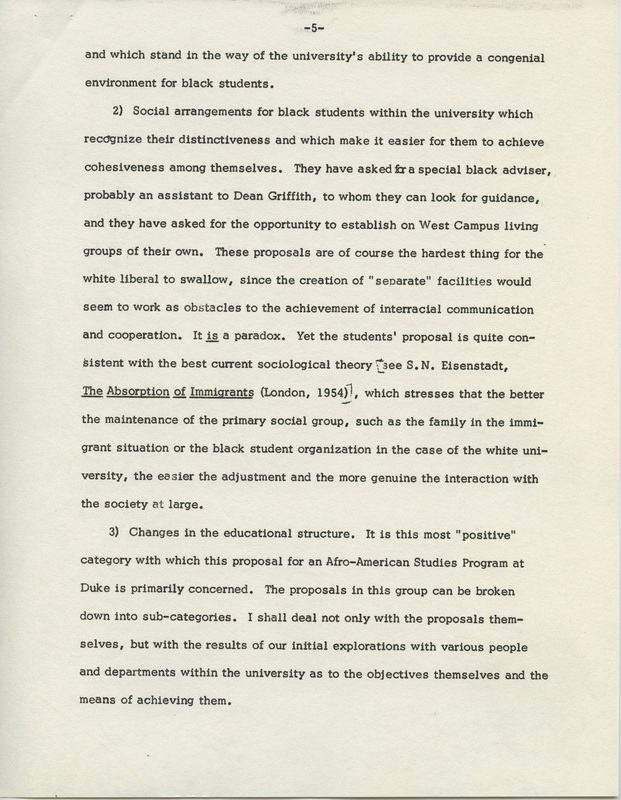 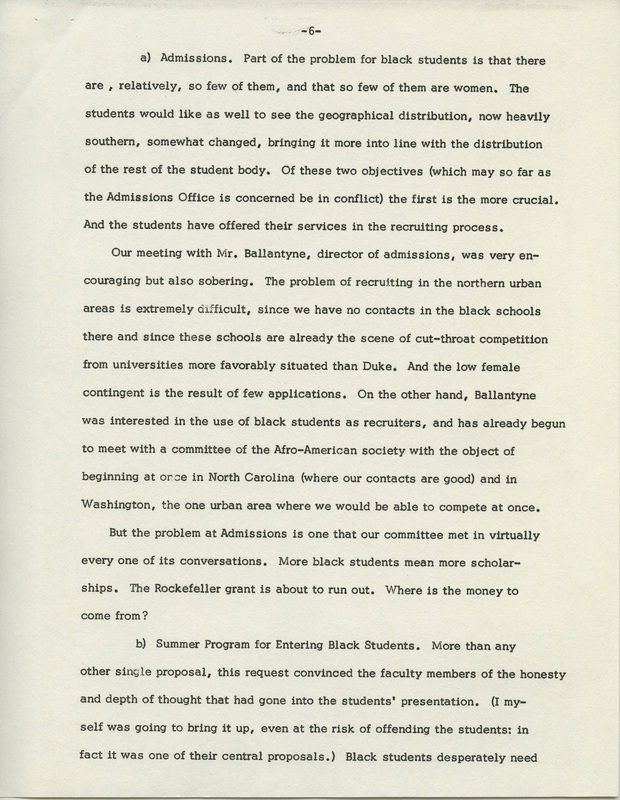 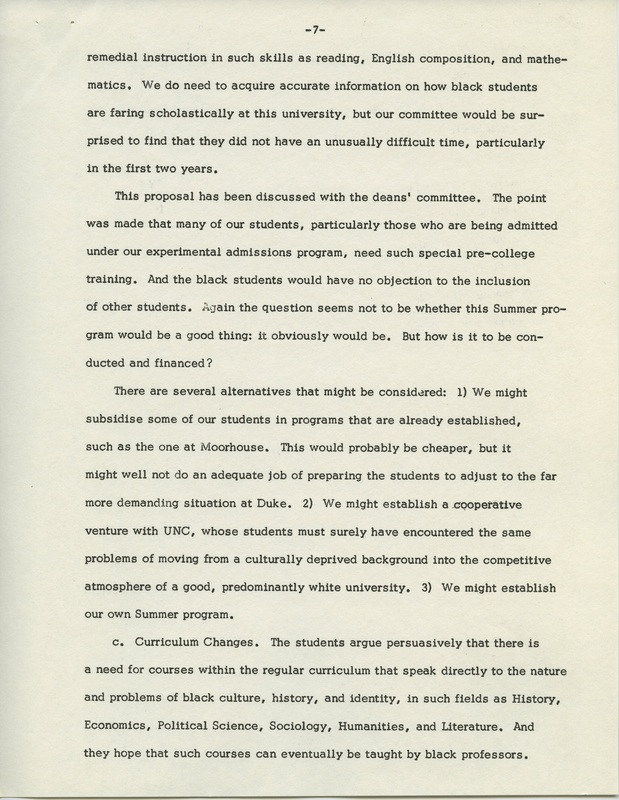 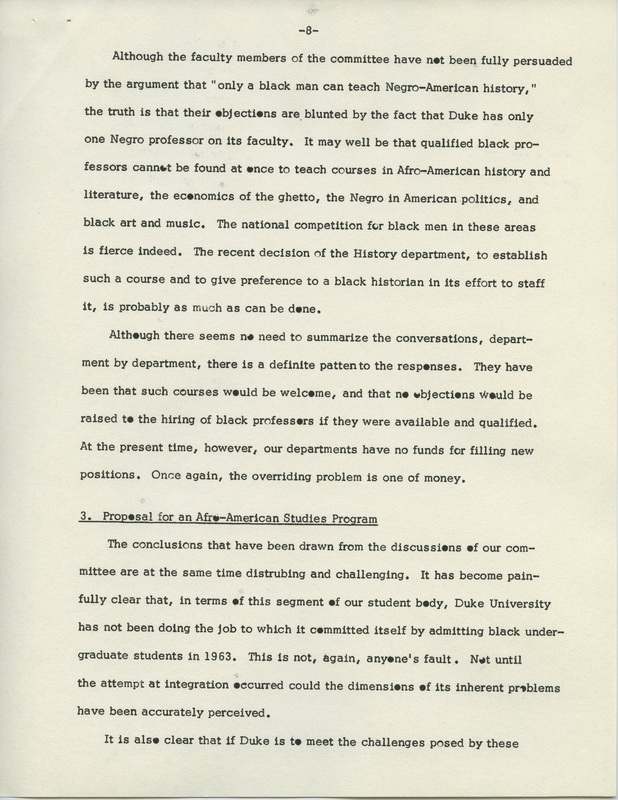 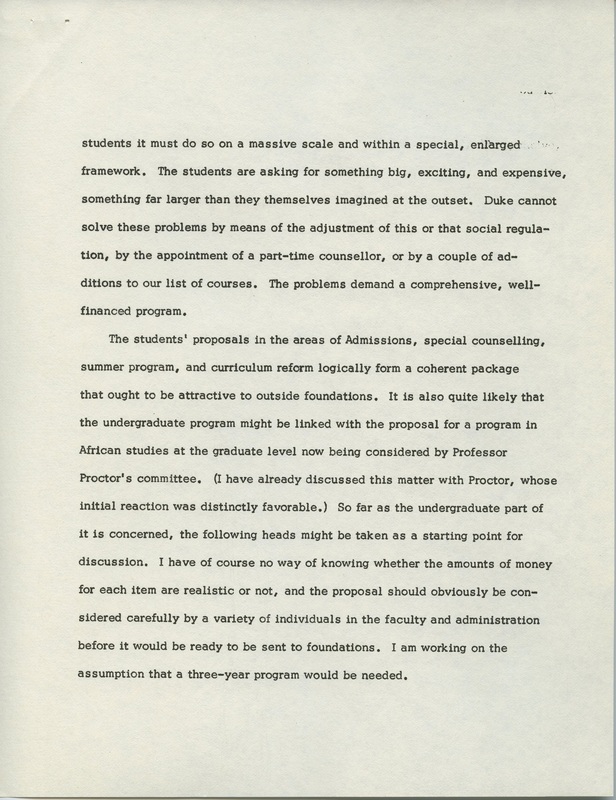 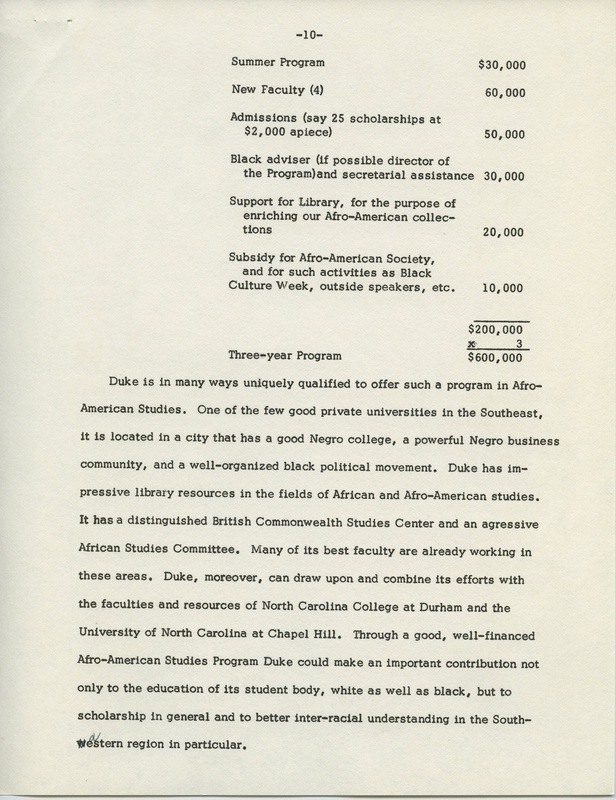 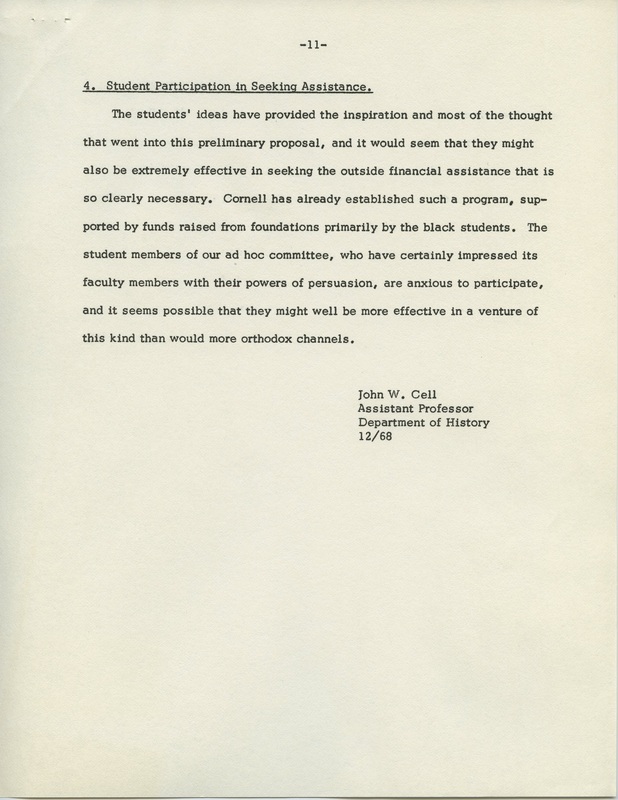 Desegregation was only the first step towards creating a more inclusive university community.  On November 13, 1967, black students held a “Study-In” in President Knight’s office in the Allen Building to protest the use of segregated facilities by Duke organizations, such as dances and events held at all-white country clubs.

In fall 1968, students pushed for Duke to establish an African and African American Studies curriculum.  No such curriculum was established by faculty or administrators, and within months, students began to take direct action.

In response to the assassination of Dr. Martin Luther King, Jr., students held a silent vigil in front of the Chapel, April 5-11, 1968. During this time, students petitioned President Knight for just wages for Duke’s service and cafeteria workers, most of whom were black and earned below-average wages. 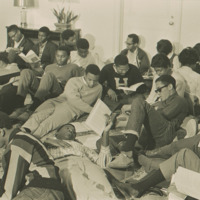 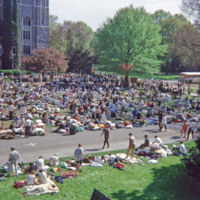 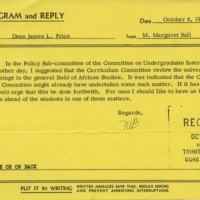 On February 13, 1969, African American students staged a takeover of the Allen Building, renaming it the “Malcolm X Liberation School.”  Their demands included better financial aid for black students and the establishment of “a fully accredited department of Afro-American studies.”  Though the African American students exited peacefully, a large number of other students remained outside the building, and police used teargas to disperse the crowd. 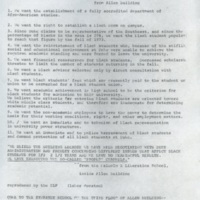 "The Black Demands" from the Allen Building Takeover 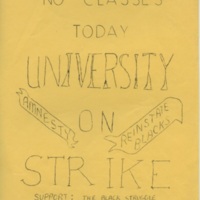 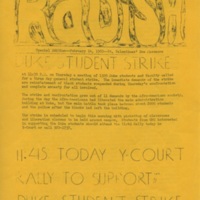 In the decades after the protests of the 1960s, the African American community worked to shape the Duke community.  The first African American fraternity chapters at Duke (Omega Psi Phi and Alpha Phi Alpha) were established in 1974 and 1975, respectively, followed by the sororities Alpha Kappa Alpha and Delta Sigma Theta in April 1975. The Mary Lou Williams Center for Black Culture was founded in 1983. 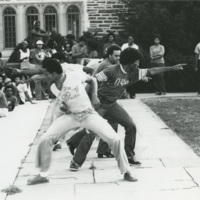 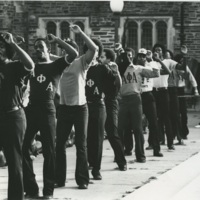 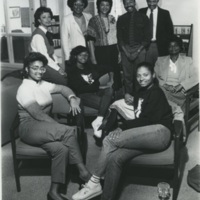 Staff of the Mary Lou Williams Center for Black Culture