The Future is Female,
and So Was the Past 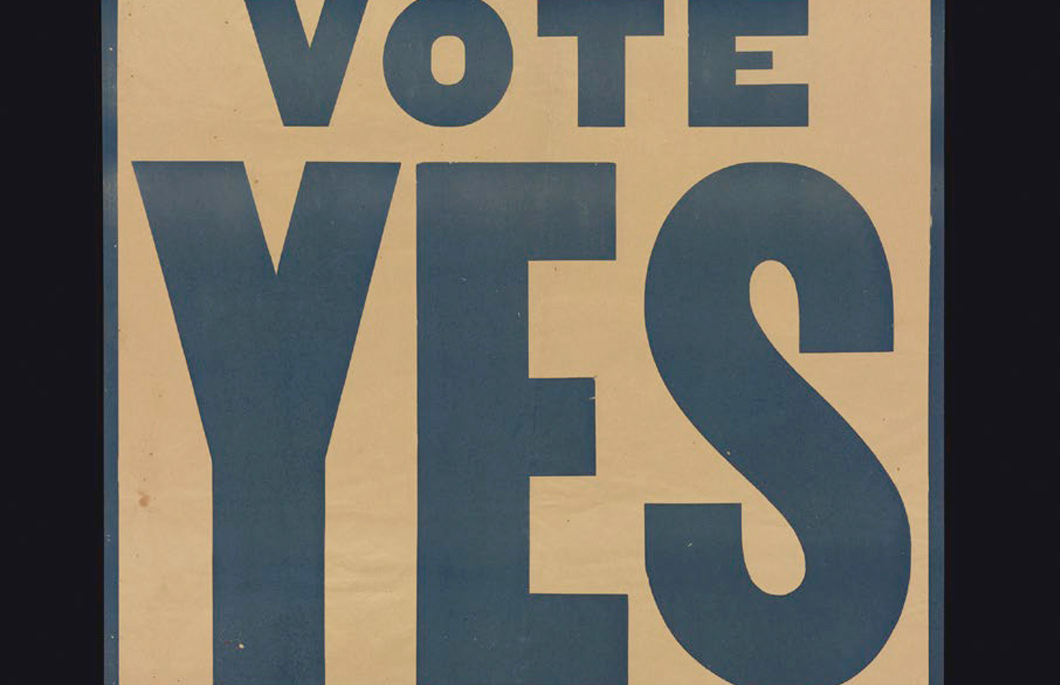 This large poster was printed to get out the vote for the suffrage referenda held in Massachusetts, New York, and Pennsylvania on 2 November 1915. The posters were printed by the Empire State Campaign Committee and hung in New York City's theaters.
(view fullsize version)

Lisa Unger Baskin placed her remarkable collection on women and work with Duke's Sallie Bingham Center for Women's History and Culture, part of the David M. Rubenstein Rare Book & Manuscript Library, in April 2015. Carefully assembled over forty-five years, this rich and extensive collection is complemented by a body of later twentieth-century works as well as reference materials that together create a deep, vast, and multi-faceted body of material. Baskin's lifelong passion for collecting and preserving women's history resonates deeply with the mission of the Bingham Center. Her approach to collection building is a kind of activism itself, and in that respect it shares much in common with the work of the Center. Baskin's papers documenting her life and work as a collector will also come to Duke. This is especially exciting given the increasing attention to and recognition of the contributions of women collectors.

The Lisa Unger Baskin Collection aligns perfectly with the strengths and character of collections throughout the Rubenstein Library, especially with our signature collections in women's history, African American history, the history of medicine, advertising and marketing, and the history of economics—all areas Baskin has attended to in building her collection. In Baskin's own words, the unifying thread binding everything together is that “women have always been productive and working people, and this history essentially has been hidden.”

Working with the Lisa Unger Baskin Collection in the context of the Rubenstein Library and its related collections—conducting research, teaching, making art, doing activism—supports the powerful and provocative assertion first made by 1970s lesbian feminists, and more recently during the 2016 U.S. presidential election, that the Future is Female. The collection makes visible and tangible the labors and achievements of women from every walk of life—printers, publishers, scientists, sweatshop workers, artists, activists, scholars, craftswomen, pieceworkers, midwives, and businesswomen—and, in doing so, challenges our understanding of women's history and contributions. In other words, the past is female—at least as female as it has been popularly assumed to be male.

Given their shared emphasis on women's social history, the LUB Collection and the Bingham Center together form a spectacular body of material documenting women's daily lives. The strengths of the two collections dovetail, from feminist and labor movements to arts, literature, and medicine. For example, the LUB Collection includes important manuscripts and publications from suffrage leaders, such as correspondence from Susan B. Anthony, Elizabeth Cady Stanton, Lucretia Mott, and Lydia Maria Child. It also features the most complete run known of Anthony and Stanton's The Revolution (1868–1872)—the first women's rights weekly journal—which confronted taboo subjects such as sex education, domestic violence, prostitution, reproductive rights, unionization, and discrimination against female workers. These materials are now in conversation with the Bingham Center's rich collections documenting other women's rights struggles in the American South and around the country from the nineteenth century to the present.

Women artists and makers is another area of deep shared focus. Painters, illustrators, bookbinders, embroiderers, and graphic designers are just some of the artists represented in the LUB Collection. Researchers will find woodcut illustrations by sixteenth-century artist Geronima Parasole, exquisite bindings by the British binders Sarah Prideaux and Katharine Adams, and a book of hand-painted etchings and pochoir on linen by American multimedia artist Faith Ringgold, just to name a few. These materials join the Bingham Center's collections documenting women makers, from the personal and professional papers of artists and craftswomen to prescriptive literature offering instruction in music, needlework and other arts, as well as an extensive collection of artists' books by women. The LUB Collection also holds a significant body of early photographs by women, offering a unique window on the history of photography and women's contributions to it as artists and businesswomen. These materials can now be studied alongside an array of historical and modern photographic images of women held by the Rubenstein Library that document the working lives of women photographers.

Left: This broadside promotes the free introductory lecture to a course on physiology being offered by Dr. Mary J. Scarlett, Professor of Anatomy at the Women's Medical College of Philadelphia. The WMCP was the first medical school for women authorized to award the M.D. Right: Arabella Buckley, an accomplished science writer, framed The Fairyland of Science (1893) as a series of lectures for children. Among other works, she edited the tenth and last edition of Mary Somerville's On the Connexion of the Physical Sciences (1877).

The Rubenstein Library's holdings documenting the lives of African Americans, already impressive, are immeasurably deepened by the LUB Collection. Lisa Baskin has assembled an enormous range of manuscripts, printed works, and artifacts related to slavery, anti-slavery movements, and abolition. The researcher could start with an 1803 deed of emancipation for Susannah Mallory, who paid for her own freedom, or perhaps with The Anti-Slavery Alphabet (1846), an illustrated reader sold at the Anti-Slavery Fair in Philadelphia, which in turn complements an abolitionist dessert service (also produced for sale at a fair). There are also two editions of the iconic Narrative of Sojourner Truth (New York, 1853, and Battle Creek, Michigan, 1878), and a metal token sold by the American Anti-Slavery Society (1838). The history of African Americans pursuing education can be explored through published and unpublished materials, from a rare pamphlet by Rev. Alexander Crummell entitled Hope for Africa: A Sermon on Behalf of The Ladies' Negro Education Society (London, 1853) to a silver gelatin photograph taken in 1896 of African American students in a school in Atlanta, Georgia. Among the many items documenting literature and the arts is a signed first edition of Phillis Wheatley's Poems on Various Subjects Religious and Moral (London, 1773), the first book published by an African American. These remarkable materials join the Rubenstein Library's extensive collections documenting the lives of African Americans in the nineteenth century and Jim Crow era, the personal and professional contributions of African American educators and other public intellectuals, as well as the Civil Rights Movement, to name a few areas of particular strength.

The LUB Collection also provides a lens through which to explore the under-documented history of women in science and medicine. Among other monumental works on women's reproductive health, the collection includes Observations diuerses, sur la sterilité, perte de fruict, foecondite, accouchements, et maladies des femmes, et enfants nouueaux naiz (Paris, 1642), by Louise Bourgeois Boursier, the first book on obstetrics to be published by a woman. This volume, as well as a much later Dutch translation, joins other editions of the work held by the Rubenstein Library to create a deep resource for Bourgeois scholars, as well as for researchers of early obstetrical history. Together the LUB Collection and the Rubenstein Library's history of medicine collections create a comprehensive body of publications, from the well-known to the obscure, tracing the history of women's sexual and reproductive health and rights in the West. These include works by pioneers Margaret Sanger and Marie Stopes, as well as complementary holdings documenting women physicians like Elizabeth Blackwell, the first woman to receive a medical degree in the United States. Scientific works in the collection are wide-ranging, from On the Connexion of the Physical Sciences (London, 1858) by Mary Somerville, the first female member of the Royal Astronomical Society, to mathematician Maria Agnesi's two-volume Instituzioni analitiche ad uso della gioventu' italiana (Milan, 1748), and Maria Hack's Lectures at Home: Discovery and Manufacture of Glass, Lenses and Mirrors, the Structure of the Eye (London, 1834). 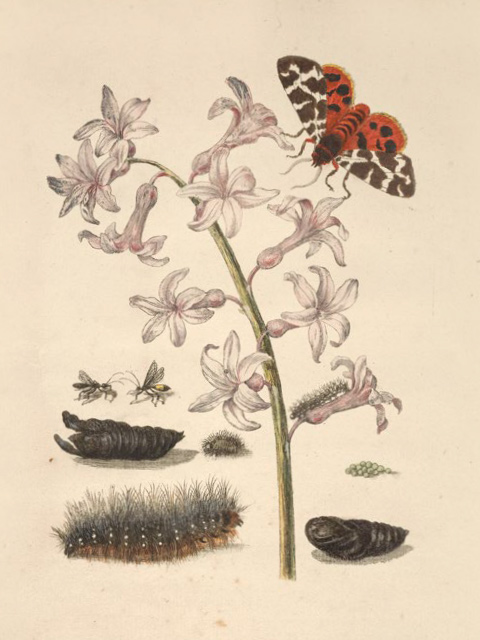 This counterproof image from Maria Sibylla Merian's Erucarum ortus (1718) depicts the full life cycle of one of the 186 insect species Merian directly observed and then captured in her stunning illustrations.

The LUB Collection has already brought many new opportunities in the relatively short time it has been at Duke. Faculty are excited that works they had long wished to use in courses are now available to them. For example, two works by seventeenth-century Dutch naturalist and illustrator Maria Sibylla Merian that offer the first visual documentation of metamorphosis in natural settings have been incorporated into several classes on the history of science that previously focused on male scientists.

The number of women scientists incorporated into these courses has steadily increased. In addition, long-standing classes on the economic history of women and the roles of women in the Renaissance now include a range of material from the LUB Collection, from a position statement by the mid-nineteenth-century woman-led Free-Labour-Produce Association in the Parish of Walthamstow, Essex (outlining the members' commitment to purchasing goods produced by free laborers) to Judith Drake's 1697 Essay in Defence of the Female Sex, one of the first works to use a rationalist argument in support of education for women.

New courses inspired by the LUB Collection are also beginning to emerge. One example, Women's Medicine in Western History, included many items from the collection, such as home health and self-care guides like the Ladies' Indispensable Assistant (New York, 1852) and Our Bodies Ourselves: A Course By and For Women (Boston, 1970), as well as letters and publications by Margaret Sanger and Elizabeth Blackwell. Students in the class developed an exhibition of these and other items, with their own commentary added. In another example of public storytelling, a team of three undergraduates and one graduate student completed a six-week research intensive that created new narratives documenting women in labor movements through Rubenstein Library collections. The online guide and exhibits developed by the team feature LUB Collection items, from manuscripts documenting the work of enslaved women to the letters of American anarchist and labor activist Emma Goldman. 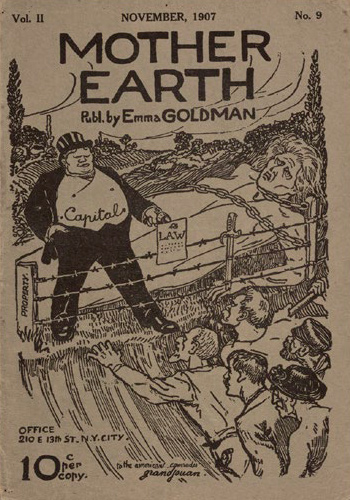 Anarchist Emma Goldman published the radical journal Mother Earth from 1906 to 1918. Articles covered birth control, the labor movement, sexual freedom, and the arts, among other topics.

The exhibitions at Duke and the Grolier Club described in this catalogue invite the public to see the Lisa Unger Baskin Collection for the first time. A conference at Duke in April of 2019—to be introduced by anthropologist, educator, museum director, and college president Professor Johnnetta Betsch Cole—will explore the social history significance of the LUB Collection. Panel presenters will offer perspectives from a range of disciplines, from micro-history and economics to cultural and visual studies, Afrofuturism, science and technology studies, critical theory, and gender and sexuality studies. Professor Nell Irvin Painter, artist and renowned scholar of African American history, will provide the keynote for a conference at the Grolier Club in January 2020. This gathering will explore women’s contributions to book collecting and book history. Speakers at this conference represent a constellation of professions, from rare book and manuscript sellers to book designers, artists, art historians, curators, and librarians. These conferences and a range of smaller events will offer visitors a chance to experience the collection directly and to see for themselves that "women have always worked."

As Lisa Baskin predicted when she selected Duke to be the repository for her collection, it has become an "integral part of the university where it is helping to transform and enlarge the notion of what history is about." The LUB Collection adds critical new dimensions to existing Rubenstein Library collection strengths and is creating new researcher communities within and beyond Duke. What has been hidden is being revealed—the future is female, and so was the past!