Memoir as Inspiration and Advocacy

Accounts of mental illness and treatment for it, fictional and factual--along with Darkness Visible--bring the suffering of depression and other illnesses to light. These examples from the Rubenstein Library's collection critique the mental health establishment, reflective as it is of society at large--especially in its treatment of women, Black people, and others whose voices are minimized or dismissed.

Charlotte Perkins Gilman's fictional tale of her narrator's treatment by the male-dominated medical profession in the nineteenth century, as well as the autobiographical accounts of depression in Meri Nan-Ama Danquah's Willow Weep for Me and the collection of essays and poems by "psychiatric survivors" in Beyond Bedlam, demonstrate how the act of writing can promote awareness of mental illness, provide a therapeutic outlet for the authors, and make the case for alternative and improved treatments. 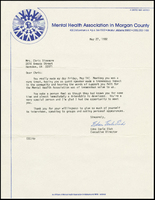 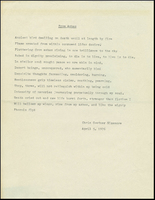 The papers of Chris Costner Sizemore, including drafts, diaries, and correspondence, document her struggle from an early age with dissociative identity disorder, her eventual successful treatment and recovery, and her years of advocacy on behalf of mental patients. A biography (1957) and film (1958) The Three Faces of Eve described her illness from the perspective of her psychiatrists, but Sizemore later told her own story through memoirs (I’m Eve, 1977; and A Mind of My Own, 1989), and explored her experience through poetry and figurative painting,

The influential feminist writer, literary critic, artist, and activist Kate Millett had bipolar disorder. While Millett indeed suffered from severe depression, she argued that her manic phases were often a positive source of terrific productivity and inspiration for her. But the reaction of her family to these episodes--several times taking the form of involuntary commitment to mental institutions--was truly damaging, as she described in her book The Loony-Bin Trip and other writings. Millett used narrative and drawing as self-treatment, a way to work through sadness and trauma, and was also an advocate for the mentally “ill” through organizations such as Mad Pride and the Network Against Psychiatric Assault. The Millett papers in Rubenstein Library document her writing, activism, and artwork, including works she created in the wake of a lover’s suicide.