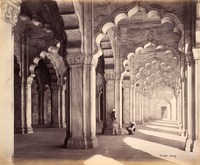 मोती मस्जिद Motī Masjid (Pearl Mosque) موتی مسجد
Built by Shāh Jahān (1592-1666), the Emperor who ordered construction of the Tāj Mahal, the Motī Masjid  is located in the Mughal capital city of Agra, near Delhi. Situated in a fort built by his grandfather, Akbar the Great (1542-1605), it is constructed of white marble (hence the name “Pearl”) in the Saracenic style, with multifoil arches. In his later years, Shah Jahan was confined by his son and successor Aurangzeb in this same fort until his death, in a room allowing a view of Tāj Mahal, the tomb of his beloved wife, Mumtāz. 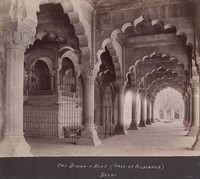 दीवान-ए-आम Dīwān-i-Aām (Hall of Public Audience) دیوان عام
In contrast to the Dīwān-i-Khās, where prestigious visitors were received, ordinary subjects and the general public could submit their petitions and pleas for justice in the Dīwān-i-Aām. This one is located in the Red Fort in Delhi. Even in the Dīwān-i-Aām the Emperor sat upon a magnificent throne. 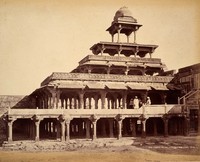 पंच महल Panch Mahal (Five Palaces) پانچ محل
The Panch Mahal, so called because of its five stories of red sandstone pillars, is one of the principle buildings in the Imperial Palace complex at Fatehpur Sīkrī. The building is thought to have been used by Akbar and the ladies of the harem for relaxation and entertainment. Originally, marble lattice screens of intricate geometrical design known as jālī formed cubicles, creating a cooler and more secluded environment. 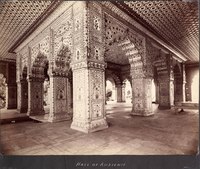 دیوان خاص Dīwān-i-Khās (Hall of Private Audience) दिल्ली का दीवान-ए-खास
Contrast this Dīwān-i-Khās located in Delhi’s Red Fort built by Shah Jahan in the early 1630s with the one in Fatehpur Sīkrī built by his grandfather Akbar less than a century earlier. The stylized floral designs and intricate geometric patterns in the white marble walls and pillars were created using highly polished, precisely cut and fitted semi-precious colored stones. The ceiling was originally inlaid with silver and gold. Above the corner arches is inscribed a verse attributed to the Muslim Sufi mystic, poet, musician, and scholar Amīr Khusrow: “If there be a paradise on earth, it is this, it is this, it is this.” 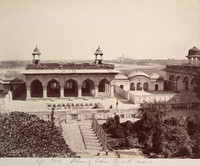 Palace of Akbar
The Emperor’s residence in Agra Fort. The Tāj Mahal can be seen in the distance. Built between 1565 and 1573 as a military establishment by the Emperor Akbar (who reigned 1556-1605) on the remains of an old mud fort, this fort is the predecessor of the Red Fort in Delhi. Shāh Jahān built most of the interior buildings (as well as the nearby Tāj Mahal), and renamed Agra Akbarabād in honor of his grandfather.

Screens Enclosing False Tombs inside the Tāj Mahal
The main chamber inside the Tāj Mahal contains false sarcophagi. Muslim tradition forbids elaborate decoration of graves, so the bodies of Mumtāz Mahal and Shāh Jahān were actually placed in a plain crypt beneath the inner chamber, with their faces turned towards Mecca. Inscriptions on the sides of Mumtāz’s sarcophagus list the 99 names of Allāh‎. An inscription on Shāh Jahān’s reads, “He travelled from this world to the banquet-hall of Eternity on the night of the twenty-sixth of the month of Rajab, in the year 1076 Hijri [January 22, 1666].” 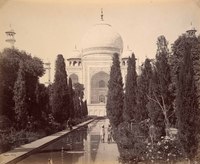 “A Tear-drop on the Cheek of Time.” -- Rabindranath Tagore

“[T]he jewel of Muslim art in India and one of the universally admired masterpieces of the world's heritage.” -- UNESCO World Heritage Site Award

“Not a piece of architecture, as other buildings are, but the proud passions of an emperor’s love wrought in living stones.” -- Sir Edwin Arnold

“The Taj represents the most highly elaborated stage of ornamentation reached by the Indo-Mohammedan builders, the stage in which the architect ends and the jeweler begins.”
-- Sir William Wilson Hunter

“A thing of perfect beauty and of absolute finish in every detail, it might pass for the work of a genii, who knew naught of the weaknesses and ills with which mankind are beset.”
-- Thomas Stevens 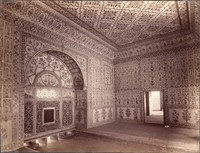 खास महल Khās Mahal (Private House)خاص محل
The Khās Mahal, the Emperor’s private living quarters in the Red Fort in Delhi, consists of three parts: a prayer room, a sleeping chamber, and a sitting room (pictured here). The channel in the center of the floor was known as the “Stream of Paradise” and functioned as an early form of air conditioning, drawing cool water from the nearby Yamuna River. 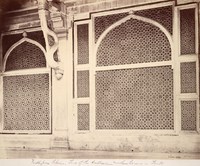 जाली Jālī (latticework screen) جعلی
Detail of jālī (net), a perforated marble screen from the tomb of the Muslim Sufi saint Salim Chishti. The intricately patterned geometric designs, characteristic of Mughal architecture, have practical value: air passing through the holes is compressed, increasing its velocity and providing a cooling breeze. 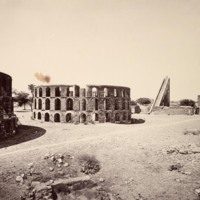 जंतर मंतर Jantar Mantar (Observatory) جنتر منتر
Raja Jai Singh of Jaipur built five observatories (Jantar Mantar) throughout North India between 1727 and 1733 in order to compile astronomical tables to predict the times and movements of the sun, moon, planets, and stars, and for astrological purposes (which, as in Europe at the time, were intertwined with scientific astronomy). Delhi’s is one of the largest and best-preserved, containing more than a dozen instruments.

सम्राट यंत्र Samrāt Yantra (Sundial) شہنشاہ آلات
The giant 70-foot-tall sundial in the background is the Samrāt Yantra (Supreme, or Emperor, Instrument). On both sides are quadrants with gradations indicating hours, minutes, and seconds. Sundials existed at the time of its construction, but the Samrāt Yantra turned the basic sundial into a precision tool for tracking the movements of heavenly bodies. 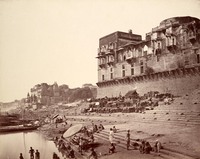 दशाश्वमेध घाट Dashāshwamedh Ghāt (Ten Horse Sacrifice Ghat)
The holiest of Indian cities, Benares (also known as Vārānasī) is famous for its nearly 100 ghāts, massive stone steps leading to the sacred river Ganges, a dip in whose purifying waters washes away sin. Today, tens of thousands of pilgrims daily swarm over this, the largest and most popular ghāt, named after an ancient Vedic ritual. A small portion of a centuries-old observatory (Jantar Mantar) can be seen peeking above the parapet of the palace at right. 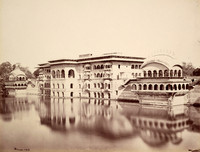 जल महल Jal Mahal (Water Palace) جل محل
The Jal Mahal was built to ward off summer heat and dust in the desert town of Deeg in Rajasthan. Although constructed by Hindu rulers who fought many successful battles against the Mughals, it is heavily influenced by Mughal architectural design. (A larger Jal Mahal, located in Udaipur, appears in the James Bond film Octopussy). 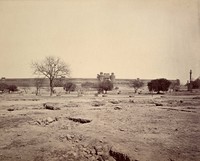 लाल क़िला Red Fort (Lāl Qila`ah) لال قلعہ
Panorama of the red sandstone fort constructed 1639-48 on orders of the fifth Mughal Emperor, Shāh Jahān, when he moved the capital from Agra to the newly constructed city named after himself, Shāhjahānābād (known as Old Delhi today).

Designed by Ustad Ahmad Lahauri, the same architect credited with the Tāj Mahal, it was the ceremonial and political center of the Mughal state for over 200 years. The nineteenth and last Mughal Emperor, Bahādur Shāh II (known as “Zafar”), was deposed and tried here for his support of the 1857 rebellion, bringing to an end one of the most glorious dynasties the world has ever seen.

More a symbolic figurehead than practical commander of the Uprising, Zafar was accused of aiding and abetting the mutinies of the troops. He was exiled and eventually buried in Burma (now Myanmar).

The only known photograph of Zafar was taken by Samuel Bourne. 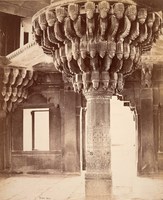 दीवान-ए-खास Dīwān-i-Khās دیوان خاص
Fatehpur Sīkrī is an entire city built under orders from the Mughal Emperor Akbar the Great (1542-1605) which was abandoned shortly after its completion.  Seated on the central platform above this massive red sandstone pillar in the Dīwān-i-Khās (Hall of Private Audience), the Emperor received important visitors and courtiers, attended to matters of state, and listened to philosophical soirées. Ministers and nobles sat in the diagonal galleries. Petitions from ordinary supplicants and the general public were received in a separate building, the Dīwān-i-Ām (Hall of Public Audience).