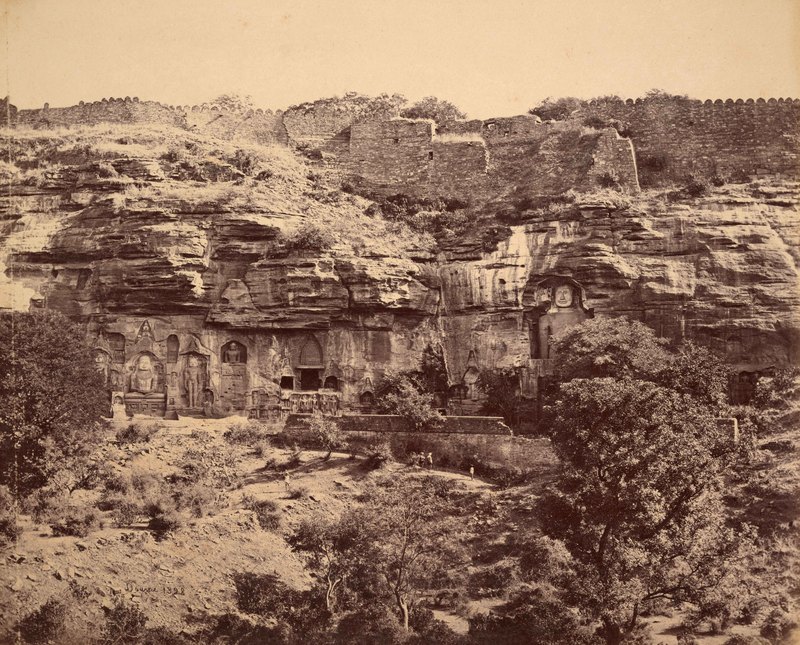 Rock-cut Statues along the Road Leading to Gwalior Fort
Mistakenly thought by Bourne to be Buddhist, these fifteenth-century sculptures are, in fact, spiritual guides of the Jain religion known as Tīrthaṅkaras (ford-makers). They have crossed the river of rebirth, attained liberation, and blazed a crossing, or ford, for others to follow. Ironically, these figures of the most radically nonviolent of all faiths are carved into a mountain upon which countless bloody battles have been waged. Note the crenellations of the most recent citadel on top of the plateau. 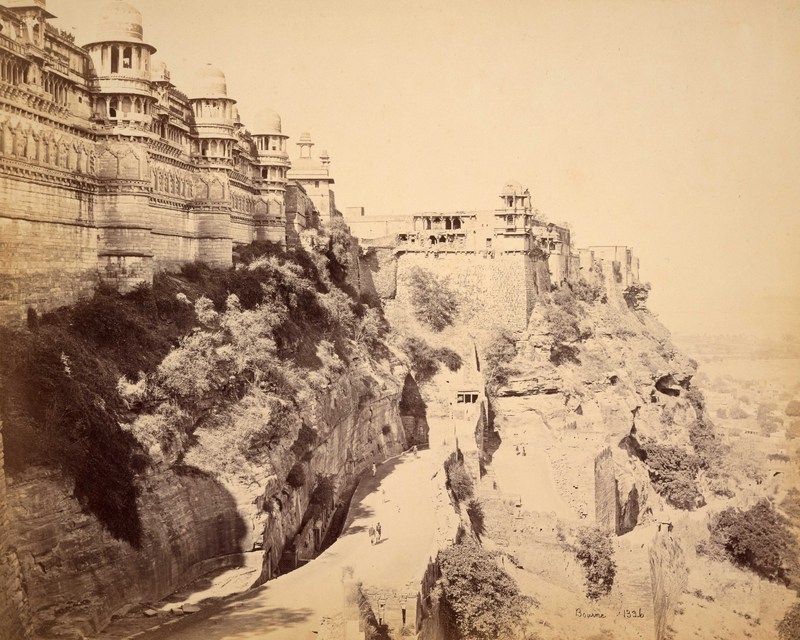 The pearl amongst fortresses in India.  -- Babur, First Mughal Emperor

According to tradition, the first Gwalior fort was built by a Hindu Rājā in the eighth century CE. Cured of leprosy by a holy man named Gwalipa, he built a fort which he named in gratitude after the sage. Beginning in the eleventh century, Muslim dynasties repeatedly attacked the fort. It changed hands numerous times over the next eight centuries in a kind of real-world Game of Thrones, captured and recaptured by successive generations of Mughals, Marāthās, Scindias, and the British East India Company. During the Mutiny/Uprising of 1857, the Scindia Mahārāja of Gwalior remained a loyal British ally (or collaborator, depending on your point of view) and was rewarded with additional land and the return of the fort. To this day, the Scindias remain the unofficial royal family of Gwalior (the Government of India stripped the Princes of all titles and privileges in 1971). In 1897, they founded a private residential school there modeled on Eton, which continues to flourish in the heart of the fort. 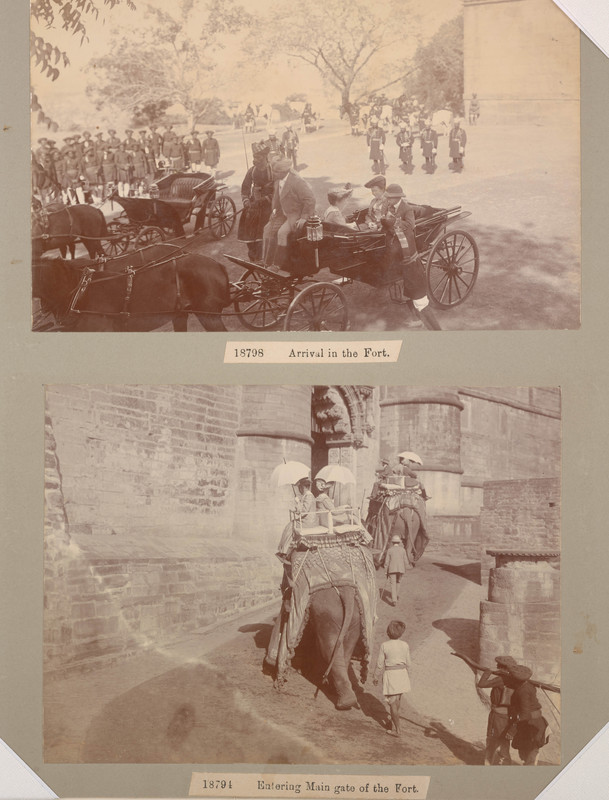 Two photographs on a detached album page of the Duke and Duchess of Connaught on a state visit to Gwalior, arriving in a landau and riding an elephant. 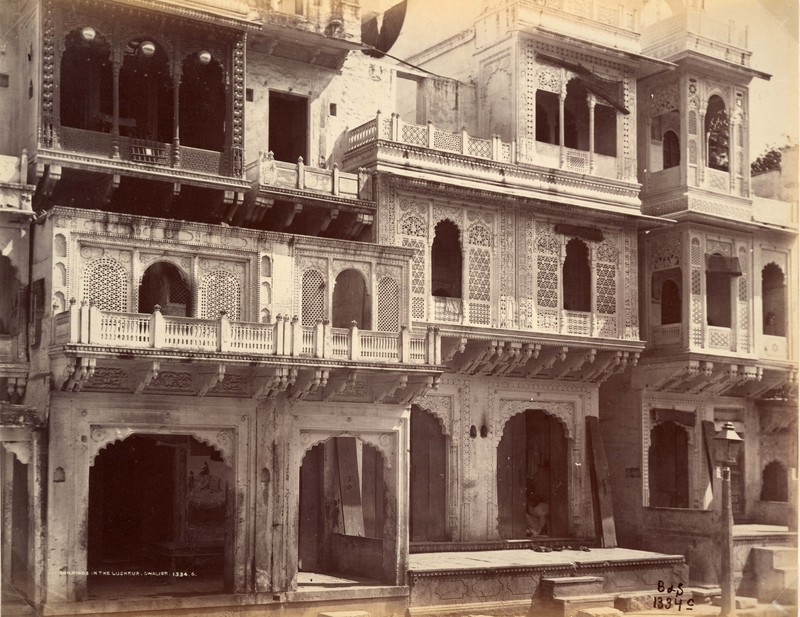 Behind the massive walls of the fort are refined living quarters built of delicately carved stonework equal to that of the Mughals. British colonials were impressed by the elegance of the palace. The Director-General of the Archaeological Survey of India declared it “The noblest specimen of Hindu domestic architecture in Northern India.” 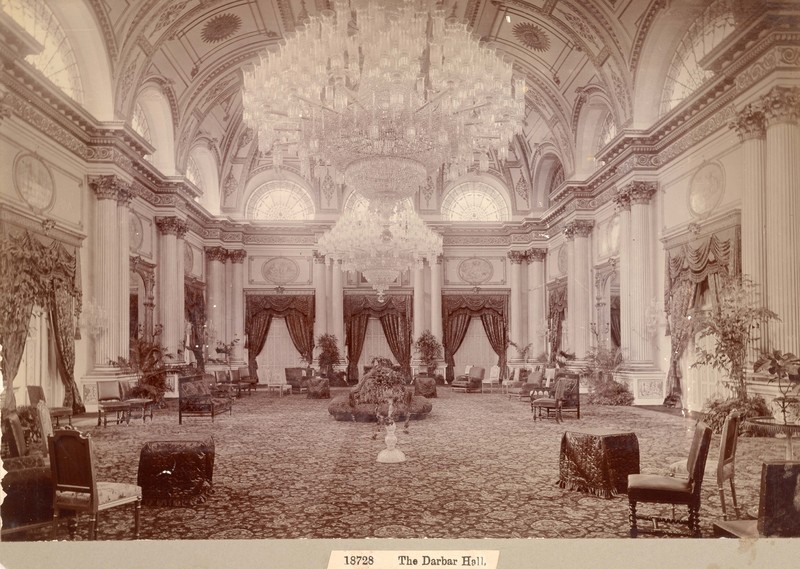 दरबार Durbār (Court or Reception Hall)دربار
The modern equivalent of a Dīwān-i-Khās, this Darbār, or Durbār, hall was built to celebrate a visit by the Prince of Wales in 1876. Before installing the largest chandeliers in the world, the Maharaja demonstrated the strength of the ceiling to a dubious architect by suspending eight elephants from it. The British Agent to the Governor-General of Central India considered it “perhaps the finest and most beautifully-proportioned drawing room in India.” 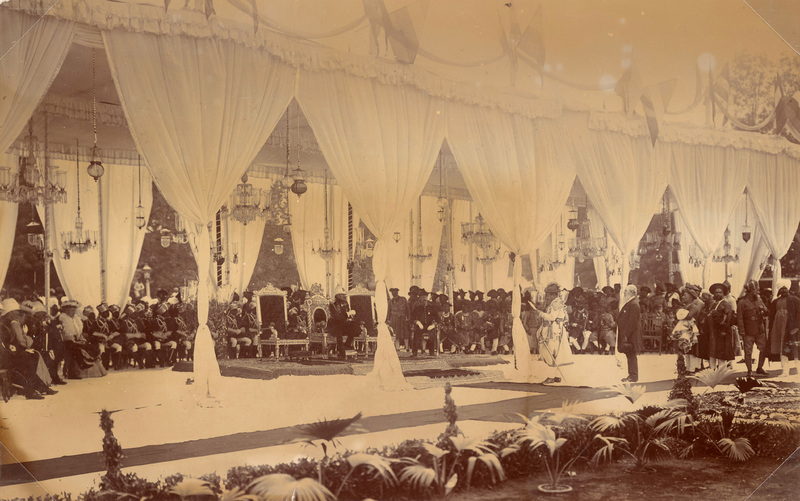 Indian royalty acquired a great deal of prestige by entertaining visiting dignitaries. Famous for their lavish hospitality, the major princely states attracted a parade of British civil and military officials. Here we see an example of Indian pomp and circumstance rivaling that of the British themselves.
Sir Madho Rao (1876-1925) was the fifth Mahārāja of Gwalior of the Scindia dynasty. He was a progressive ruler, founding schools and providing many services to his subjects. Prince Arthur, Duke of Connaught and Strathearn (1850-1942), was a member of the British Royal Family after whom was named Connaught Place (the commercial epicenter of New Delhi), a city which, like Fatehpur Sikri, was built from scratch as a new imperial capital, in this case by and for the British. 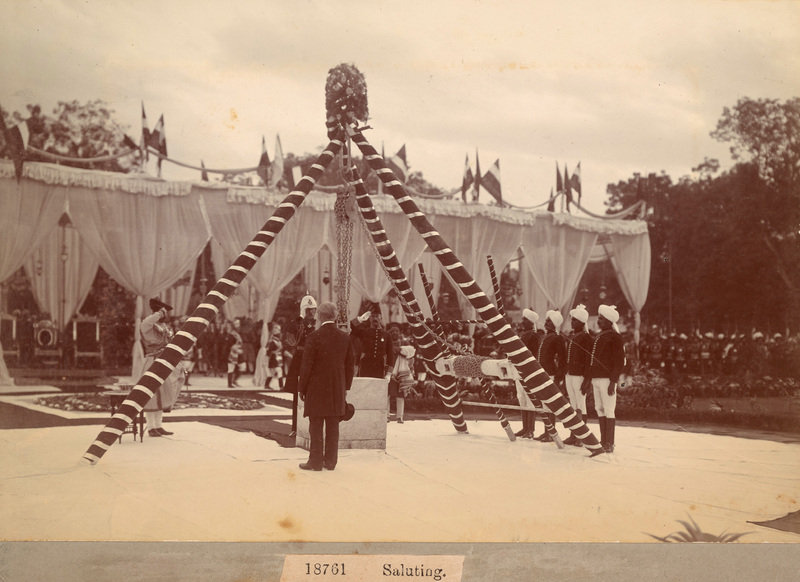 The princely states had a relationship of suzerainty, accepting the paramountcy of the English Crown, and Indian royalty were periodically called upon to demonstrate their loyalty in many largely symbolic ways (such as the salute being given here). The grandest of such occasions were the Delhi Durbars, mass assemblies to celebrate the succession of an Emperor or Empress of India (the King or Queen of the United Kingdom), at which all of the Princes gathered to pledge their fealty. 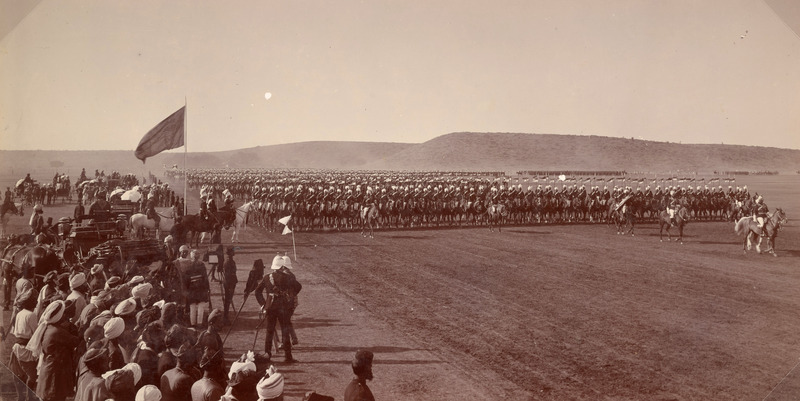 Inspecting the Gwalior Lancers
It was customary during state visits to princely states for British officials to inspect the troops of their loyal vassals. Such occasions also provided Mahārājas with an opportunity to demonstrate their strength to their subjects and neighboring rulers. 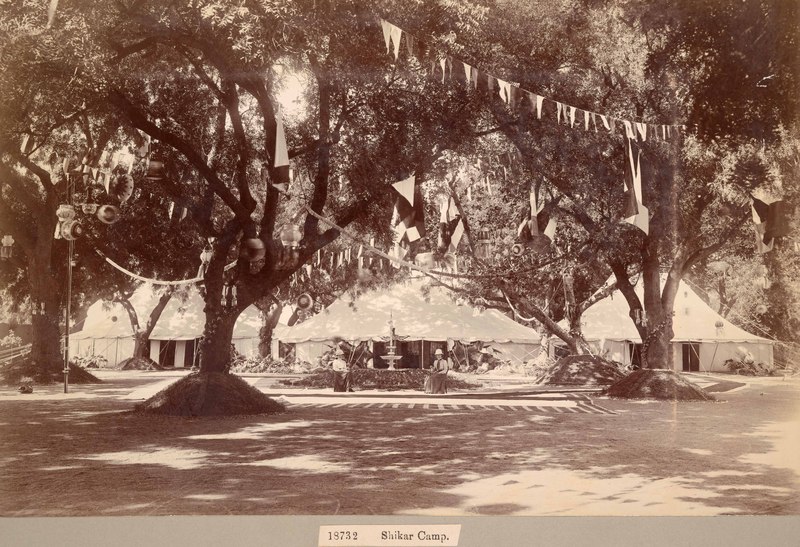 शिखर Shikar (Hunting) شکار
A shared love of hunting (šikār in Urdu and Hindi) brought British and Indian nobility together. The promise of good sport was a major attraction, drawing visitors to princely states from all strata of British society. Extravagantly luxurious camping conditions (as seen here) meant that even ladies would accompany their husbands .