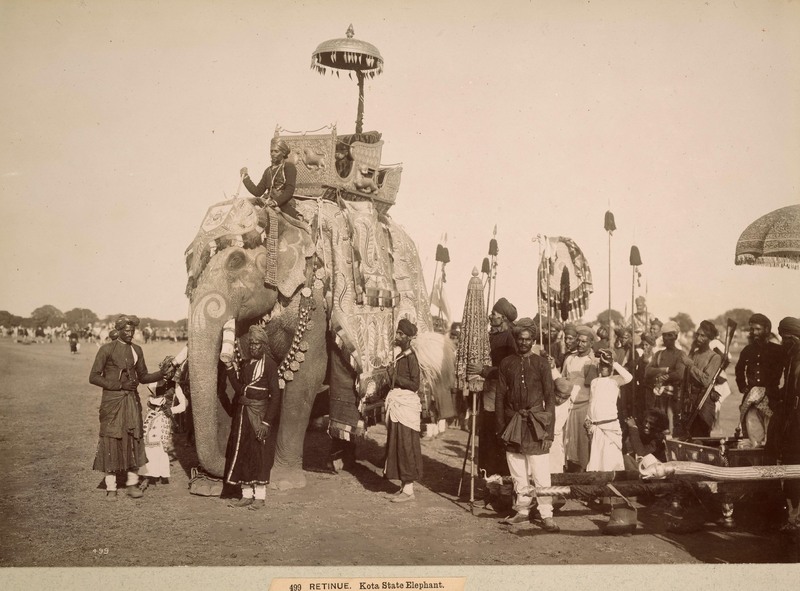 हाथी Hāthī (Elephant) ہاتھی
Elephants were highly valued status symbols used in religious processions, secular state parades, hunting (especially of tigers), and battle. The largest known deployment occurred in 1567-68, when 5,000 armor-clad war elephants were mobilized in Akbar’s siege of the stronghold of Chittorgarh. As an anonymous ancient Indian writer observed, “An army without elephants is as despicable as a forest without a lion, a kingdom without a king, or as valor unaided by weapons.” Note the elaborately painted decorations on the elephant’s forehead. The howdah (seat) atop the elephant, in which the Raja would have sat, is covered in gold. Wealthier Rajas studded theirs with gems.

Portrait of Jats
Jats are an ethnic group from Northwest India who claim the status of Kshatriya (one of the four varnas or social orders, the broad category of caste, in Hindu society). The Jats, like the Sikhs, were designated by the British as "martial races" (suitable for induction into the colonial army). They had taken up arms against the Mughal Empire during the late seventeenth and early eighteenth century. "Sirdars" were traditionally defenders of royalty. 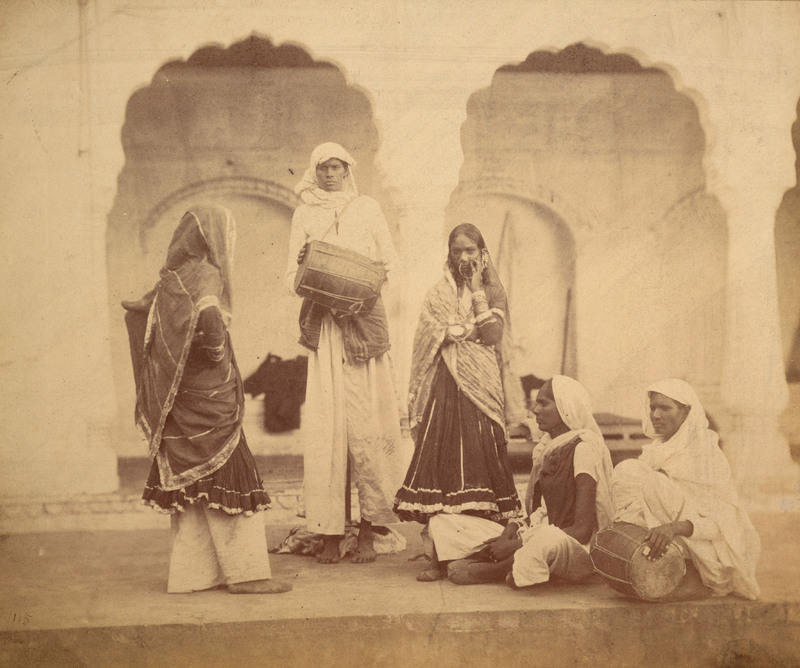 हिजड़ा  Hijrā ہِجڑا‎
‎Hijrās (traditionally translated as “eunuchs” in Indian-English) are members of a transgender community of strolling entertainers who earn their living by singing and dancing at weddings and the birth of a child. Their predecessors were valued members of the Mughal court, where they often held positions of power and trust. In recent centuries they have fallen on hard times as a result of discrimination, and many have been forced into begging or prostitution.

In 1871, the British Raj classified Hijrās as a “Criminal Tribe.” In 2008, a Times of India article on the decline in Hijrās’ status was headlined “Eunuchs want Mughal era role back.” In 2014, the Supreme Court of India recognized the existence of a “Third Gender,” and legally required government forms to allow a choice of male, female, or “other.” 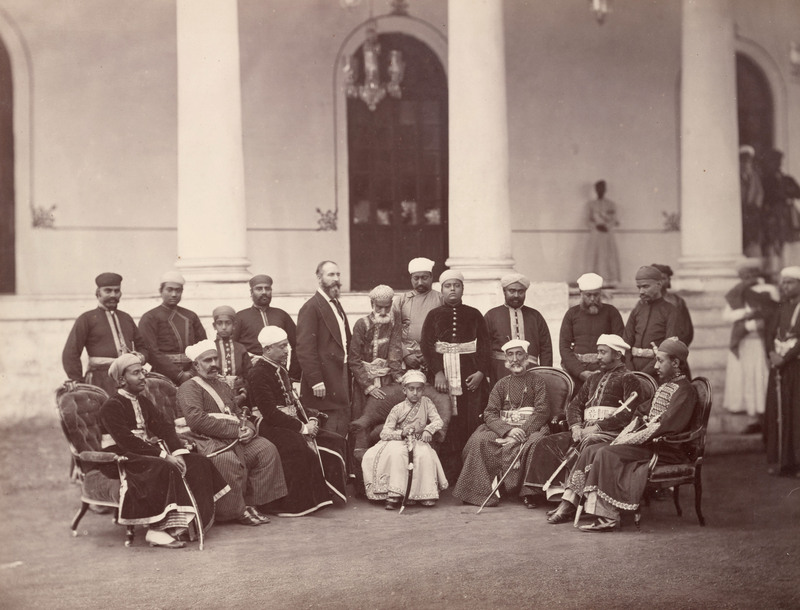 [Chamba; Group Portrait with Samuel Bourne and the Raja of Chamba and his Retainers]

It is believed that the bearded man standing to the left of the young Raj is Samuel Bourne. 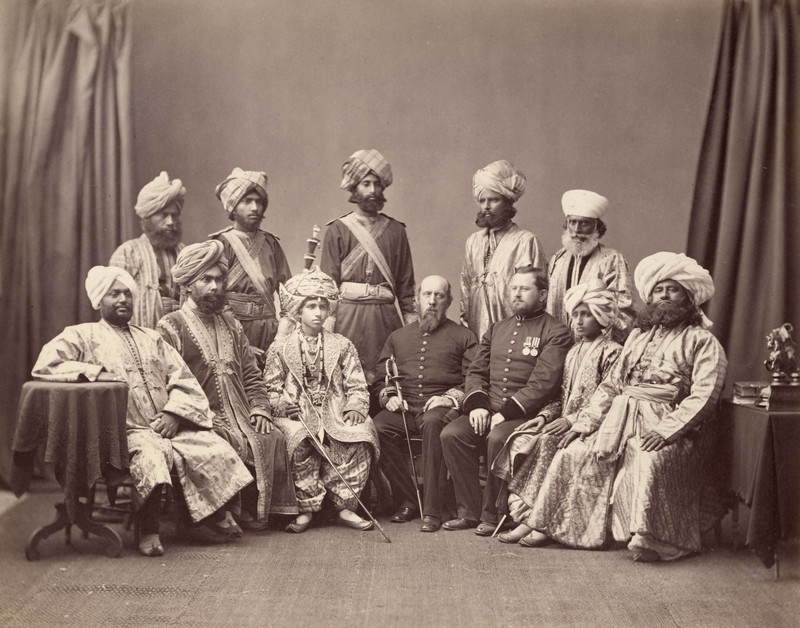 Unidentified Young Rājā and British Officers
Upon the death of a Rājā, the heir assumed the gaddī (throne), regardless of his age. Traditionally, childless Rājās adopted a boy who was groomed for succession and who inherited all attendant rights, duties, and privileges. The Raj, however, passed a law, the Doctrine of Lapse, which stipulated that in the absence of a natural-born male heir a Rājā’s land and property would pass to the British. Unsurprisingly, this transparent scheme to annex Indian territory caused considerable ill-will and likely contributed to the Uprising of 1857. 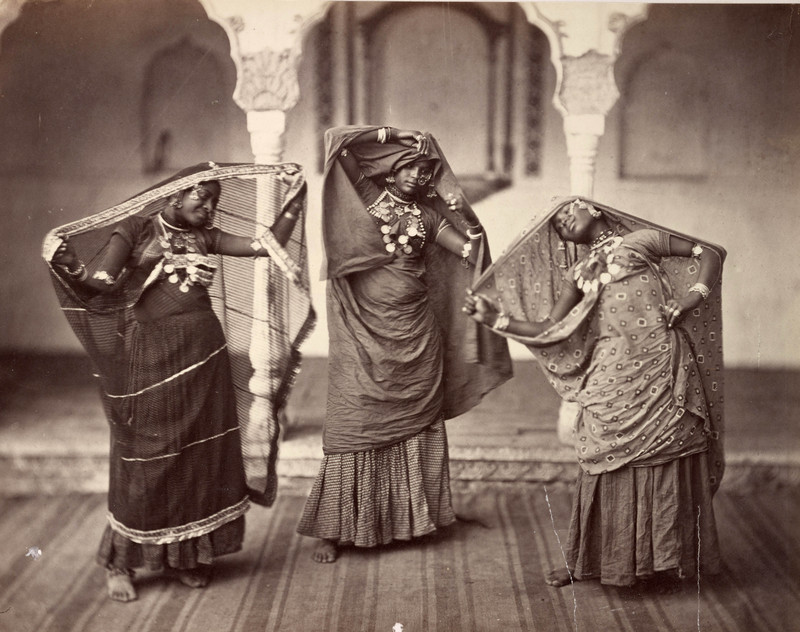 नाच Nautch (Dance) ناچ)
The nāch (Anglicized as “Nautch”) was a traditional folk dance with musicians. As was customary, the audience surrounding the performers was entirely male. (But note women watching from above, behind screens). The term “Nautch girls” was sometimes employed as a euphemism for sex workers. Their rustic dancing style is distinct from classical dance forms, such as Bharatanātyam and Kuchipudī, which are derived from sacred temple dances.