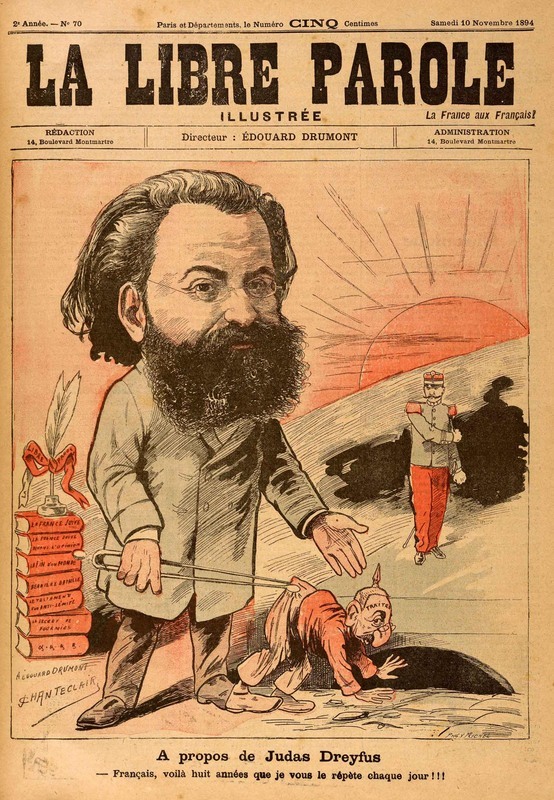 Chanteclair’s caricature, the original of which appeared in Edmond Drumot’s virulently anti-Dreyfusard weekly La Libre Parole illustrée, was published shortly after Dreyfus’s original arrest for treason in October 1894. Since the publication of La France Juive in 1886, Drumont had kept up a barrage of anti-Semitic polemic, as the stack of volumes at his side here suggests. In 1889, Drumont founded the Ligue Nationale antisémitique de France and promoted caricaturist Adolphe Willette as a candidate for Montmartre in that year’s elections.

Chanteclair’s illustration represents Drumont as a colossus whose intellectual and physical prowess dwarfs the powerless Dreyfus. Rather than touch the Captain and so contaminate himself, Drumont uses pinchers to push Dreyfus, here a guttersnipe or piece of refuse wearing a German pickelhaube helmet, into the drain. Behind them stands a proud soldier bathed in sunlight: a symbol for the nation’s new dawn. 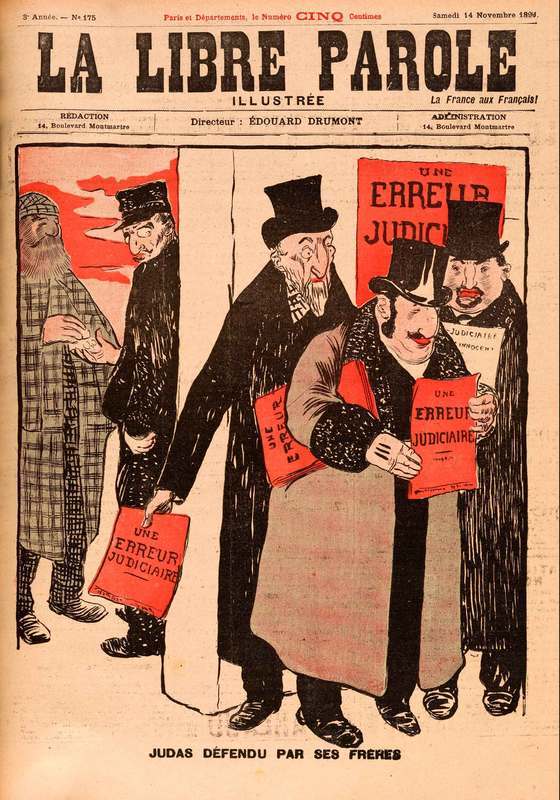 (Judas defended by his brethren)

At the Impressionists’ fourth exhibition in 1879, Edgar Degas displayed his À la bourse which depicted two stockbrokers whispering conspiratorially—an allusion to stock-in-trade representations of Jewish financiers rapaciously feasting on the spoils of capitalist speculation. Degas’s anti-Semitism crystallized during the Affair that transformed friend into foe. Of the Impressionists, Pissarro and Monet supported the Captain’s acquittal; Cézanne, Renoir, and Degas, his condemnation. 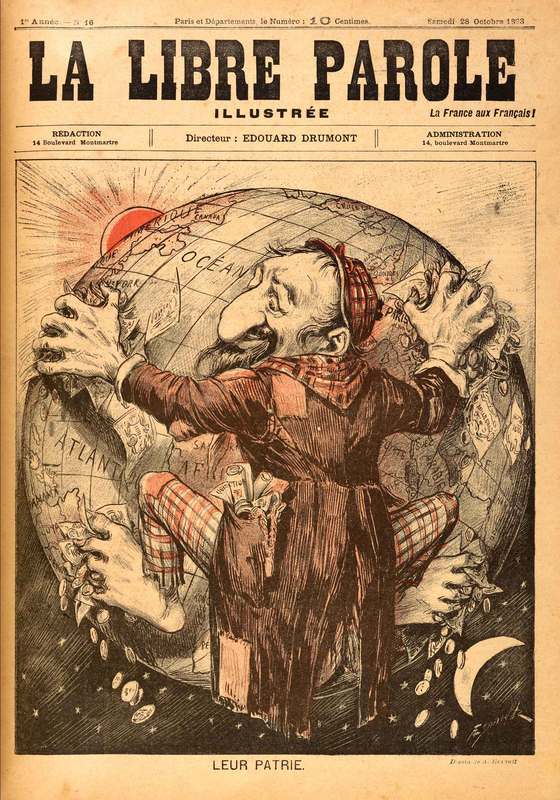 Books like Eduard Drumont’s La France Juive and, of course, his weekly illustrated magazine updated the medieval trope of the “wandering Jew” to reference 19th century concerns about loyalty to one’s racial and cultural “patrie,” over abstract concepts of European and international identity. Reflecting the anti-Semite’s belief that the Jew’s national loyalty extends only so far as his personal finances, in this image the pan-national “embrace” of this caricatured rag-picker is a stifling one. Here the Jew with no country makes his mark world-wide, digging in his “claws” everywhere and anywhere money is to be had.

It is no small irony that at the time Esnault conjured this fiction, such a figure’s real-life analogue would have been the French Republic, which had at that point claimed a stake in almost every continent, draining the resources of over forty protectorates and colonies in Western and Equatorial Africa, Oceania, and South East Asia. 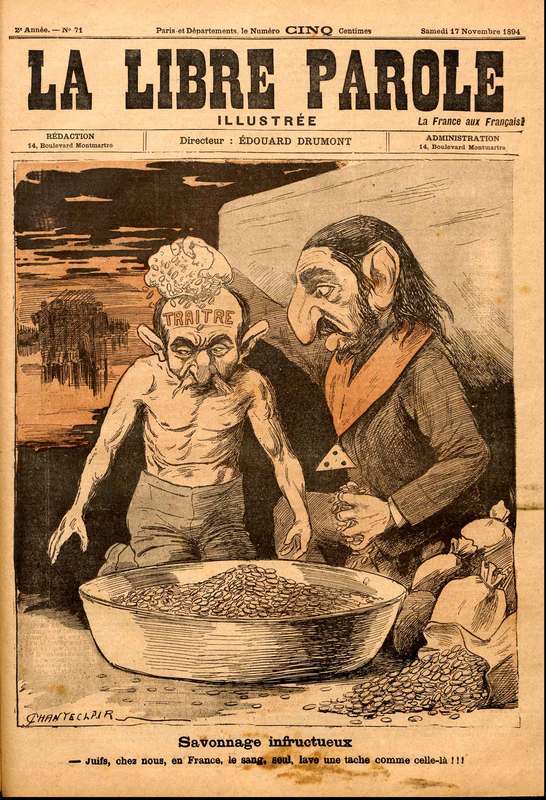 In this image, the “traitor” Dreyfus is beyond recognition, his features distorted by the conventions of anti-Semitic caricature. He receives the monetary ablutions of another stereotyped Jew who bears a large masonic pendant. The paranoid casting of the Jewish people as part of a complex “Masonic” plot was common amongst anti-Semites, and Masonic iconography in an image like this would have signaled a conspiratorial agenda of Jews, Masons, socialists and rootless finance capitalists seeking to destroy France. Chanteclair combines these three types in the figure on our right, who is engaged in a fruitless attempt to launder the guilt of his comrade. “Only blood can clean a stain like this,” the caption warns, as a shadowy group of armed men, readying their guns, forms in the background. Only weeks after Dreyfus had been accused in the pages of La Libre Parole, Chanteclair’s cartoon is intended as a warning for those seeking to expunge the captain of his guilt. 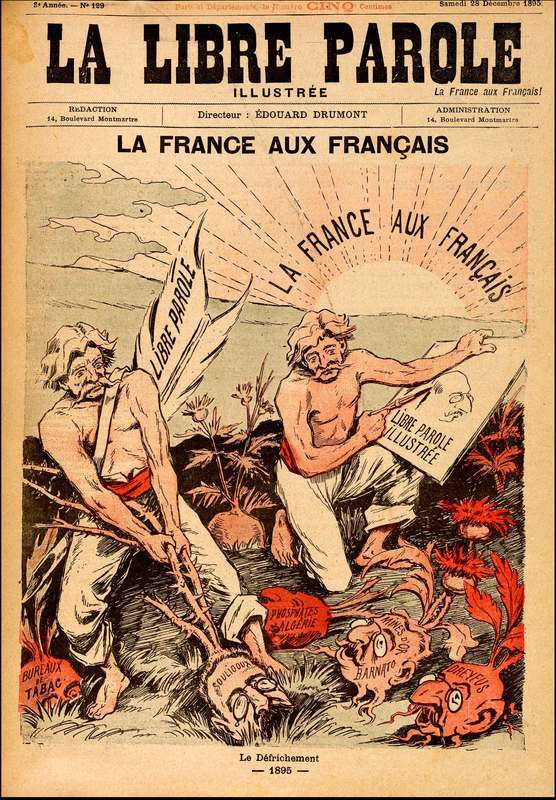 (France for the French)

Though in April 1895 Dreyfus had been sentenced to solitary confinement on Devil’s Island (where he remained until his September 1899 retrial), the Affair continued to incense La Libre Parole’s anti-Semitic staff. This cover represents Drumont’s daily paper, La Libre Parole, and its weekly supplement, La Libre Parole Illustré, as two strapping Gallic farmhands laboring to uproot Jewish evil from French lands.

On the left, the anthropomorphized La Libre Parole digs up scandals, depicted as deep-seeded weeds that threaten to taint the nation’s soil (Jean-Jacques Souligoux was implicated in the Panama scandal; Barney Barnato was involved in a diamond mine collapse). Meanwhile, the figure on the right renders this “valiant” work in his sketch-book. Working en plein-air, this anti-Semitic artist quickly sketches the “Dreyfus image” for which Drumont’s publications were best known. His bespectacled leafy vegetable undoubtedly represents Dreyfus.

← Battle of the Presses
Musée des Horreurs →
The Anti-Semitic Press