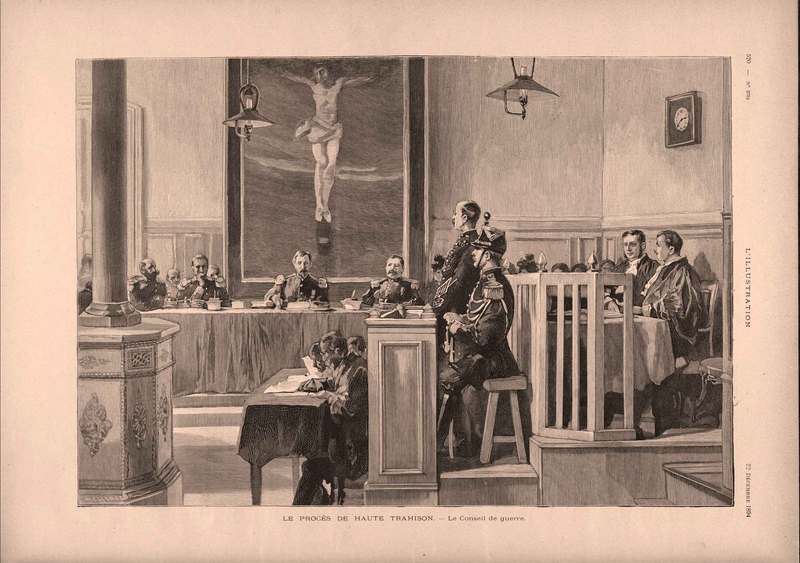 (The High Treason Trial -The Council of War)

On 22 December 1894, a military court-martial convicted Alfred Dreyfus for treason and sentenced him to indefinite deportation. Since October, accusations circulated that Dreyfus had sold military secrets to the Germans, France’s sworn enemies since the disastrous 1870 Franco-Prussian war. Though the reliability of the court’s verdict was challenged, due to its shaky evidence such as penmanship and unpublished secret reports, the military stuck to its story.

The news magazine L’Illustration recorded the solemnity of the courtroom. Dreyfus turns to face a three-person panel seated beneath a painting of Christ crucified—a clear parallel to Dreyfus’s martyrdom by a military determined to preserve its honor. In its crisp lines and careful attention to detail, L’Illustration represented the trial in a calmly factual style without the sensationalism and excitement that characterized most newspaper reports of the Affair. 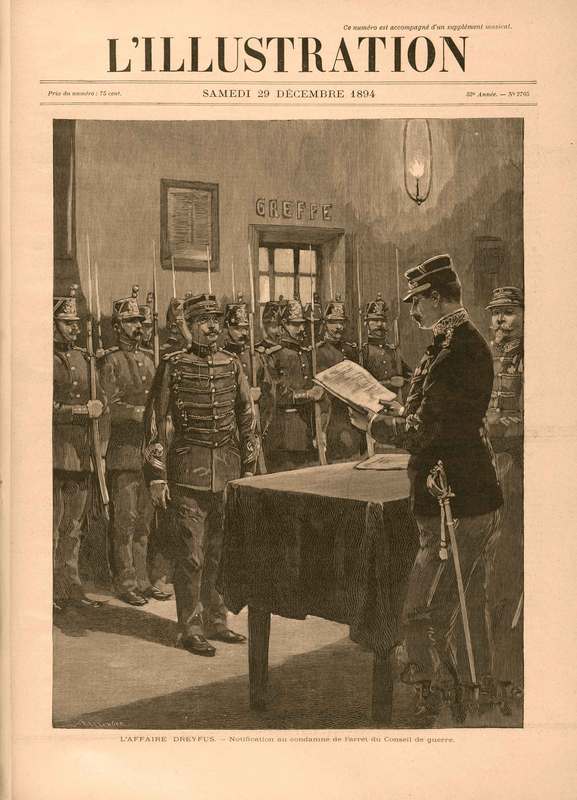 (Notifying the convicted prisoner of the Council of War’s Ruling)

Here, L’Illustration imagines the moment in which Dreyfus was notified of his sentence after his trial had ended. The magazine describes the circumstances of Dreyfus’s notification in great detail later in the issue, explaining that the captain had not been present for the court’s decision. Instead, he was later notified in this salle de greffe, or court registry room, where a letter outlining his condemnation was read aloud to him.

Both this image and the accompanying article in L’Illustration marvel at Dreyfus’s stoic response to this “sad dénouement”: "Captain Dreyfus remained impassive, not a contraction of his face, not a gesture, not a quiver, nothing to indicate the sentiments that would have shaken him during the supreme hour of his terrible punishment, where his honor as a French citizen and soldier remained solemn until the end." 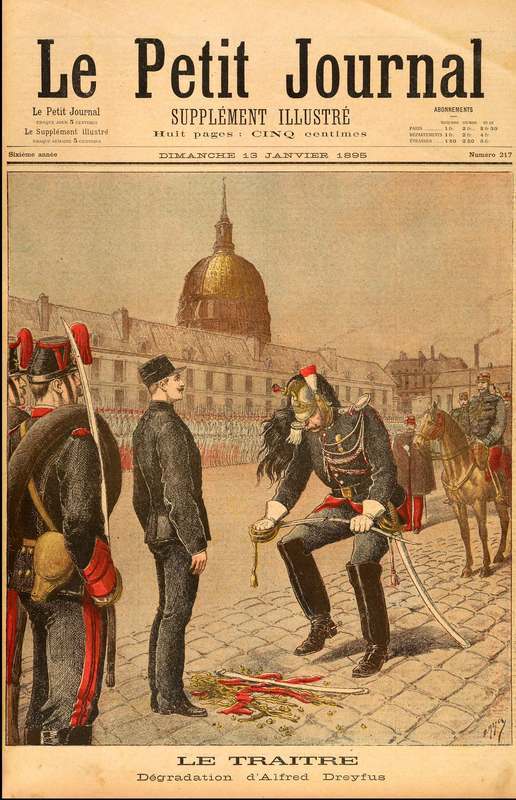 Meyer’s image represents the moment prior to L’Illustration’s “Dégradation du Capitaine,” though Le Petit Journal’s title is more critical. On 5, January, 1895, between his trial and his departure to exile, Dreyfus was stripped of his honors and titles. In this scene, his military accoutrements are removed and destroyed in a public ceremony held in front of the Hôtel des Invalides, pictured in the background. His badges are strewn along the cobblestones, as we witness the moment in which his sword was broken in two. Le Petit Journal’s image attempts to give us a small window into Dreyfus’s emotions. Representing him in profile, we can discern that his eyebrows are knitted in a pained expression. 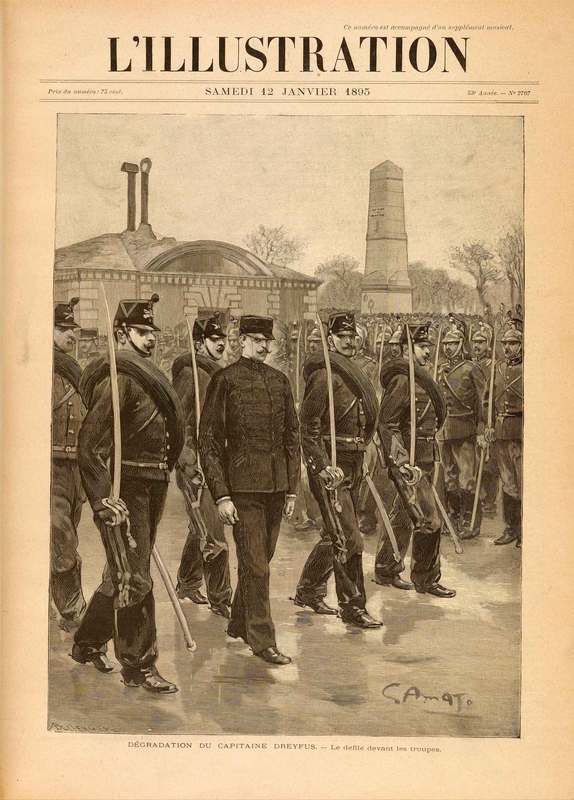 (Degradation of the Captain)

After Dreyfus was stripped of his military honors, the degradation continued. Amato’s illustration captures his humiliating parade around the courtyard of the École Militaire, the the chorus of heckles from fellow soldiers. As Dreyfus recalled it: "I heard the howls of a deluded mob, I felt the thrill which I knew must be running through those people, since they believed that before them was a convicted traitor to France….The round of the square made, the torture would be over, I believed." But the agony of that long day was only beginning.

While Henri Meyer of Le Petit Journal chose to name his picture “Le Traître” and refuses Dreyfus his title, Amato refrains from such judgments and continues to use the rank of Captain in his captions. Do these subtle differences in almost identical scenes betray the political sympathies of each illustrator and their editors? Given how polarizing the Affair had been, it is safe to say that even those tasked with the most apparently objective depictions found themselves choosing sides. 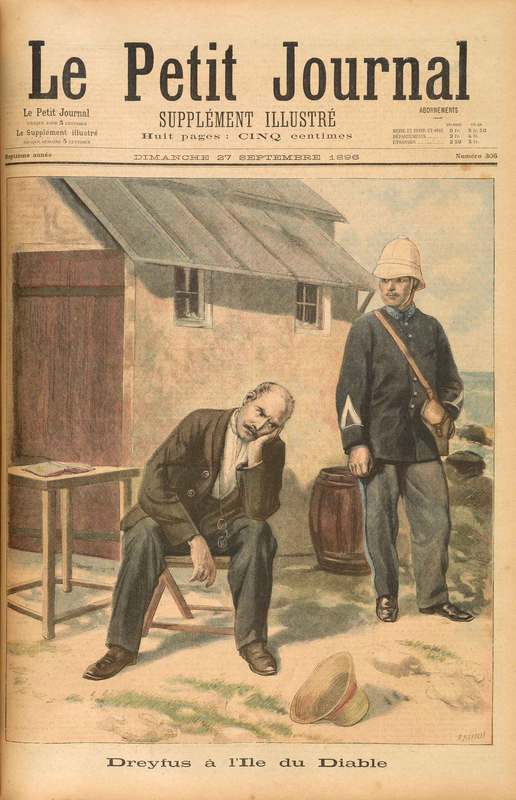 Island was part of a French penal colony devoted primarily to political prisoners off the coast of French Guiana. Dreyfus was exiled there in 1894, and did not leave until 1899, when he returned to France for his retrial.

In this image, Dreyfus turns away from his book in frustration, lost in his thoughts, as a prison guard watches him. Here, Le Petit Journal satisfies the French public’s curiosity to imagine Dreyfus’ condition after his highly publicized trial. A year earlier, they expressed their outrage at the presence of his mustache, claiming that alongside his imprisonment, he should be stripped of such symbols of his nationality: "We were told that the traitor, upon imprisonment, was to have his mustache shaved, hair cut, and be forced to don a prison uniform. None of this has happened; Ah! if he had stolen bread, they would have been as strict as possible; but don’t worry, he has only sold out his homeland."

← Introduction
The End of the Affair →
The Trial Illustrated