Battle of the Presses 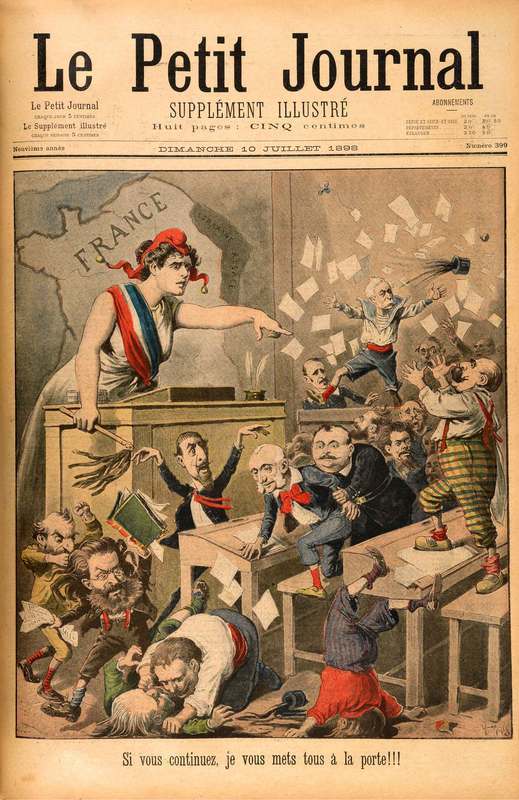 (If you continue, I’m throwing you all out)

This satire depicts the allegorical embodiment of France as a school teacher, whip in hand, admonishing her unruly class. Her mischievous students, who launch their inkpots and paper up in the air, threaten to clobber each other with books, and throw each other to the ground, represent those involved in the heated polemics that followed Dreyfus’ 1894 sentence. In the foreground, for example, Edouard Drumont throws himself into the fray, followed by Paul Déroulède, leader of the pro-military Ligue des Patriotes (pictured in the Musée des patriotes).

Though, between 1896 and 1898, Dreyfus was exiled to Devil’s Island, many other trials took place during his absence, including those of Esterhazy, Picquart, and Zola. Le Petit Journal, whose rich imagery rarely lapses into satire, here takes up its caricatural pen to criticize divisions in French public life exacerbated by the Dreyfus Affair. 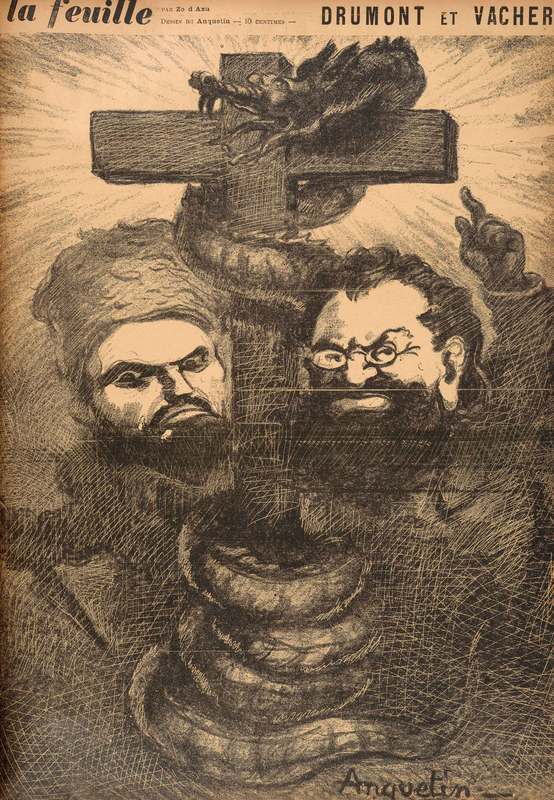 La Feuille was an anarchist newsletter written and edited by the firebrand and political impresario Zo d’Axa (Alphonse Gallaud de la Pérouse), who once launched a campaign to elect a donkey to the Chamber of Deputies. The editorials of this anti-militarist and anti-capitalist publication sought to defend France’s underdogs: the workers, their unions, and Captain Alfred Dreyfus. Here, pro-Dreyfusard illustrator Louis Anquetin fires a shot in the war of the presses, taking aim at anti-Dreyfusard journalist Edmond Drumont by pairing him with Joseph Vacher, a French serial killer and Christian zealot known for his eccentric dress and rabbit-fur cap. Rallying the two around a crucifix entwined with a viper, (short-hand amongst anti-clerics for the religious orders) Anquetin suggests that both hateful men found justification for their rampages in a sometimes complicit Catholic church. 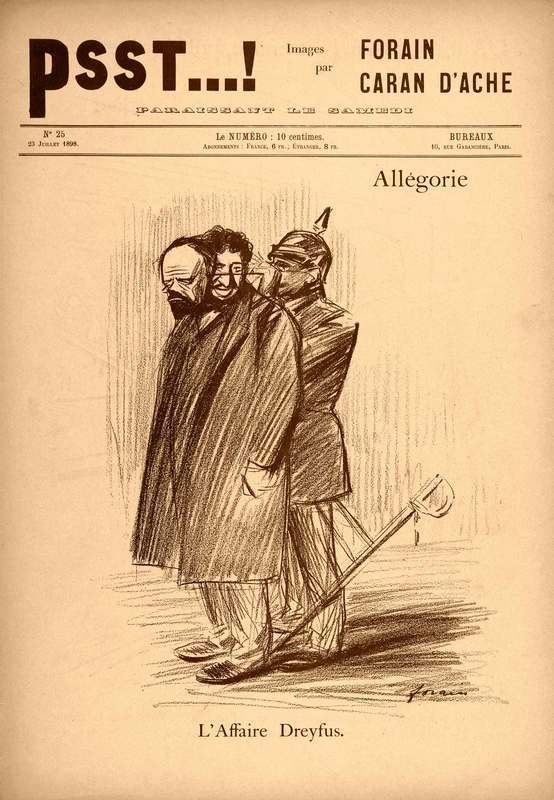 For this Psst…! cover, Jean-Louis Forain depicts a German military officer fastening a mask of Emile Zola, identified through his half-rim glasses and bulbous forehead, onto an anonymous Jew. Zola’s demands for checks and balances on the military should be understood, Forain seemingly suggests, as a cheap masquerade. Behind this flimsy charade, the public would discover an imposter, not a patriot, who concealed actual alliances with the Germans and the Jews. Psst…! issued this cover following Zola’s second conviction for his article “J’Accuse!”, which had been published in Georges Clemenceau’s daily L’Aurore. The homme de lettres fled to England shortly thereafter.
Forain resided in Montmartre where anti-Semitic sentiment flowed as freely as the watered-down alcohol in the district’s celebrated café-concerts. There, he consorted with caricaturists such as Caran d’Ache, who shared his anti-Semitism and his disdain for bourgeois hypocrisies nightly displayed at the cabarets. Both men collaborated on the anti-Dreyfusard weeky Psst…! 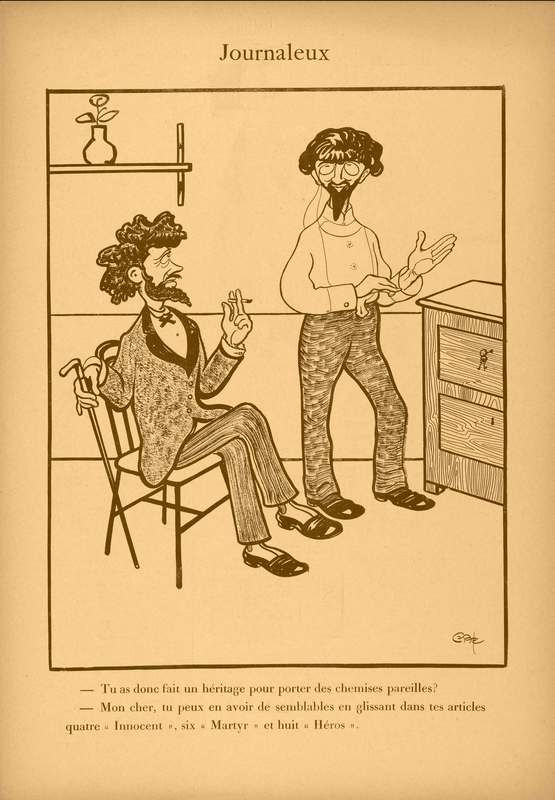 Journalists played a crucial role in forming the public’s opinions, as the immediate response to Émile Zola’s “j’Accuse” demonstrates. However, the chorus of intellectuals defending Zola threatened anti-Dreyfusard writers and journalists whose livelihood depended on slandering the Captain and his supporters. In this sketch by the famous anti-Dreyfusard Caran d’Ache, the bohemian journalist of the Left is depicted as a dandy opportunist, riding the wave of opinion. He confides that his crisp new shirt was bought not with an inheritance, but thanks to his investment in this new cause. You too, he tells his friend, can look this good, and all it takes is peppering your prose with words like “innocent,” “martyr,” and “hero.”