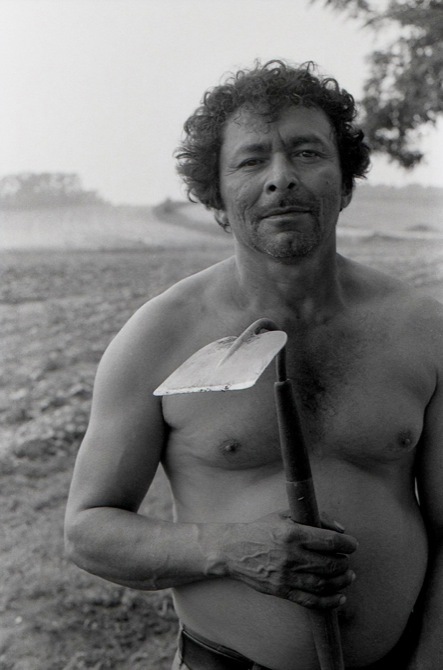 Documenting the Politics of Food

Documenting the Politics of Food is an interdisciplinary effort in celebration and support of the 20-year anniversary of Student Action with Farmworkers. SAF, a Durham-based, non-profit organization strives to strengthen relationships between students, the community and farmworkers to improve agricultural labor conditions and foster social change. Four students from the Spring 2012 Politics of Food class, originating at the Center for Documentary Studies, worked closely with Rubenstein Library staff to curate the exhibit. The curatorial team selected photographs from collections in the Archive of Documentary Arts containing significant material on agriculture and agricultural labor in the United States.

The exhibit highlights the work of ten photographers and the wealth of agricultural material in the Archive’s collections. Photographer John Moses participated in the Migrant Workers Study Project in the summer of 1976. Taught by Bruce Payne and Robert Coles, it was the first class to place Duke students in rural farmworker communities. That experience led to the creation of the Center for Rural Studies and subsequently to the organization of Student Action with Farmworkers. Photographer Jeff Whetstone was also involved in pre-SAF programs, documenting farmworker communities in North Carolina and Texas from 1990-1994. Photographer Chris Johnson, who documented the Mount Olive Pickle Strike, also worked with SAF in the 1990s. All photographers contacted about the exhibit responded enthusiastically.Documenting the Politics of Food reflects the focus of the Spring 2012 Politics of Food class on the agricultural policies of the United States and the effect of those policies on farmworkers, food production, and consumption. Farmworkers are the backbone of our system of production. Though often overlooked, we rely on their labor to produce the food we eat. This exhibit illuminates the unseen manual labor that supports the U.S. agricultural system.

Into the Fields: The Labor of Farmworkers →
Introduction