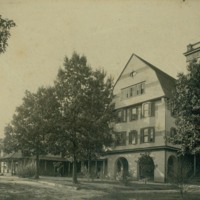 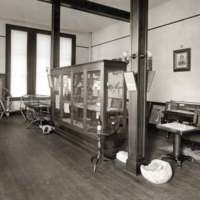 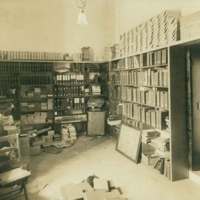 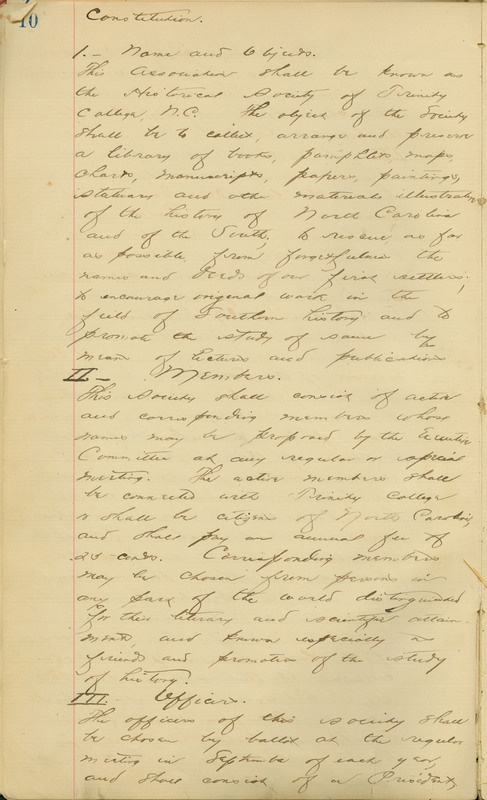 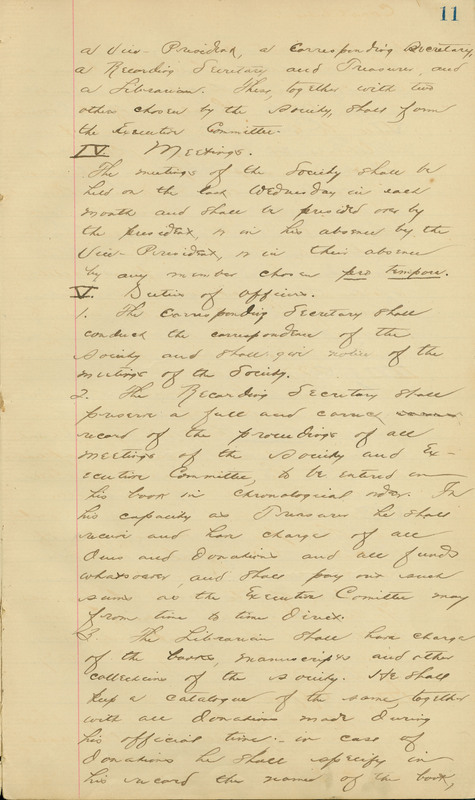 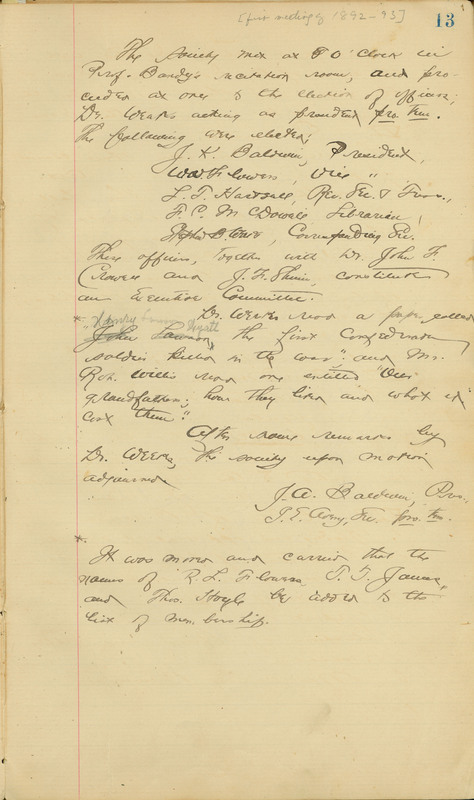 Click on the image and use the right/left arrows to see more pages.

The Trinity College Historical Society traces its roots back to 1892, shortly before the college moved to Durham. Its origins lay in the effort made by history professor Stephen B. Weeks to enhance Trinity’s library by collecting material on Southern history. The Society’s objective was to “collect, arrange, and preserve a library of books, pamphlets, maps, charts, manuscripts, papers, paintings, statuary, and other materials illustrative of the history of North Carolina and of the South, to rescue from forgetfulness the names and deeds of our first settlers, to encourage original work in the field of Southern History and to promote the study of the same by means of lectures and publications.”

After Weeks left Trinity, history professor John Spencer Bassett became the Society’s faculty leader, followed by William K. Boyd. During their tenures, the Society encouraged students to write and present papers on Southern and local history and eventually contemporary European affairs. The best papers were published in a series titled “Historical Papers of the Trinity College Historical Society.” Under Bassett’s leadership, the Society founded a museum in 1894 to collect relics of historical interest.

In 1896, the museum was housed in Epworth (seen above) and when the new library opened in 1904, it was given a display room and a fireproof vault (seen above) to store its treasures. When Boyd took the helm in 1906, the collecting focus of the Society and museum shifted from relics to documents and printed material of historical research value. By 1938, the Society owned more than 500,000 pieces of manuscript material. The Society’s collecting success should not only be attributed to its strong leadership but also to the participation of the student body. Students solicited family and friends for documents and relics and participated in their own historical research. The establishment of the museum marks the beginning of collecting source material for Duke University and in fact was the precursor to the Rare Book, Manuscript, and Special Collections Library and University Archives at Duke.

1894  Under Bassett’s leadership, the Society starts a museum to collect and house relics of historical interest.

1897  The first issue of the Historical Papers of the Trinity College Historical Society is published. The serial features papers written by Trinity students and faculty on Southern and local history and eventually contemporary European affairs.

1904  The museum moves into the newly constructed Trinity College Library, which includes a display room and a fireproof vault for Society’s collections.

1906  History professor William K. Boyd takes over leadership of the Society after Bassett leaves the College. The focus of the museum’s collecting policy shifts from relics to documents and printed material of historical research value.

1938  The Society owns more than 500,000 manuscripts, most documenting southern history.

This exhibit was curated by Kimberly Sims, Amy McDonald, and Meghan Lyon. The curators would like to thank Meg Brown, Beth Doyle, Tim Pyatt, Crystal Reinhardt, and Mark Zupan for their assistance in preparing the exhibit.

The drawing of a merman that appears on the exhibit banner is taken from a five dollar bill issued in North Carolina during the Revolutionary War. This bill, along with other examples of Revolutionary War-era currency, was originally donated to the Trinity College Historical Society, and now forms part of the Rare Book, Manuscript, and Special Collections Library’s Currency Collection.

← Introduction
Leaders of TCHS →
About TCHS