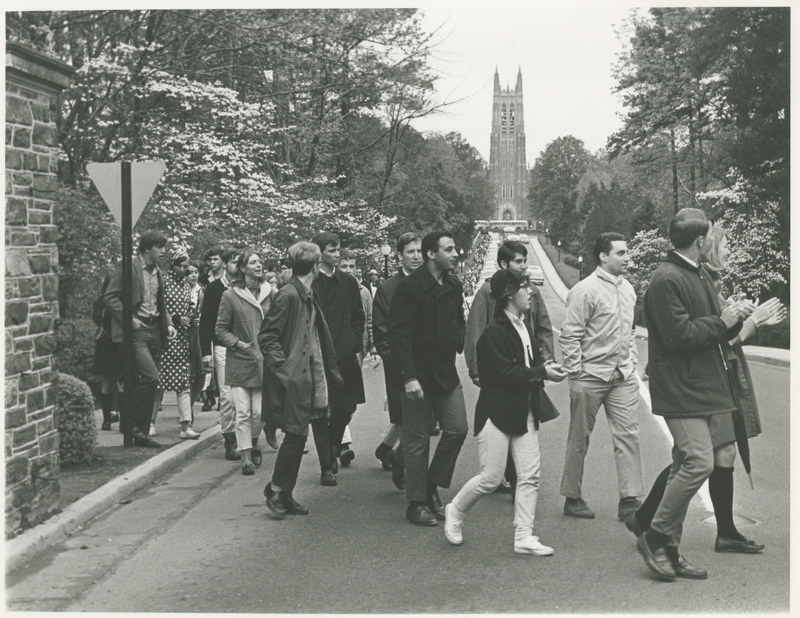 As one of the most iconic buildings on campus, Duke Chapel often functions as the backdrop for students, faculty, and staff who seek to raise their voices in solidarity or protest. After Martin Luther King, Jr.’s assassination in 1968, students, faculty, and staff held a vigil outside of the Chapel for days. Later that year, when police broke up campus protests, students sought shelter in the Chapel. Students even met with President Terry Stanford in the Chapel in 1970 to discuss their concerns. 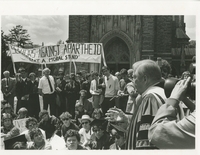 Graduating students protest apartheid during the baccalaureate service, 1985. The demonstration was meant to voice students’ support of Duke’s divestment of all its holdings in South Africa
Photograph Collection, Duke University Archives

The Duke Vigil was a silent demonstration at Duke University, April 5 - 11, 1968, following the assassination of Dr. Martin Luther King. Up to 1,400 students slept on the Chapel Quad, food services and housekeeping employees went on strike, and most students boycotted the dining halls in support of the employees.
Photograph Collection, Duke University Archives

Throughout these decades, Duke Chapel’s lawn continued to be a popular site for demonstrations. It was the place where students set up anti-apartheid shanty towns in the 1980s and Occupy Duke protests in the 2010s. Concerns about race, religion, gender, sexual identity, war, violence, inequality, and even the price of bus fare have found a voice in front of Duke Chapel.