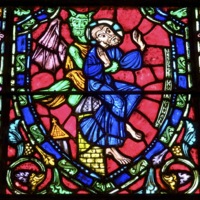 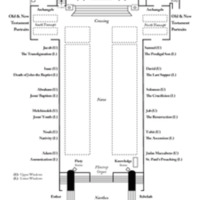 Map of window locations in the Duke Chapel 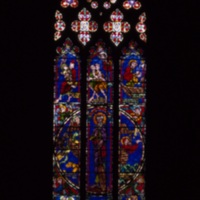 The contractor for Duke Chapel’s windows, G. Owen Bonawit, generally avoided church contracts, yet the $205,000 commission (approximately 9 percent of the building’s cost) encouraged him to overcome his resistance. Bonawit, along with his chief designer, S. Charles Jaekle, are responsible for realizing Duke Chapel’s seventy-seven magnificent windows. Collectively, these windows depict between 800 and 900 individual figures—there has never been an official count—and contain more than a million individual pieces of stained glass.

The upper windows (clerestory) portray the story of the Hebrew Bible and the lower windows tell the story of the Christian New Testament. Together, the windows of the Chapel tell the biblical story beginning with creation in an upper southern window and the apostle John signing the book of Revelation in the lower northern window. What is more, these are the first completed set of windows in the United States to feature the complete story of both testaments.

Although the windows of Duke Chapel had been completed years before the Blue Devils became the university’s official mascot, some claim to see a small blue devil in the Joshua window in the chancel. While the presence of a blue devil in the Chapel is contested, there are several green devils spread throughout the windows. You just have to look closely.