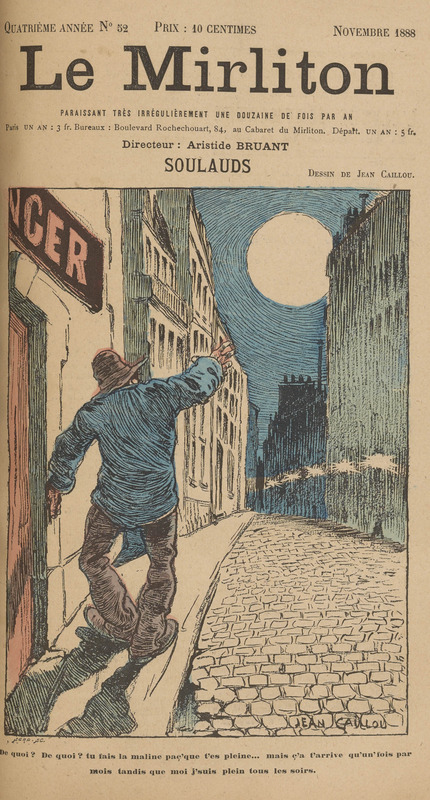 Drunk man on street of Montmartre

Portrait of a Neighborhood

Just outside the medieval walls that once surrounded Paris, on a steep hillside, the neighborhood of Montmartre overlooks the City of Light. Today, Montmartre has become a must-see tourist destination. Its coffee shops, wine bars, street artists, and winding roads offer a snapshot of an older, romanticized Paris, and its monumental Sacré Cœur Basilica, constructed from the end of the nineteenth century until 1914, still bustles with visitors and pilgrims.

However, for much of its history, Montmartre’s relative remoteness from the capital's center permitted it to remain a safe haven from levies and police control. It also escaped the many changes to Paris's urban landscape, most notably the introduction of broad boulevards which were carved into the heart of the city when Baron Georges Haussmann's civic plans were implemented. As such, Montmartre continued to be one of Paris's cheap, working class neighborhoods, attracting members of its nascent bohemian culture, composed primarily of leftist political reformers, musicians, writers, and visual artists.

Le Chat Noir and Le Mirliton promoted themselves with eponymous serial publications that documented their raucous musical performances, popularized dances showcased in their cabarets, and helped make celebrities and icons out of the composers, singers, dancers, illustrators, and writers that participated in the loose and licentious social milieus that each proprietor and his establishment cultivated.