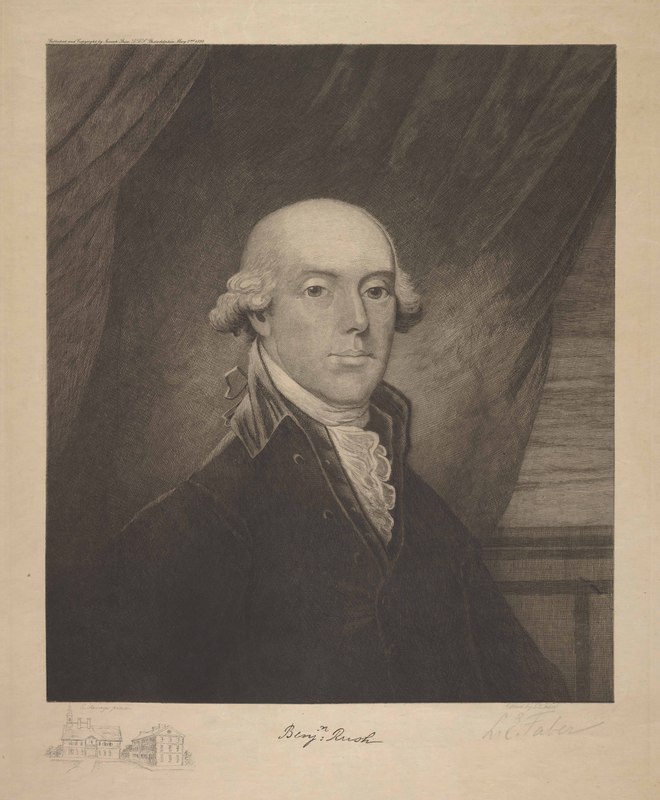 Benjamin Rush (1746-1813) was a prominent Philadelphia physician, signatory of the United States Declaration of Independence, Fellow of the College of Physicians, and Treasurer of the United States Mint from 1799 to 1813. One of the leading social reformers of his day, Rush was a strong advocate for the education of women and an outspoken opponent of capital punishment. He was also active in the antislavery movement and served a term as President of the Pennsylvania Society for Promoting the Abolition of Slavery. Rush was also a leading physician and medical educator who became known as the “Father of American Psychiatry.” He corresponded and was personal friends with a great number of influential people in early America, including Thomas Paine, Patrick Henry, James Madison, John Adams, and Thomas Jefferson – indeed, he played a central role in the reconciliation of Adams and Jefferson prior to their deaths. However, Rush is also a controversial figure in medical history, particularly for his reliance on bleeding as a treatment well after the majority of the medical profession had claimed that it was ineffective and harmful. This exhibit focuses on his work with yellow fever.