For much of American history, individuals were excluded from institutions of higher education on the basis of race, gender, religion, and social class, but as a result of economic and social changes in the 20th century, colleges and universities began opening their doors to previously excluded individuals. But many individuals from underprivileged backgrounds were still unable to attend college and began petitioning for access to higher education. Colleges and universities began institution reforms to increase socioeconomic diversity and broaden access for underprivileged students, many of whom were first-generation college students.

In 2001, Princeton became the first university to offer every aid recipient a financial aid package that included no loans.1 Since then, a number of institutions, including Duke, sought to change their financial aid policies to guarantee meeting 100% of every admitted student's demonstrated financial need. This movement towards increasing socioeconomic diversity brought to light the unique struggles of first-generation college students, most of whom come from underprivileged backgrounds.

The 21st century has seen new initiatives to increase access to Duke and increase the socioeconomic diversity of the undergraduate population, as well as the first initiatives created for first-generation students. 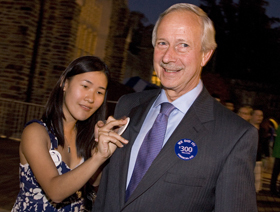 Jennifer Kim places a pin on President Richard Brodhead's lapel prior to his announcement that the initiative had surpassed its $300 million goal.

In December of 2005, President Richard H. Brodhead announced the Financial Aid Initiative for Duke, which aimed to raise $300 million over the next three years. Brodhead called the initiative "crucial to Duke's long-term ability to attract the very best students and to make quality education affordable for all families." The initiative was launched to ensure the university's long-term ability to maintain a "need-blind" admissions policy, while continuing to strengthen its academic and other programs, according to Provost Peter Lange. "This commitment to financial aid has enabled Duke to enroll a much more socially and economically diverse student body, while significantly increasing the intellectual quality of our students."2

In 2009, Duke University began the Socioeconomic Diversity Initiative. The study was undertaken by the Office of the Dean and Vice-Provost of Undergraduate Education and the Office of Financial Aid to understand how students on financial aid, and more broadly students from a wide range of socioeconomic backgrounds, experience Duke, and to unearth financial roadblocks that may not be immediately obvious. The researchers interviewed numerous students on financial aid and inquired about social, academic, and financial experiences that have affected them at Duke, and the results of the study revealed that students on financial aid faced numerous struggles that the University felt a need to address through various policy changes and initiatives, including programs that aimed to increase access and ease the transition to Duke for first-generation college students. The Initiative was approved by the Institutional Review Board and concluded in 2011.4

Duke launched a pre-orientation program for first-generation students in the fall of 2012, which included information sessions on financial aid, campus jobs, buying books, sticking to a budget, time management, and working with faculty members and academic advisers.

The sessions grew out of an informal collaboration between the Academic Resource Center (ARC) and Counseling and Psychological Services (CAPS). Based on input from current and former first-generation students, the offices formed the 1G Network in 2009 to offer advising, peer mentoring, and social opportunities for the approximately 500 firstgeneration undergraduates. Throughout the year, 1G students are invited to community dinners and faculty networking sessions, as well as more informal get-togethers. The preorientation workshops were added in a partnership with several other campus offices.5

“ARC and CAPS are very focused on the 1G network as a community,” says ARC director Donna Hall. “At the same time, there are institutional efforts to make individuals in the 1G population aware of the services available to all Duke students.”6 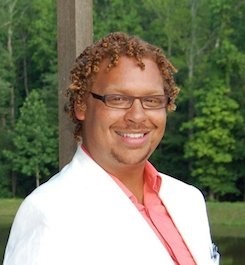 Justin Clapp is the first Director of Outreach and Access at Duke.

The results of the Socioeconomic Diversity Initiative and the 1G Network and Pre-Orientation Program prompted Duke to increase support for first-generation college students, and created a new university-level financial aid position with the title of Director of Outreach and Access to cater to low-income and first-generation applicants.

Justin Clapp, former assistant director of financial aid and a first-generation college student himself, is the first to serve in the new position, providing support for students who are the first in their families to go to college. The director of outreach and access will help coordinate efforts of admissions officers and faculty members who are working to address issues first-generation students face, Clapp said.

The position was born out of University officials’ belief that it is Duke’s responsibility to make students successful once they arrive on campus—regardless of their socioeconomic background, said Steve Nowicki, dean and vice provost of undergraduate education.7

Brittany Amano has started two nonprofit organizations and has volunteered with the YMCA and FEMA.

Neil Rogers, an incoming freshman from Ohio, hopes to double major in Spanish and linguistics at Duke.

In November of 2015, President Brodhead announced that Duke would launch the Washington Duke Scholars program to support first-generation students.

The new program will provide an enhanced financial aid package, a four-week summer orientation program, mentorship, computers and seminars to support selected first-generation students after arriving at the University. Administrators are hopeful that after involving approximately 30 students in the program's first year for the Class of 2020, it will expand to around 60 and eventually include all eligible students, making Duke a more attractive destination for first-generation students, explained Steve Nowicki, dean and vice provost for undergraduate education.

"We need to make sure all of the students we need to bring into Duke are supported in a way that allows them to take full advantage of everything that we have to offer," Nowicki said.

Certain first-generation applicants accepted to Duke needing high or full financial aid will be considered as potential Washington Duke scholars upon admission based on characteristics such as their socioeconomic status, parents' education level, high school and number of advanced placement courses. Around 17% of incoming first-generation freshmen will be awarded a Washington Duke Scholarship.8

Nowicki also noted that a driving force behind the program is to provide resources for students who might need additional support after arriving on campus, explaining that the lack of existing support for low-income, first-generation students after arriving at universities is a national issue.

"We've seen this at Duke, and we've seen it nationwide," Nowicki said. "The story is out there of these high-achieving kids who come to a place and then struggle through no fault of their own."

The University's newest scholarship program will be administered by the newly-created Office of Outreach and Access while still being affiliated with the Office of Undergraduate Scholars and Fellows—which is responsible for Duke's merit scholarship programs, such as the Benjamin N. Duke and Angier B. Duke Scholarships, according to a press release announcing the program.9