A Chronicle article published in 1976 stating that NCCU is "quite different" from Duke in that most of the students at NCCU are the first generation in their families to attend college.

The 1960s and 1970s saw the development and expansion of initiatives that aimed to ease the transition from secondary school to Duke for minority students. These initiatives would lay the foundation for later initiatives specific tailored for first-generation students.

The 1970s is also notable for the increase in students who openly identified as first-generation college students. It is likely that this decade saw the first recorded use of "first-generation student" to refer to first-generation undergraduate status in Duke University history. The establishment of a specific term to refer to students whose parents did not earn a college degree has continued to this day, making it easier to specify and chronicle this unique status.

The 1980s and 1990s was a period of major transition for Duke. As Duke's prominence rose in American higher education, students from beyond the Eastern Seaboard began submitting applications for admission to the Durham school. By the end of the 20th-century, Duke was truly a national university, and with a rise in geographical diversity came a desire to achieve racial and socioeconomic diversity as well. 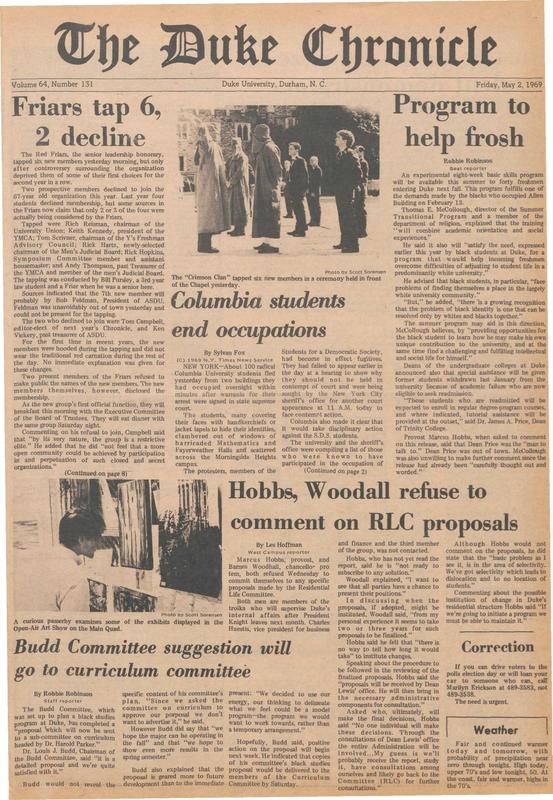 The Chronicle announces the inaugural Summer Transitional Program for the summer of 1969.

On February 13, 1969, Duke University students in the Afro-American Society (now the Black Student Alliance) occupied the Allen Building to bring attention to the needs of black students and issued a list of demands to administration. Included in these demands was a program that would help incoming freshmen overcome the difficulties of adjusting to student life in a predominantly white university.

The Summer Transitional Program was created to fulfill this demand and began in the summer of 1969. The goals of program were to strengthen the academic skills of its participants and ease the social transition to Duke, but it was not conceived as a remedial program; rather, a transitional one. According to Thomas E. McCollough, who served as the first Director of the Summer Transitional Program, the program's goal was to "introduce the participants to Duke as it would be experienced in the fall, while at the same time strengthen their self-confidence, encouraging them to exercise their special talents and skills, and challenging them to build social relationships that would be meaningful to them beyond the summer."1

According to McCollough, the committee established to oversee the creation of the program found it difficult to specify precise criteria for the selection of program participants. It was ultimately decided that both black and white students should participate, and that the basic criterion for selection would be "cultural disadvantage," a term which carried the assumption that some students' test scores or class standings did not adequately reflect their potential for competent academic performance.2 First-generation status was never mentioned as an official selection criteria but was likely an infuencing factor when selecting participants. 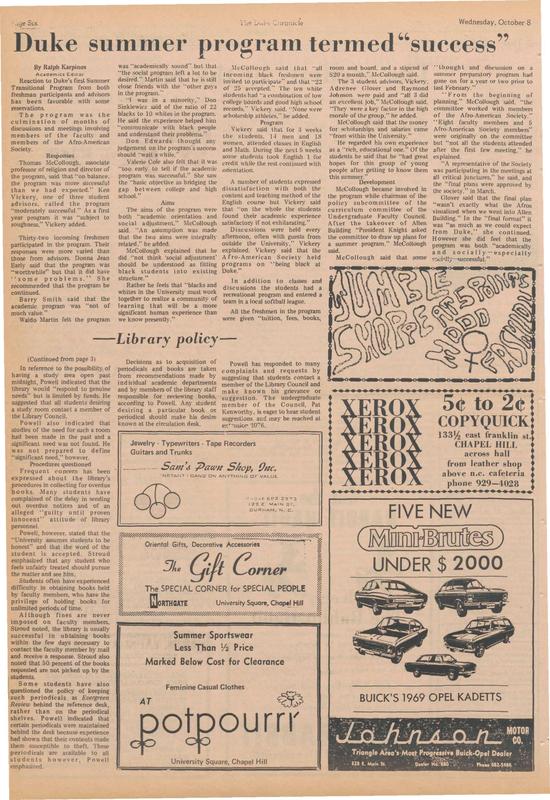 The inaugural Summer Transitional Program is termed a success.

The inaugural Summer Transitional Program was deemed a success by the University, with strong consensus that the program should continue, albeit with modifications. There was agreement that the program gave its participants a realistic understanding of social life and academic expectations at Duke, a shared sense of identity, and group solidarity. Harold Wallace, Dean of Black Student Affairs, concluded after the 1971 Program had completed that the Summer Transitional Program was successful in reducing the attrition rate of black students, raising their level of academic performance, and providing a supportive system, all of which contributed to the success of its participants as enrolled students.3

The Summer Transitional Program gave early evidence that providing financial, academic, and social support to disadvantaged students would greatly increase their likelihood of success, and laid the foundation for future orientation programs at Duke, including the first specifically for first-generation students in 2012. 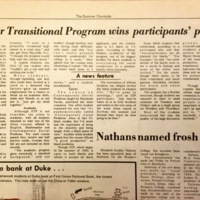 The Chronicle reports the 1971 Program was praised by its participants.

The 1977 Summer Transitional Program poses on the steps of the Chapel. 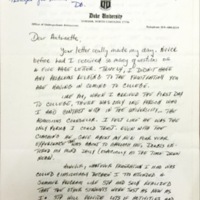 A letter from beloved University recruiter David Belton to an incoming freshman. 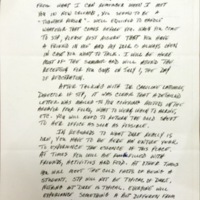 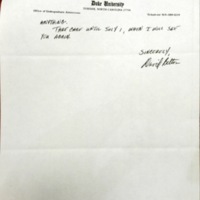 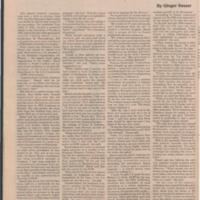 Smeal interviewed with the Chroncile in 1979. 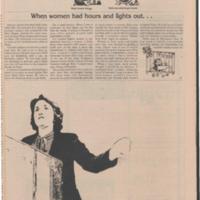 Later that year, she was included in Time's 50 Faces for America’s Future.4

Several prominent Duke alumni were the first in their families to earn a bachelor's degree, including Eleanor Smeal. The daughter of two Italian immigrants, Smeal told the Chronicle the following in a 1979 interview: "My mother was determined that I was going to get a good education, and for a first-generation Italian daughter that's not easy. She always told me that I was just as good, capable and intelligent as my brothers, and that I should stand up for what I believed in. She never knew it, but she was a militant feminist!"

While an undergraduate at Duke, Smeal was actively involved in the fight for racial integration at Duke. She was a member of Women's Student Government and served as the President of Addoms dormity and the Chair of the Women's Association of House Presidents. She graduated Phi Beta Kappa from Duke in 1961 with a B.A. in Political Science and went on to become a major leader of the modern American feminist movement. 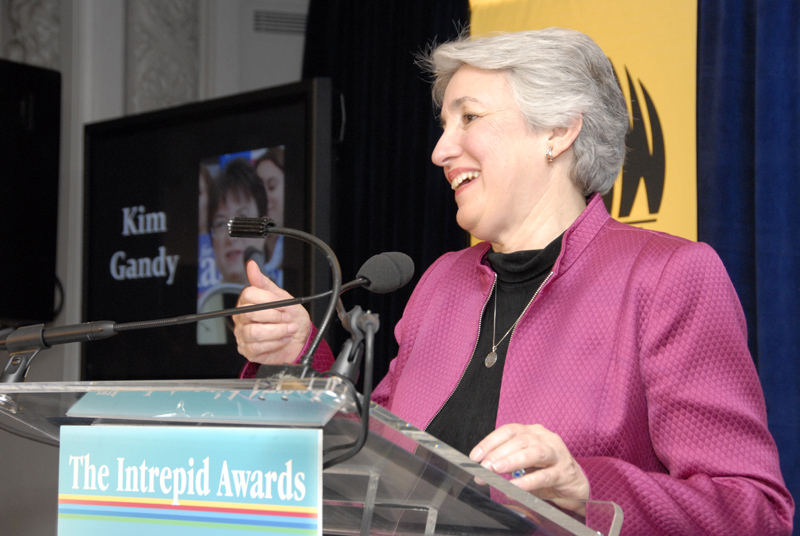 Today, Smeal is the President of the Feminist Majority Foundation and its sister political-advocacy organization the Feminist Majority, as well as the Publisher of Ms. magazine. For over three decades, she has played a leading role in both national and state campaigns to win women’s rights legislation and in a number of landmark state and federal court cases for women’s rights. Smeal was formerly a three-term President of the National Organization for Women and is currently co-chair of NOW's Advisory Board.5

Smeal was inducted into the National Women's Hall of Fame in 2015.6

Stewart was "considered the most prominent alumnus in [North Carolina] politics."

Carl J. Stewart, Jr. is a North Carolina politician who served as Speaker of the North Carolina House of Representatives for two terms between 1977 and 1980. He broke tradition by seeking a second term as Speaker, and since then, it has been customary for speakers to serve multiple terms.

Sue Wasiolek, better known by students as Dean Sue, is the Associate Vice President for Student Affairs and Dean of Students at Duke University. The daughter of two Polish immigrants, Sue committed herself to attaining a bachelor's degree at a young age and was admitted to Duke University in 1973. Sue earned a B.A. in Science Education in three years and served as an RA while in graduate school. It was during her time as an RA that she realized her passion for helping students through their educational careers. For the past 36 years, Wasiolek has worked in the Division of Student Affairs at Duke University and has inspired countless students to pursue their ambitions and make the most of their experiences at Duke and beyond.

Gene Banks discusses his love for Duke as a first-generation college student.

Gene Banks was a star forward on the Duke Men's Basketball team who won the ACC Rookie of the Year in 1978 and MVP three times. Banks is perhaps most remembered at Duke for leading the Blue Devils to a home game victory over the Tar Heels in 1981, ushering in a new era in Blue Devils basketball under the coaching of Mike Krzyzewski. Banks was an NCAA two-time NCAA All-American during his tenure at Duke and was inducted into the Duke Sports Hall of Fame in 1994. He went on to play six seasons in the NBA with the San Antonio Spurs and the Chicago Bulls, averaging 11.3 points per game spanning over 468 games in his professional NBA career.