"The Explosion at Duke" rocked the region as results from the Takeover were plastered across the front pages of many local and regional newspapers on Friday, February 14, 1969. However, news of the Takeover at Duke was overshadowed in national publications by the student protest at the University of Wisconsin-Madison. Duke students, faculty, and others used newspapers as a platform to voice their opinions on the takeover. In the immediate aftermath, two Duke professors also created a questionnaire to gauge the community's sentiments.

In the weeks following the Takeover, the University subjected the students to a judiciary process for allegedly violating its "Pickets and Protests" policy. Two local Durham lawyers were hired to act as the prosecution for the trial while the students were defended by two members of the NAACP Legal Defense Fund and by the father of one of the defendants. Rather than expel them, the Hearing Committee ultimately put 47 black students on probation for one year for their participation in the Allen Building Takeover. 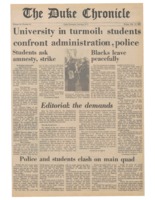 The Duke Chronicle devoted an entire issue to extensive coverage of the Takeover, protest, and community reactions on February 14, 1969.

"The Explosion at Duke" made the front page of the North Carolina Anvil, an alternative weekly newspaper based in Durham. This issue includes an hour by hour account of the Takeover and protest. 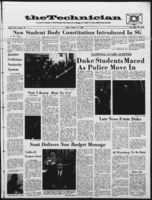 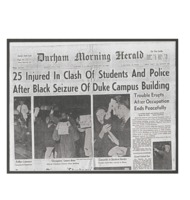 The Durham Morning Herald featured the 25 injuries that occurred during the "free-swinging melee" between students and police in the headline and photographs on its frontpage. 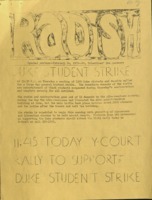 “This shit has hit the fan at Duke,” asserted a local worker in the Southern Student Organizing Committee about the events on February 13 in this special "St. Valentines' Eve Massacre" edition of The Radish.

"The information you give today, may be used against you tomorrow." Professors Kornberg and Back created a questionnaire in order to gauge the attitude of the Duke community in regards to the Takeover. 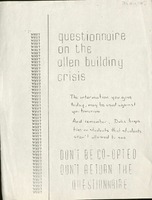 Some Duke students were skeptical about how their responses to the Back-Kornberg questionnaire would be used against them in the future. 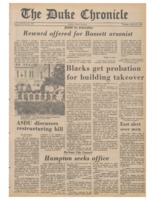 The Duke Chronicle announced that the black students had received probation on March 20, 1969, in an article that covered the results of the March 19 trial.