This exhibit has been made possible through the Franklin Humanities Institute’s Story+ program, along with generous support and funding from Bass Connections, Duke Libraries, and Versatile Humanities at Duke. Story+ is a six-week summer research program that brings together undergraduates, graduate students, and faculty members together to conduct humanities-based projects involving storytelling techniques. This exhibit was curated by a Story+ team of three undergraduates Alan Ko ‘19, Lexi Kadis ‘20, and Zara Porter ‘21; graduate mentor Ellen Song PhD '18; and Rubenstein Library staff members in commemoration of the 50th anniversary of the Allen Building Takeover.

The undergraduate student curators were committed to showcasing the specific day of the Takeover from the perspectives of the students – both black and white. They also provided the historical context behind the Takeover, highlighting campus life in the 1960's as well as the political movements occurring in Durham more broadly. They chose to conclude with an exploration of the Takeover's enduring legacy: 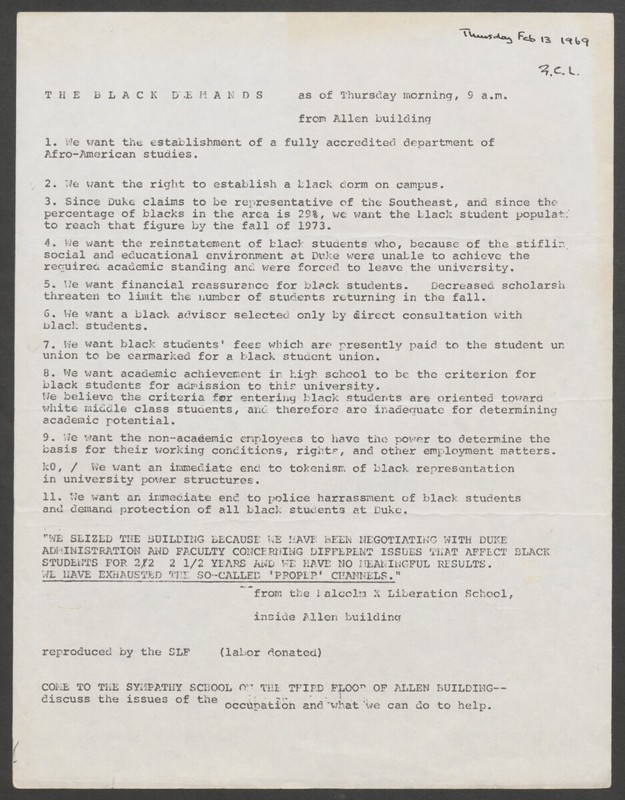 The Afro-American Society's demands on February 13, 1969.

"Although the Takeover is now preserved in the archives, its impact has lasted long beyond the events of February 13, 1969. The radical actions of Duke's black students in the late '60s set the standard for students navigating campus life in the present. Their brave actions helped to inspire future minority students to voice their concerns on a predominantly white college campus. They set a precedent for future student activists to stand up to the administration and to demand a better vision for their University. They ensured that their voices were woven into Duke history. Most importantly, they paved the way for students of all colors and backgrounds to create a space of their own on this campus. Ultimately, on February 13, 1969, black students demanded that Duke be more than a school, more than an institution — asserting all students' rights to a family, community, and a home."  -- Alan, Lexi, and Zara

This exhibit could not have come together without the assistance of many people at Duke and beyond. Many thanks to the Franklin Humanities Institute for funding the Story+ program. At Story+, Christina Chia, Amanda Starling-Gould, and Jules Odendahl-James mentored us and provided helpful training sessions. We are grateful for the numerous librarians and Rubenstein staff members who guided us in our research, supported our vision, and assisted us in creating the physical exhibit: Valerie Gillispie, Margaret Brown, Amy McDonald, Hannah Rozear, Yoon Kim, Arianne Hartsell-Gundel, Kate Collins. And thank you to all the donors and archivists who preserved the materials seen in this exhibit for posterity. On the technological side, Michael Daul was instrumental in helping us with the online version of our exhibit. Finally, we thank the inspirational men and women who occupied the Allen Building in 1969, braving violence, further alienation, and the possibility of expulsion in order to take a stance against racial oppression and demand radical change.