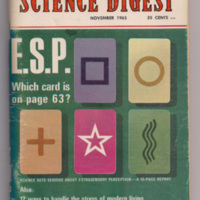 Science Digest ESP, 1965. Provided courtesy of the Rhine Research Center. Not for distribution. 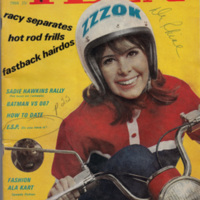 Teen Magazine ESP, 1966. Provided courtesy of the Rhine Research Center. Not for distribution

One of the primary ways in which researchers at the laboratory communicated their findings with the outside world was through publications. Ordinarily in the university world, we would tend to think of publications as scholarly papers. While these were certainly common from researchers at the laboratory, there were also a number of articles in magazines and newspapers about some of the more phenomenal aspects of the research.

Once researchers figured out a method for testing for ESP and other abilities, those  methods were shared and papers and magazines started having headlines like, "ESP- Do you have it?" These sources could even include a test that people could do at home themselves- and contact information for the laboratory in case they found they had some sort of psychic ability. 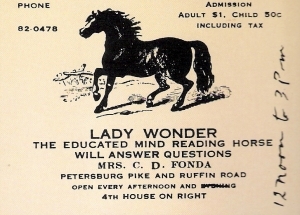 A flyer advertising Lady Wonder, the Educated Mind Reading Horse. Provided courtesy of the Rhine Research Center. Not for distribution

While those representations of laboratory research in popular media were captivating by themselves, another thing that got the laboratory attention was its more sensational cases.

As seen in the physical exhibit, one of those phenomena was Lady Wonder the Psychic Horse. After receiving letters about this horse, J. B. Rhine himself went out to test her and found her to be surprisingly good at testing. She was seemingly able to spell out the answers to basic questions as well as answer questions about the future. The testing process was difficult and went through many iterations. If you're interested, you can request to see the reports and data that were generated about Lady in the Parapsychology Laboratory Records. Ultimately, it was found that Lady was very well-trained and that her handler was the mastermind behind it, but this high profile case got the attention of many. 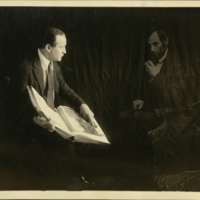 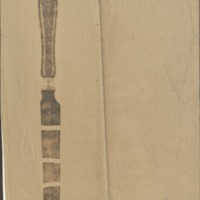 As time passed, the laboratory also gathered the attention of high profile people like Harry Houdini, Carl Jung, Upton Sinclair, and more. To the left, we see an eerie photograph of a man holding open a book to a ghostly Abraham Lincoln as well as an image of a knife in pieces.

The first is a spirit photograph created by Houdini and sent to J. B. Rhine. Houdini was passionate about debunking mystics who claimed to speak with or photograph the dead. He would often prove treachery by discovering the method used to create these fakes and making his own to show people how how easy it was.

The second is a is a photograph of a knife sent to J. B. Rhine by Carl Jung who reported that, one day, it spontaneously exploded. Jung and Rhine had an amicable relationship that lasted many years and is well-represented in the collection through letters sent back and forth. The next page shows some of those letters about the knife as well as one letter from Upton Sinclair.