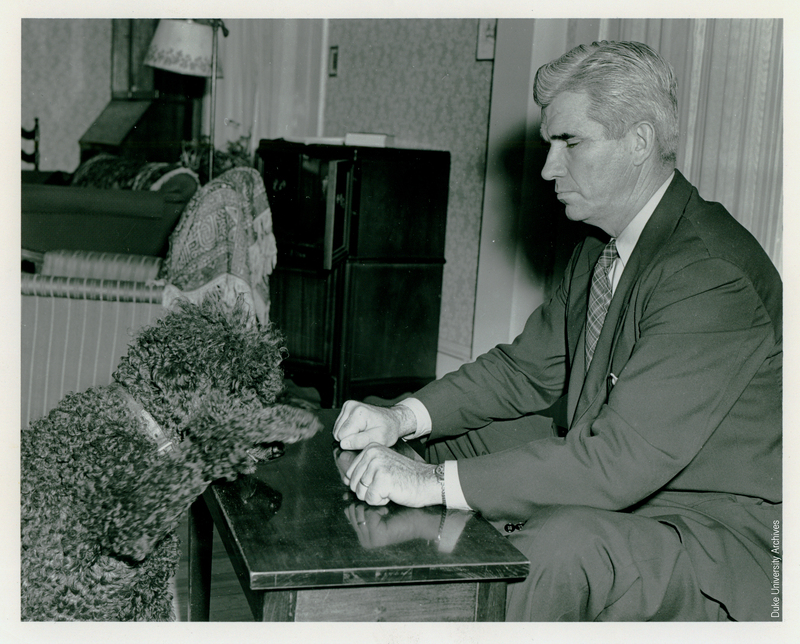 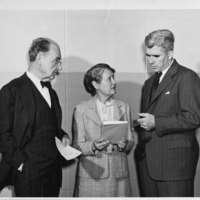 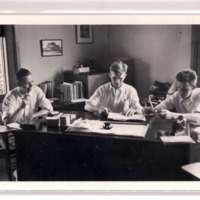 J.B. Rhine, Gaither Pratt, and a colleague working in an office. Provided courtesy of the Rhine Research Center. Not for distribution

When J. B. and Louisa Rhine arrived at Duke, there was no scientific method for quantifying and analyzing paranormal experiences. During their decades of work at Duke, they and a team of researchers dedicated themselves to tackling that issue.

In these images you can see J. B. Rhine engaging with many different colleagues. In the first, whether in jest or not may be left up to interpretation, he is presumably performing a test for animal ESP with his dog. While this image shows a more fun side of him and the research, it remains that, throughout the course of his research, J. B. Rhine did undertake animal testing for reported cases of precognition or other phenomena in animals, and this work is well-represented in the research materials in the collection.

In the other two images, we see J. B. speaking with various colleagues and associates. Building a field of study is impossible without also building human connections. In later pages, we explore a few examples of the vast collection of letters in the collection. 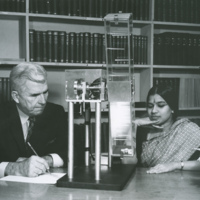 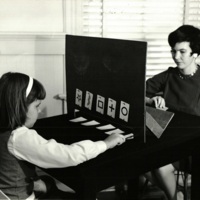 Sally Rhine Feather and her daughter testing with Zener cards. Provided courtesy of the Rhine Research Center. Not for distribution

Aside from the social aspects of building parapsychology as a field of study, Rhine also personally performed research in the laboratory. He met with subjects throughout his career, and you can find one of his handwritten laboratory notebooks on display in the physical exhibit.

Now, the laboratory work is still being done in part by a Rhine. This second photograph shows the Rhines' daughter, Sally Rhine Feather, performing testing with her daughter. The field of parapsychology wouldn't be what it is today without the curiosity and passion of the family to pursue new frontiers and build a community of practice in parapsychology.

← About the Exhibit
Testing at the Laboratory →
The Rhines