A leading American feminist economist, the New York born Barbara Bergmann (1927-2015) was author of 11 books including the influential The Economic Emergence of Women. She served on the President's Council of Economic Advisors during the Kennedy administration, and later advised both the Congressional Budget Office and the U.S. Census Bureau. She was a professor of economics at University of Maryland (1965-1988) and American University (1888-1997) and served as president of the International Association for Feminist Economics, the American Association of University Professors, and the Eastern Economic Association. Bergmann was the recipient of the American Economic Association’s Carolyn Shaw Bell Award in 2004.

Bergmann’s work was known for its focus on microsimulations of economic theories and on topics such as gender issues, childcare, poverty and Social Security. Her contributions to women and labor lay in her scholarship on work and family roles, the labor market for women and their participation, occupational segregation, single mothers, family income, welfare policies for women, affirmative action, comparable worth, wage and pay equity and sex discrimination in the workplace. She rigorously quantified these issues to provide a theoretical framework for any researcher interested in the economics of gender inequality. Her work also touched upon intersections between gender and race, highlighting that gender and racial equality are not conflicting, but complementary ideals. Bergmann often acknowledged the larger systemic factors that contributed to the formation of economic incentives and disincentives as well as oppressive practices against minority groups. Apart from her academic activities, she was an activist who advocated against discrimination by Giant Foods, Inc. and had a consulting role for the Service Employees International Union who fought against wage discrimination at a hospital on behalf of nurses in an anti-trust lawsuit in the 2000s. Ultimately, Bergmann’s own career exemplified the success of women in the traditionally male-dominated discipline of quantitative economics and was revolutionary in itself.

This collection acquired in 2017 includes the Writing Series, which consists of of essays, articles, chapters, newspapers, books and testimonies to Congress; the Project Files Series, which contains some of Bergmann’s ongoing research for an unfinished book on the decline for marriage in American as well as materials about her economic activism; the Teaching Series, which contains course packs, brochures, contracts and hiring information in the American University Economics Department. Finally, the Autobiographical/Personal Materials Series includes a selection of Bergmann’s awards and honors, including her Carolyn Shaw Bell award and her B.A. from Cornell University, personal interviews and professional photographs. 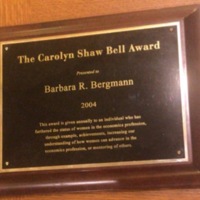 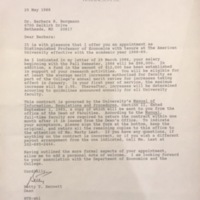 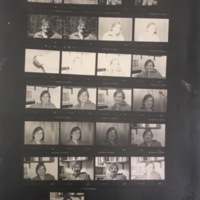