Joan Papert Preiss was born in New York City on January 4, 1925 and moved to Durham in 1959. She chaired the Triangle Friends of the United Farm Workers (TFUFW) until her retirement in the 2000s. She was also a board member of the National Farm Worker Ministry (FWMC), a member of the NC Council of Churches’ Farmworker Ministry Committee (NCCoC), and has worked with the Student Action for Farmworkers (SAF), the Farm Labor Organizing Committee (FLOC) and the Farmworkers Advocacy Network (FAN).

The collection offers an opportunity to study a woman labor activist who made an impact in the Triangle Area and to some extent nationally. She led the TFUFW to launch a variety of campaigns and boycotts, the most influential of which was the Mt. Olive Pickle Company boycott. The FLOC approached it in 1997 to negotiate for a three-party contract but was declined. After a series of efforts for the next two years such as letter writing, rallies, a 24-hour prayer vigil, delegation visits, the boycott began in 1999 and went on for five years. Preiss and the TFUFW assisted and regularly corresponded with the FLOC throughout the process and launched the boycott in Durham with a farmworkers and advocates march on March 18, 1999. During the next few years, Preiss planned rallies, such as the one in 2000 in Durham with organizations from Durham and North Carolina; organized weekly leafleting at Harris Teeter, Food Lion and Krogers to urge them to stop selling Mt. Olive; and encouraged people to sign petitions, call and write to the store manger at Krogers. More than 300 organizations around the country endorsed the boycott in its late stages. Preiss regularly wrote for the Durham Herald and the Chapel Hill Herald and even personally wrote letters to respond to those who opposed the boycott in the newspaper issues. Many of these newspaper clippings, letters, leaflets, correspondences, rally plans and articles can be found in the Organization and Boycott Files.

The same Series also documents Preiss’ efforts to promote the Chateau Ste. Michell wine boycott (1992-1993), the grape boycott by United Farm Workers (1986-1988); to write letters to Krogers urging them to stop selling Red Coach lettuce in 1980; to urge people to leaflet, speak to the manager and fill out suggestion forms at Harris Teeter and Whole Foods to support the Strawberry Worker’s Campaign in 1998 and 1999. Apart from boycotting, these labor groups that Preiss worked with were also active in attempting to improve working conditions for farmworkers, advocating against pesticides, and for the H-2A visa, through petitions, protests, lobbying and marching. The extent to which Preiss corresponded with other organizations, collected substantial amounts of media materials, wrote letters and other printed materials illustrates how extensively involved she was in the labor scene locally and nationally. 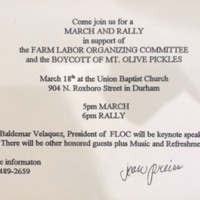 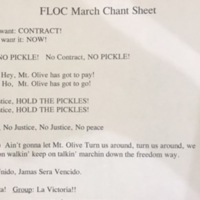 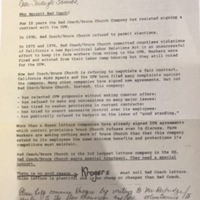 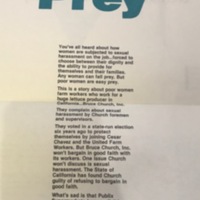