The Role of Technology in Educaction

Brochure from the audiovisual department of Duke University Medical Center

Throughout history, anatomical instruction included the study of atlases and dissection, but in the 20th century, instructors were able to use film to replace the “walk-around” examination in a gross anatomy lab. These televised practical exams required fewer staff members, reached a wider potential audience, the cadavers were not overused and with careful editing, the camera directed the student’s attention more specifically.

During the 1950s Duke University’s Department of Anatomy produced numerous instructional films, which led to the formation of the Medical Center’s Central Television Facility in 1964. The demand for televised instructional materials spawned a new division, Audiovisual Education, which consolidated the Central Television Facility and the Division of Medical Illustration into three branches; medical art, medical photography, and medical television. In 1997, Audiovisual Education became the division of Educational Media Services, and consisted of four branches: medical photography, medical art, instructional television, and media coordination. The division was dissolved in 2005. 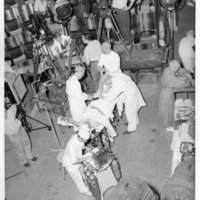 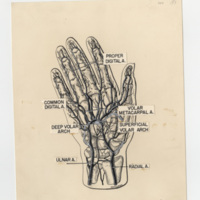 Illustration of the anatomy of a hand, created by the Duke University Medical Art Department

← Beyond the Classroom
Duke Produced Video: Functional Anatomy of the Hand →
The Role of Technology in Educaction