Duke’s libraries have always collected works by Dante. A simple search for Dante Alighieri in the library catalog will show 765 entries published from 1493 to 2021 in nineteen languages. This page explores two of the more notable stories that brought a wealth of Dante materials to Duke. 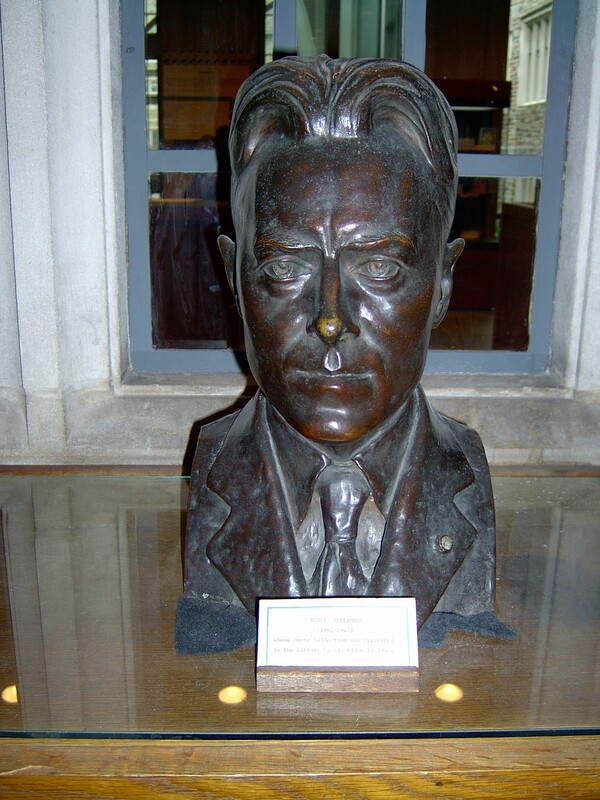 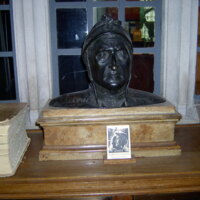 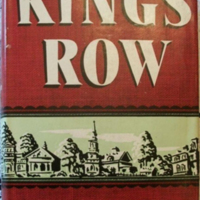 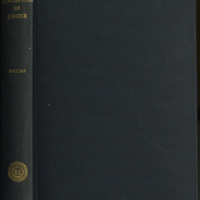 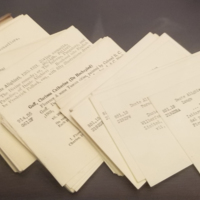 The Bellamann Collection
Henry Bellamann, a writer, professor at Vassar College, and Dante scholar died in 1945, leaving over three hundred volumes on Dante and a large bronze bust of the poet. Before his death, Bellamann communicated to his wife that he would like his collection donated to “a worthy southern collection.” Mrs. Bellamann referred the issue to bookseller and friend, James Gittmann, whose bookshop Bellamann had often frequented when living in Columbia, South Carolina. Dr. Broadus Seigler, a former student at Duke University, shared with Gittman that the Duke University Press had published one of the volumes in Bellamann’s collection, Dante’s Conception of Justice, by Duke Professor Allan Gilbert. With a little help from this Duke alumnus, the Duke Press, and Gilbert, this large collection of materials was donated to the Duke University Library and remains a useful collection today. A few of the books from the original donation can be seen in the exhibition. 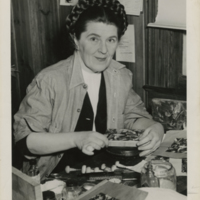 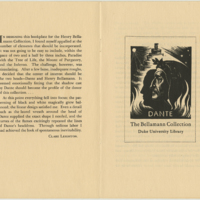 A bookplate by Clare Leighton [for the Bellamann Dante Collection]

Clare Leighton, a member of Duke’s Department of Art, Aesthetics & Music (1942-1945), was commissioned in 1948 to create a woodblock for the bookplates to be used in the Henry Bellamann Collection. Note the silhouettes of Dante and Bellamann that reflect their busts seen here. The artwork was paid for by Mr. Gittmann in honor of his friend, Henry Bellamann. 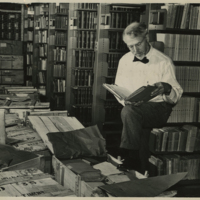 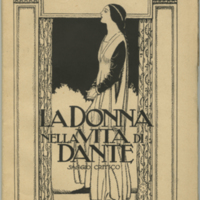 Mazzoni Collection
In 1947, Professor Allan Gilbert of Duke’s English Department was researching Renaissance works of Ariosto in Italy when he heard of a sale of over 50,000 rare Italian pamphlets and a library of valuable monographs. The collection had been assembled by the late Guido Mazzoni, a professor of Italian literature, Dante scholar, and Italian senator, based in Padua and Florence. The pamphlets date from the sixteenth to twentieth centuries and include materials on Italian history and linguistics, European history, political satire, Fascism, Futurism, and both World Wars, as well as ballets, dramas, librettos, poetry, epithalamia, and a large number of works about Dante. After some convincing, Vice President of the Educational Division William H. Wannamaker approved the purchase of the collection. Shown here is one example of a pamphlet from the collection and a photograph of Gilbert unpacking the collection when it arrived. The Mazzoni pamphlet collection can be explored in the onlline collection guide.