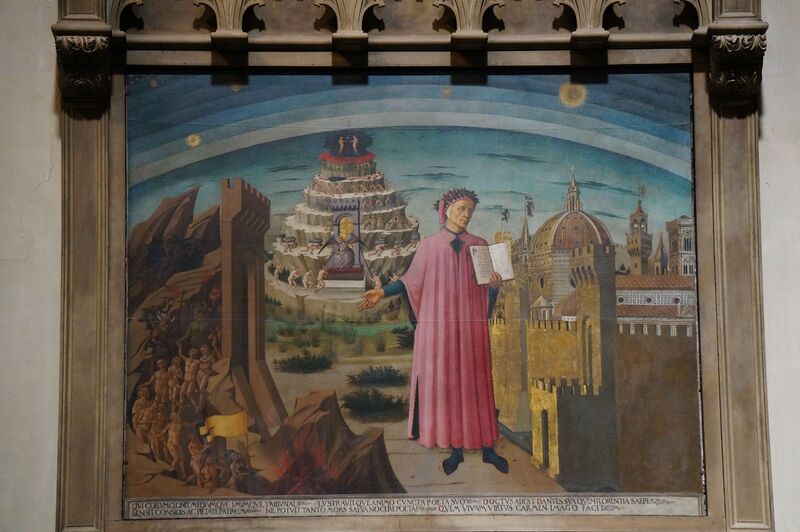 Dante and the Three Kingdoms

You’ve probably heard of The Divine Comedy, but have you ever considered why this monumental poem has permeated pop culture and affected diverse audiences for centuries? Dante and His Afterlives explores the ways Dante’s work has survived and continues to thrive, even reaching cultures that Dante never knew in Africa, Asia, and the Americas.

Dante Alighieri was born in Florence, Italy, in 1265. When Dante died in Ravenna in 1321, he had spent two decades in exile from Florence writing his masterpiece. Although Dante only ever referred to his poem as The Comedy, in the sixteenth century it became known as the Divine Comedy for its theological content and masterful poetic form. Dante’s rigorous and realistic representation of Inferno, Purgatory, and Paradise has long challenged readers.

While Dante is typically remembered for the tortures of Inferno and its many adaptations, the Divine Comedy does much more than mete out punishments to sinners. His visit to Hell is only the first third of a poem which considers issues of justice, divinity, free will, politics, and the power of poetry. In fact, the final line of Inferno, “to see the stars once more” [a riveder le stelle] fills the reader with hope for what’s to come. In contrast to his dark portrayal of the underworld, Dante optimistically imagines the salvation of mankind in the latter two parts of the poem, Purgatory and Paradise, expressing a vision of political and social harmony.

Dante’s poetry was unprecedented. In his own era, Dante challenged convention by writing in Italian, the vernacular, instead of Latin, the established literary language of the period, and by creating a vivid afterlife that blended classical thought, including Aristotle’s philosophy and Ovid’s mythology, with Christian ideology. Over the seven hundred years since Dante’s death, his poetry has inspired writers, artists, and thinkers of diverse national, linguistic, and ethnic identities to consider the most fundamental questions of humanity. How can we live justly? Is there such a thing as free will? Can we reconcile love and reason? What awaits us after death?

To mark the seven hundredth anniversary of Dante’s death, Dante and His Afterlives displays Dante’s works and charts their reception across epochs and borders – from medieval commentaries to modern responses. This exhibit brings into focus the distinctive and unexpected elements of Dante's vision through his texts, literary and visual adaptations, architecture, and dance. Far from being an exile fixated on punishing his enemies, the exhibit reveals that Dante is a radical poet of hope.