Dante meticulously outlined a complex and highly-ordered system of Inferno, Purgatory, and Paradise. The Inferno follows a system of organization based on Aristotle's Ethics ; the Mountain of Purgatory is structured according to the seven deadly sins; and in Paradise, Dante's knowledge of the planets informs his design of the heavens. Dante's detailed descriptions and his unusual logic have generated numerous attempts to make sense of his masterpiece visually. Thousands of maps of the Comedy exist. The creations shown here are unique but also representative of the various approaches to mapping the Comedy .

Artistic interpretations that include vivid illustrations within a schematic framework, as seen in this manuscript decoration of the Inferno:

Dante Alighieri, illuminated by Bartoloemo di Fruosino, Inferno with the Excellent Commentary (1301-1400).
Note the red figure, Dante, and the blue figure, Virgil, as they travel through each circle. 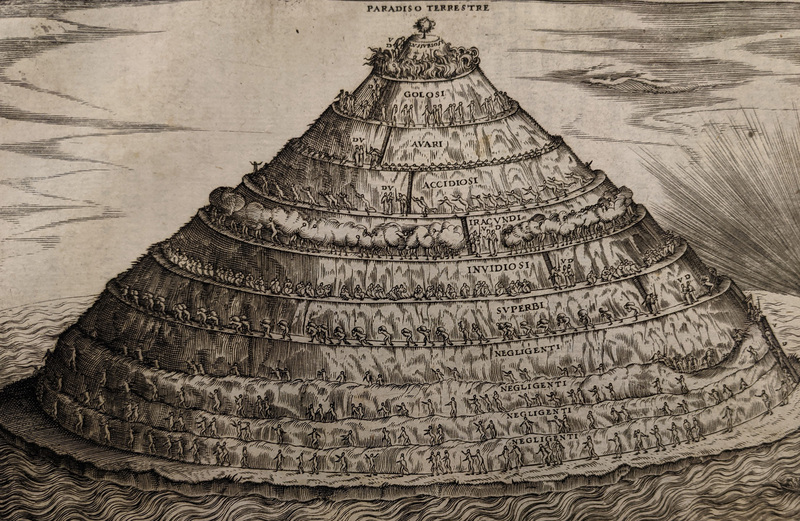 Illustrations that provide a symbolic depiction of the organization of souls in the afterlife, as seen in this early etching of the Mountain of Purgatory:

Dante Alighieri, Dante with the exhibition of M. Bernardino Daniello da Lucca (1568).
This map is from a volume in the Rubenstein Library that once belonged to Allan Gilbert , a Duke professor of English who taught, published, and collected material about Dante in the early twentieth century. 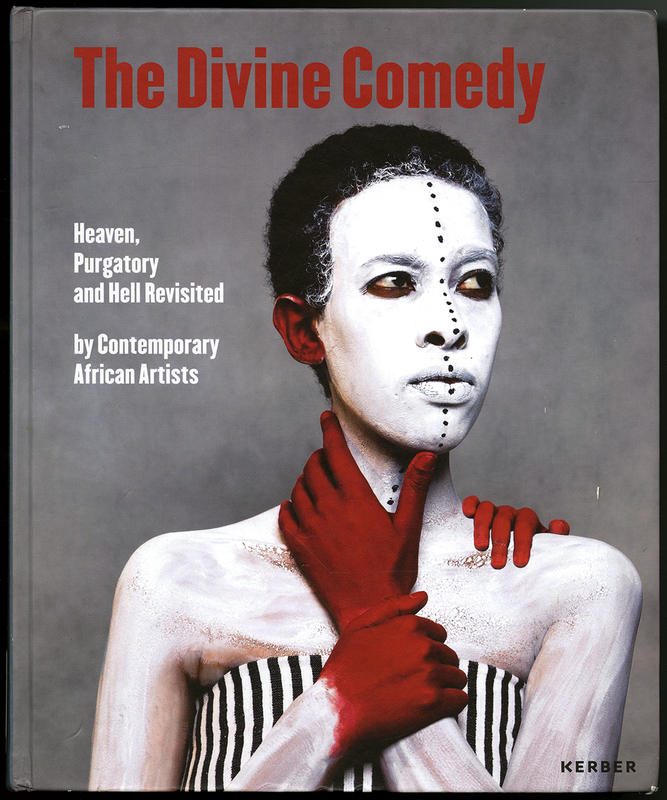 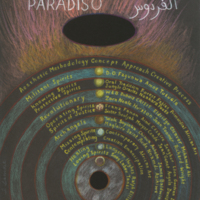 Interpreting Dante's organization to reimagine intellectual and cultural heritage, as seen in this African artist's illustration of Paradise:

Simon Njami, The Divine Comedy , (2014).
This catalog from an exhibition at the Smithsonian Museum of African Art collects contemporary African artists' interpretations of The Divine Comedy : “Forty of the best known and emerging artists from 18 African nations and the African diaspora working in media as diverse as video projection, installation , painting, sculpture, textiles, printmaking, photography, and collage explore diverse issues of politics, heritage, history, identity, faith, and form. In so doing, they reveal that one person's vision of heaven, purgatory, or hell might not match another's. "

Creative cartographic visualizations that show Dante's journey in a single image, as seen in these two illuminated manuscripts:

Dante Alighieri, DivinaCommedia Codex Altonensis , (1965).
This flattened corkscrew visual shows the journey from the Inferno to Purgatory. Begin in the upper left with Dante and Virgil at the Gates of Hell then spiral through each layer of the Inferno as you read the text, climb over Satan, and enter Purgatory. At the lower right, you can again see Dante and Virgil making their way out of Hell. 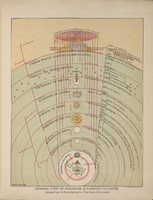 Diagrams that assist the reader in understanding the structure of the realms and where Dante's encounters take place, as seen in the colored map of Paradise:

Michelangelo Caetani, General View of Paradise According to Dante, (ca. 1855).

Precise maps that envision the physical spaces and provide their proposed dimensions, as seen in these drawings of the Inferno:

Dante with the exhibition by Christoforo Landino and Alessandro Vellutello… (1578) .