In Paradise, Beatrice takes over as Dante’s guide and teacher. Defying stereotypical portrayals of women in medieval texts, Dante’s Beatrice has a voice and uses it. She is eloquent, rational, and erudite.

A central concept of Dante’s Paradise is harmonious diversity. For humanity to live in peace and fellowship, for society to function, various talents and characters are necessary, as Dante suggests in the stanza: “so, one is born a Solon, one a Xerxes, and one a Melchizedek, and another, he who flew through the air and lost his son.” Each of these examples represents a different set of skills or abilities: Solon governs, Xerxes is a warrior, Melchizedek is a priest, and Daedalus creates.

At the end of Paradise, Dante’s final task will be to report what he has seen and learned on his journey, so that others might see and learn as well. Thus, the Comedy is born. 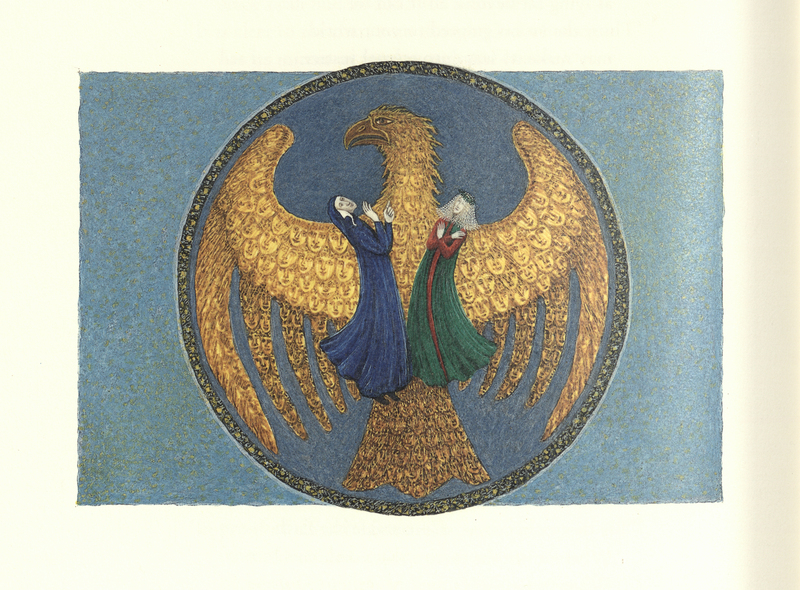 Dante Alighieri, The Divine Comedy with images by Monika Beisner (2007).
The spirits of just rulers, found in the sphere of Jupiter, spell out a Latin message for Dante: “Diligite iustitiam qui iudicatis terram” (Cherish justice, you who judge the earth). They then assume the form of an eagle, the symbol of both the Roman Empire and Jupiter, the king of gods in Roman mythology. Although comprised of many souls, the eagle speaks to Dante with a single voice, representing how diverse individuals come to be one with God’s will in Paradise. The eagle singles out the extraordinary salvation of Ripheus and the Emperor Trajan, classical figures who would have had no knowledge of Christ. This scene serves as another reminder of the political valences of Dante’s poem*; those who seek justice on earth will be rewarded in the afterlife. This stunning illustration by German artist Monika Beisner makes use of the colors that one would typically see in a manuscript of the Comedy (see below) while creating a distinctly contemporary image. Her depiction expertly captures the eagle’s grandeur as well as the individual souls contained within. 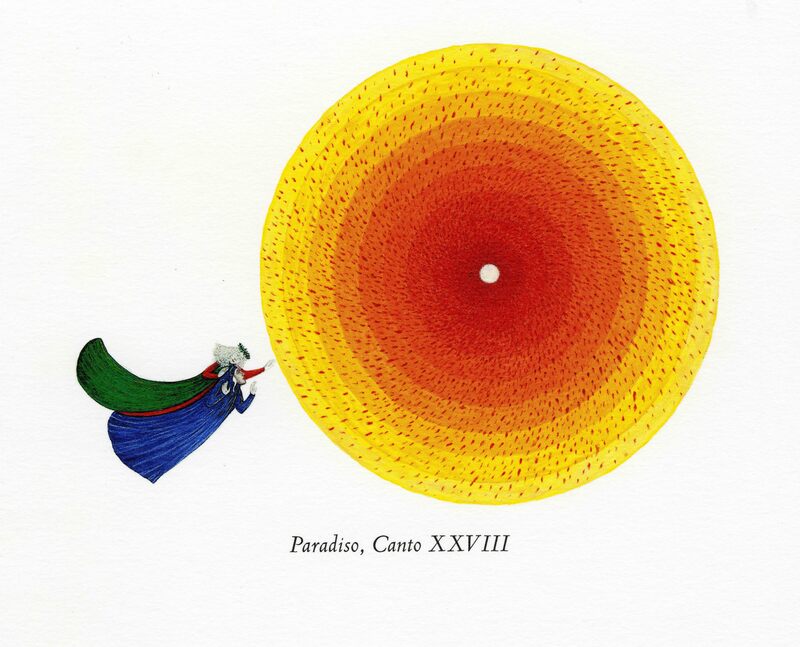 Dante Alighieri, The Divine Comedy with images by Monika Beisner (2007).

This captivating illustration by Monika Beisner shows Dante and Beatrice as she explains the organization of the universe to him in Paradise 28. Beisner’s image artfully conveys Dante’s view of the universe from the heavens: nine concentric circles with God at the center. The vivid colors are typical of Beisner’s illustrations and help bring Dante’s detailed descriptions to life. 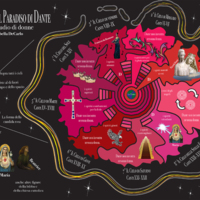 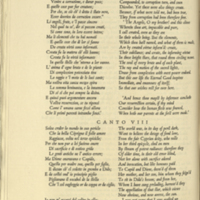 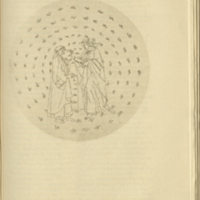 Dante Alighieri, illustrated by Sandro Botticelli, La Divina Commedia or The Divine Vision (1928).
de Carlo, Isabella, Map of Paradise (2021).
In this graphic created by Isabella de Carlo (Trinity 2021), the nine heavens unfold from concentric circles into the form of a rose, representing the final level of Paradise, the Empyrean. This graphic also charts the women that Dante meets throughout this stage of his journey, including the Virgin Mary, Eve, the Empress Constance, and of course Beatrice, who is also depicted in a black and white sketch by Sandro Botticelli shown here. 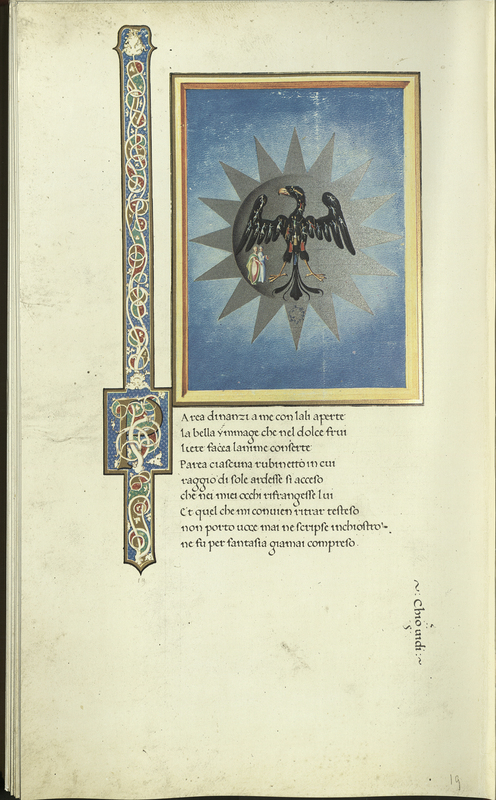 Dante Alighieri, The Divine Comedy, facsimile from Vatican Urb Lat 365 (1480).
This deluxe manuscript of Dante’s Comedy was commissioned in the 1480s by Federico da Montefeltro, the Duke of Urbino. An illuminated copy such as this would likely have been used for display rather than study. The lavishness of the book speaks to the positive reception of Dante’s Comedy in Renaissance courts in Italy and its early canonical status. Pictured here is Paradise 19 with an illustration of the Eagle of Justice (see above).