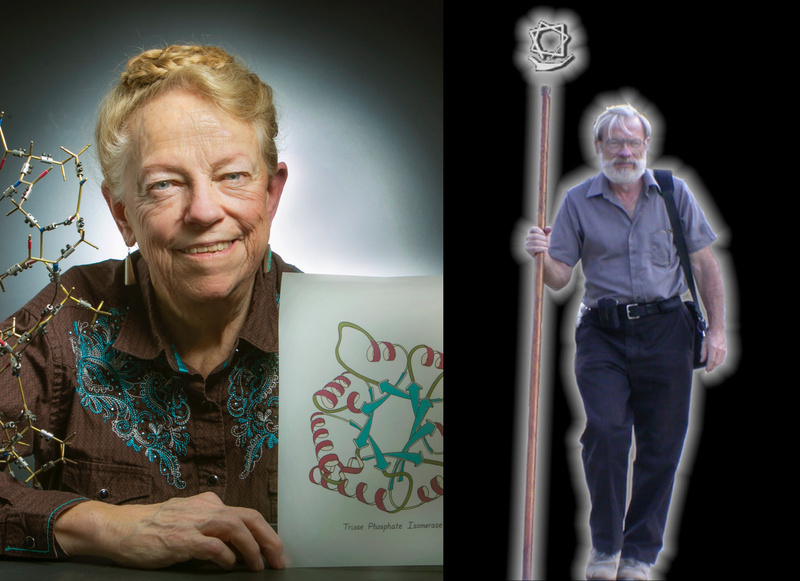 David Claude Richardson grew up in rural Delaware County PA, near Philadelphia, and Jane Shelby Richardson grew up in Teaneck NJ, near New York City, so they both had the combined advantages of woods and streams to explore on one hand and science and art museums on the other. Their fathers were a doctor in general practice and at Elwyn School (Claude Erwin Richardson) and an engineer in early color television at NBC (Robert Evart Shelby) respectively, and their mothers a professional artist (Anne Chuse Richardson) and a teacher of English composition and literature (Marian Eikel Shelby). Each of them had an older sister. Rose Richardson Olver was the first female professor at Amherst College, married to John Walter Olver, US congressman from western Massachusetts since 1991. Barbara Shelby Merello served in the US Information Service in Brazil, Costa Rica, Spain, Argentina, and Peru, translated novels from the Portuguese, and married Agustin Merello, a futurist from Argentina. Dave and Jane have two children: Robert David Richardson is an engineer at Lockheed, living in Oakland CA, and Claudia Jane Richardson is the bread baker at Fearrington House, living in Durham NC.

Dave collected minerals and explored the local landscape throughout school, rewarded with the changing seasons, the behavior patterns of frogs and beef cattle, and the charms and complexities of crystals. He got a head start in chemistry from exhibits at the Franklin Institute, and from helping Swarthmore's Prof. Gil Haight set up his theatrical general public lectures in chemistry at the Wagner Free Institute of Science in downtown Philadelphia. Jane was an amateur astronomer, acquiring a love of natural history, observation, and instrumentation from counting meteors, chasing eclipses, grinding and polishing a 6" telescope mirror and machining its mount, and plotting naked-eye observations of Sputnik. She still watches for Perseid meteors on hiking trips. Jane's high-school crowd helped her count meteors and track Sputnik. Dave's high-school crowd loved to talk about science, but got rained out when they first tried to spot Sputnik. Both families took long car trips to scenic parts of the country, the Richardsons toured Europe, and Jane spent a summer in Rio de Janiero with her sister. Dave developed his general talent for fixing things in projects with his father (later applied to lab equipment and software debugging). Jane learned writing from her mother and math and carpentry from her father, but unfortunately did not pick up even a hint of her sister's linguistic talent.

Dave and Jane met as freshmen at Swarthmore College, when Dave deliberately started bringing his lunch to the physics (and science fiction) library where Jane hung out. They both loved the intellectual environment and beautiful surroundings of Swarthmore. Jane switched from physics and astronomy to philosophy with a minor in math and physics. She thrived in the intense discussions, all-day labs, and week-long schedule of the honors program. However, a probably undesirable side-effect was that she learned how to stay up all night researching and writing an honors paper and then to present it fairly coherently before collapsing the next day. Dave especially enjoyed the senior-year revisit of freshman inorganic chemistry, comparative anatomy and biology classes with tales of a sloth migrating slowly around Prof. Enders' shoulders and taking a swipe at his formal dinner plate every few minutes, and a physiology lab that led to a senior-year chemistry presentation on implications of the exciting, brand-new crystal structures of myoglobin and hemoglobin.

After graduating in 1962 we went together up to Boston for graduate school, Dave at MIT and Jane at Harvard, and were married on Ground Hog's Day 1963. Dave joined Al Cotton's lab to do structural inorganic chemistry, but happily ended up doing a protein crystal structure -- at least the nuclease had calcium bound at the active site! It turned out that the excellent philosophy department at Harvard specialized in things very different from Jane's interests, and she decided to leave with an MA after a year. (She got a great deal out of courses in the botany department, meanwhile.) After trying some other options, she joined Dave's project as a technician, and the combination was so synergistic that we've worked together ever since. The only real frustration in such a joint professional career is that it's very hard for others to accept that two people can truly complement one another with different but equally essential contributions to their joint productivity and innovation. 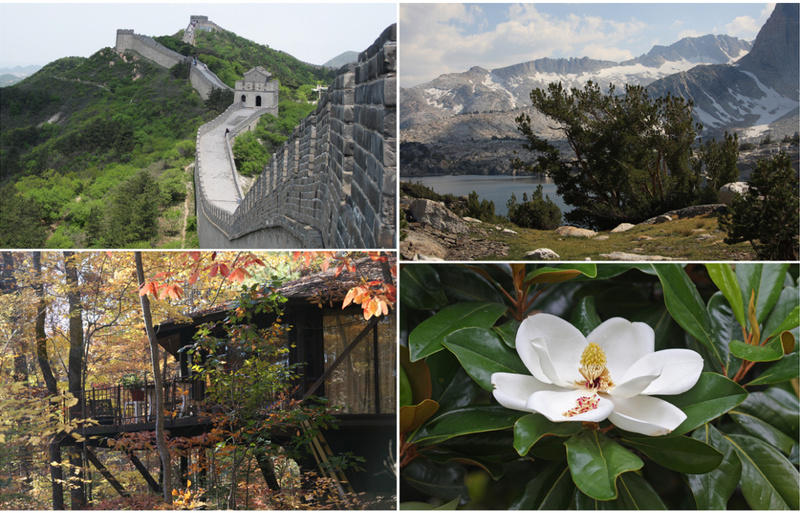 Aside from macromolecular structure, our most consistent and engrossing hobbies have been backpacking, house building, travel, and photography. One of the great side-benefits of working in science is that it is thoroughly international. As well as (nowadays) easily collaborating with colleagues anywhere, we've gotten the chance to visit many fascinating places such as Russia, China (Figure 1), India, Australia, and much of Europe. On the ends of meetings, we almost always take a few days to explore.

We have (literally) built our own house twice, first north of Durham on the bank above the Little River, and after that was taken by eminent domain for a reservoir, on an enclave in Duke Forest (the Duke Forestry School's research forest) partway between Durham and Chapel Hill. The geodesic-dome half of the house looks like an icosahedral virus, and the cantilevered-octagon treehouse half (Figure 1) looks like a T-even virus from the side. North Carolina, as well as the Sierras, has many elegant flowers to photograph, such as the magnolia just outside our lab (Figure 1).

Nearly every year since 1967 we've gone backpacking on or near the John Muir Trail in the Sierra Nevada. As well as the exercise, the gorgeous scenery, and the wildflowers, we also find those trips essential for the perspective and the new ideas we can get after the first week or so. Figure 1 top right shows a classic high-Sierra view past whitebark pines, in the Hoover Wilderness north of Tioga Pass. We have a cabin at 7000ft on the east side of the Sierras, shared with quail and foxes, Jeffrey and pinyon pines, sagebrush and stream orchids. It's a perfect basecamp for backpacking and day hikes, and has wonderful views from the porch to help inspire our writing, programming, and molecule-gazing.

- Collaboration is better than competition.

- The model is not the molecule.

- Science is fun, especially the details.

- We believe in working on what looks most intriguing and productive, enjoy methods development, and prefer projects that other people don't yet see as both important and possible, so that they might not be done if we didn't do them. Therefore we've reinvented our research emphasis many times: from protein crystallography to structural bioinformatics, to protein design, to molecular representation and computer graphics, to lowest-level details of atomic packing, to RNA backbone and ribosomes, to model validation and improvement, to crystallography again. However, within that rather random-looking trajectory we think there is a consistent signal of unifying themes: fascination with the determinants of macromolecular three-dimensional structure, and seeking new understanding largely by redefining the boundary between signal and noise, in either direction.