For most of the 1970s, "Byron's Bender" wire models were the main way to make simple hand-held three-dimensional physical models of protein structures. The prototype wire-bender machine was designed and built by Byron Rubin in the Richardson lab and then produced commercially. 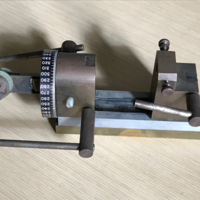 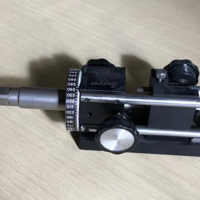 Prototype & commercial wire benders
Shown here are a prototype wire bender and a commercial bender still sold by Charles Supper Co. The bender uses 1/8-inch steel wire, bent at each Cα position. The relationship between one Cα and the next is specified by a distance (essentially constant at 3.8Å) for moving the wire forward, a dihedral-angle direction set on the circular dial, and finally a bend angle done with the lever handle. Those same coordinates describe the wooden model. [Rubin & Richardson 1972, Biopolymers 11: 2381] 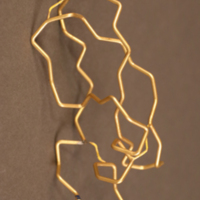 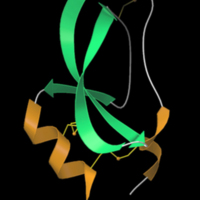 Completed wire-bender Cα model
Bender model of pancreatic trypsin inhibitor (BPTI), a small protein that binds very tightly to trypsin, keeping it inactive in the pancreas before it is released into the stomach for digestion. To prevent rust, the completed models were usually either nickel-plated or gold-plated. A later ribbon drawing of BPTI is also shown for comparison. 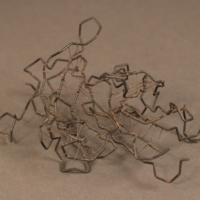 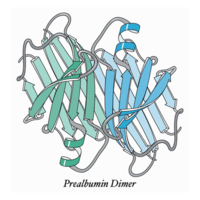 Prealbumin wire-bender model
Bender model of a dimer of Prealbumin, a thyroxin-binding protein; the thin wires represent the hydrogen bonds that hold together this large β-sheet. A ribbon version, drawn by Jane in Adobe Illustrator, is also shown for comparison. 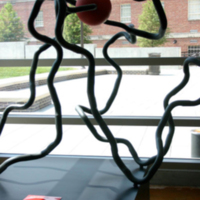 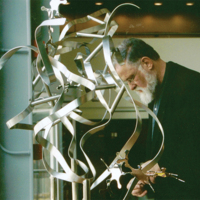 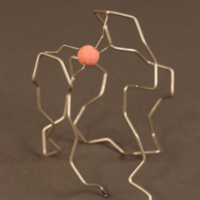 Cα-backbone as a large sculpture
Shown (top left) is the bender-style Cα sculpture of rubredoxin outside the ground-level lecture hall in French Building at Duke University. Byron Rubin made it in the early 1970s by listing the distance, bend angle, and dihedral instructions for custom-bending Midas muffler pipes and welding them together, with the active-site iron represented as a rust-red sphere. After 30 years in crystallography, Rubin left research and became a professional sculptor of molecular subjects, such as the follicle-stimulating hormone he's photographed with here (center). A wire-bender model of rubredoxin is also shown.