Other Uses and Influences of Ribbons

Ribbon drawings aid scientific understanding that can lead to notable advances. They have also become cultural symbols of science and subject-matter for the arts. 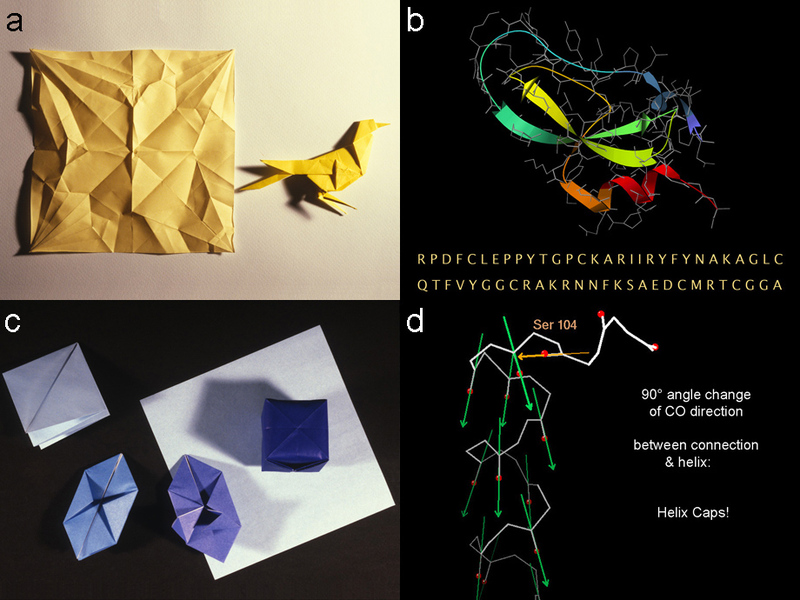 Origami, protein folding, and helix caps
When Jane and Dave were asked to give a lecture introducing their field to diverse scientists at a AAAS meeting, Dave came up with origami as an analogy to help explain protein folding. The further they explored this idea the more illuminating it became - culminating in a major contribution to understanding protein structure. An origami piece (Image, part a) starts from a generic, uninteresting sheet of paper, with its future form encoded by a mysteriously specific set of creases that fold into a recognizable object such as the canary here. A protein (b) starts from an uninteresting, floppy polypeptide chain, with its future form encoded by a mysteriously specific sequence of amino acids that can spontaneously fold into a functional biological molecule. The canary, with 180° folds, makes a flat, two-dimensional origami object. In contrast, three-dimensional origami such as a box (c) requires some 90° folds. For proteins, helices and sheets are approximately linear or flat, with peptide CO groups all pointing in the same or opposite directions. Therefore, they looked for 90° corners in folded proteins. Indeed, they found abrupt direction changes with adjacent CO groups at 90° (arrows in d), leading to the productive scientific concept of helix N-caps and C-caps, with sequence patterns quite different from helix interiors.
[Richardson & Richardson 1988, Science 240: 1648; Richardson 2018, SciArt Mag. 23, Oct.] 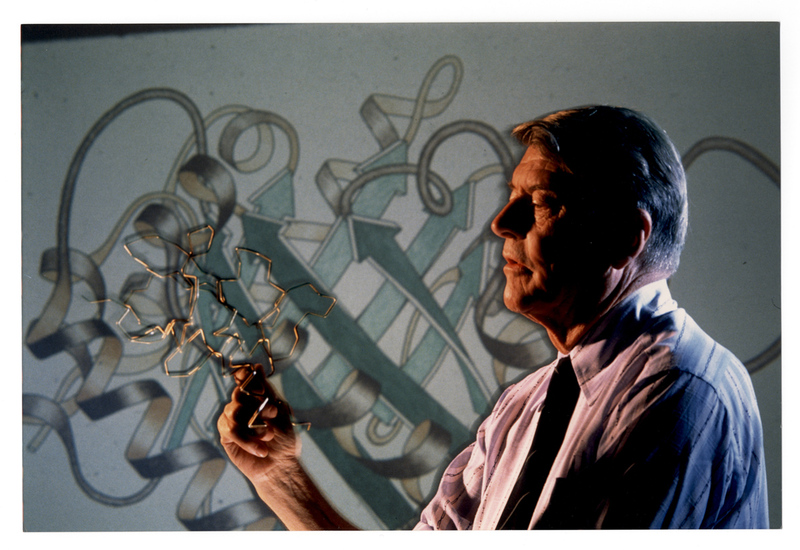 1972 Nobel laureate, Christian Anfinsen
For a publicity photo, Anfinsen chose to hold a gold-plated wire-bender model of Staphylococcal nuclease, with Jane's TIM ribbon drawing as the background. In 1964 Anfinsen had persuaded Dave to solve the nuclease structure, for a study of protein folding without the disulfide crosslinks that enabled but complicated his revolutionary early work. 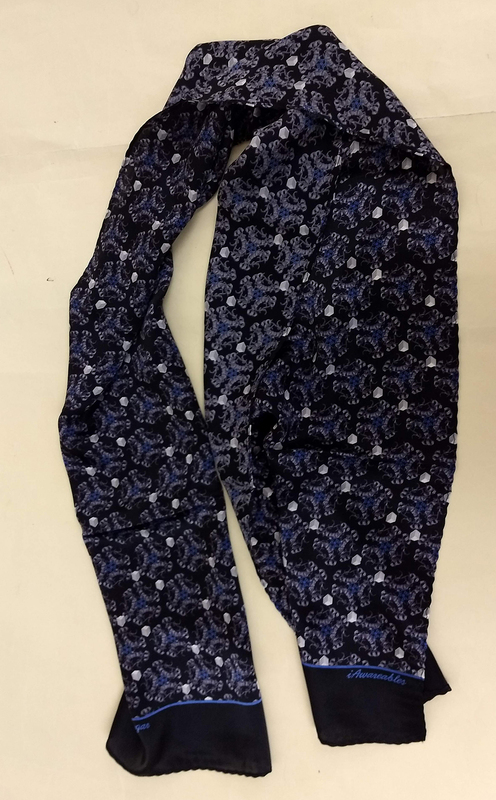 Ribbons for diabetes, silk scarf
The National Academy of Sciences produces outreach items to raise awareness of science's major role in better treatment of disease. For diabetes, the scarf shows ribbon diagrams of the hexamers that store insulin in the body, and the cubic crystals they form.
Bought in the Academy gift shop, 2019 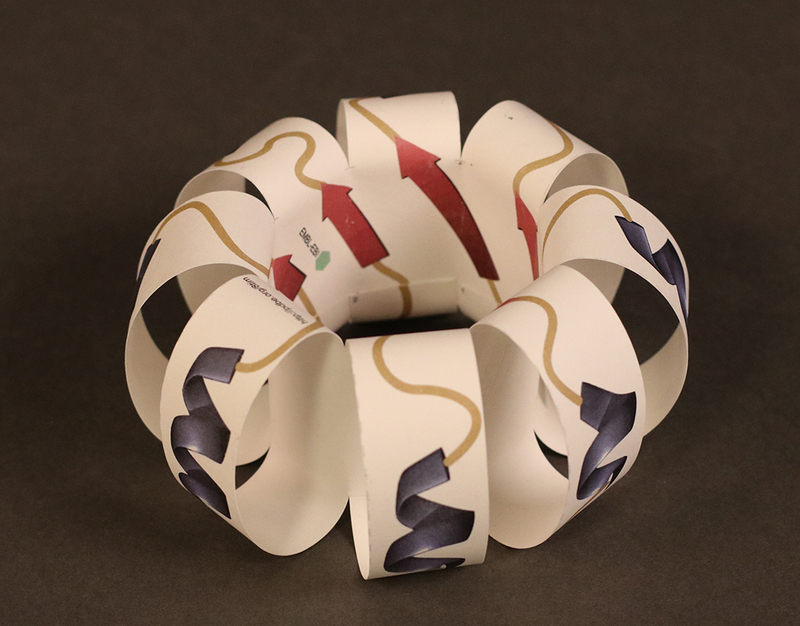 Paper model of the TIM barrel 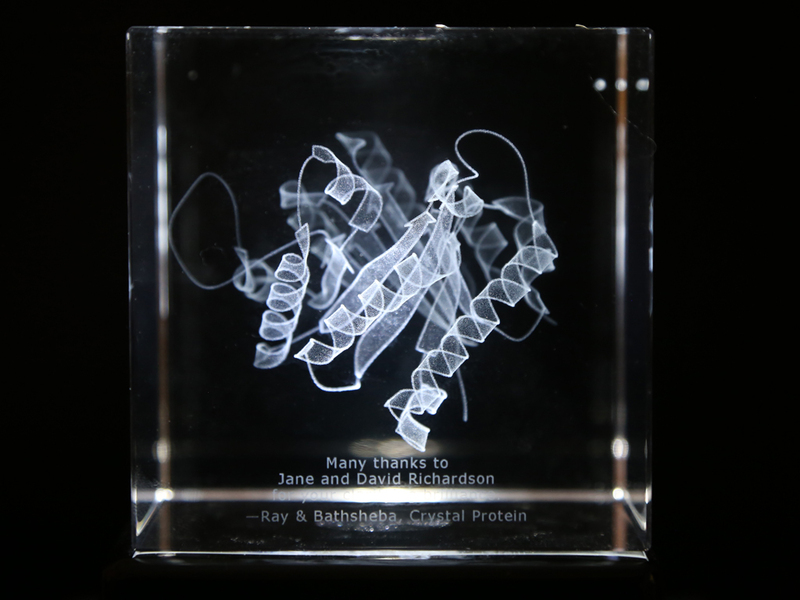 Laser-etched sculpture of TIM ribbons given to Dave and Jane by the sculptor, Bathsheba Grossman 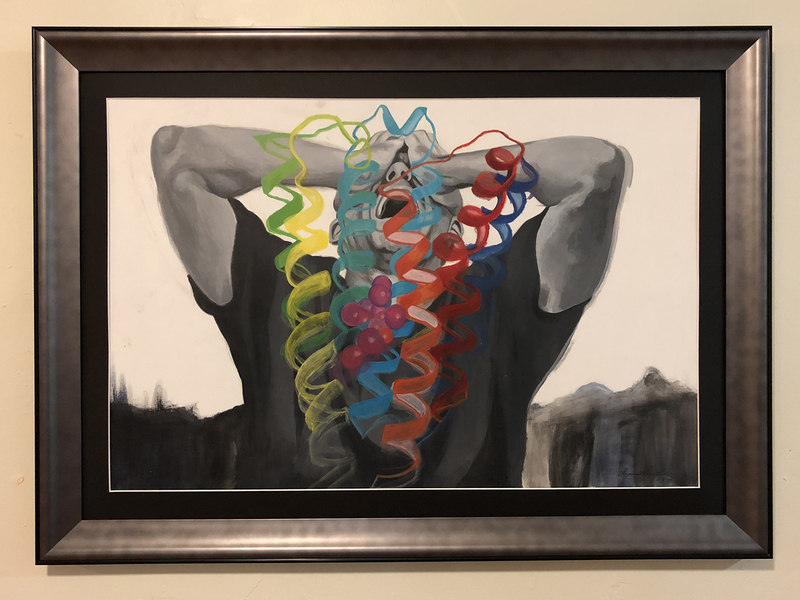 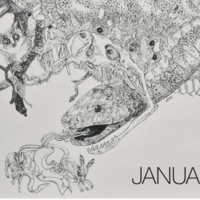 Art connecting molecules with people and animals
Toxins (left), a drawing by high-school student Ayshini Senadeera melds the animals producing toxin molecules with ribbon drawings of the proteins affecting their victims; it was published in the 2020 PDBe calendar.

Oh My Goodness (right), a painting by artist and physicist Samantha Lish symbolizes the emotional effects of stress-hormone receptor by combining its ribbon drawing and the man stressed.

← Teaching and Spreading Ribbon Diagrams
Glossary →
Other Uses and Influences