The Initial Experiment: How Can We "See" a Protein?

Today, synchrotrons (extremely powerful sources of X-rays) produce most of the data needed for analyzing proteins, but scientists used to do this work in their own labs using microscopic sized crystals, small X-ray sources, and special cameras. 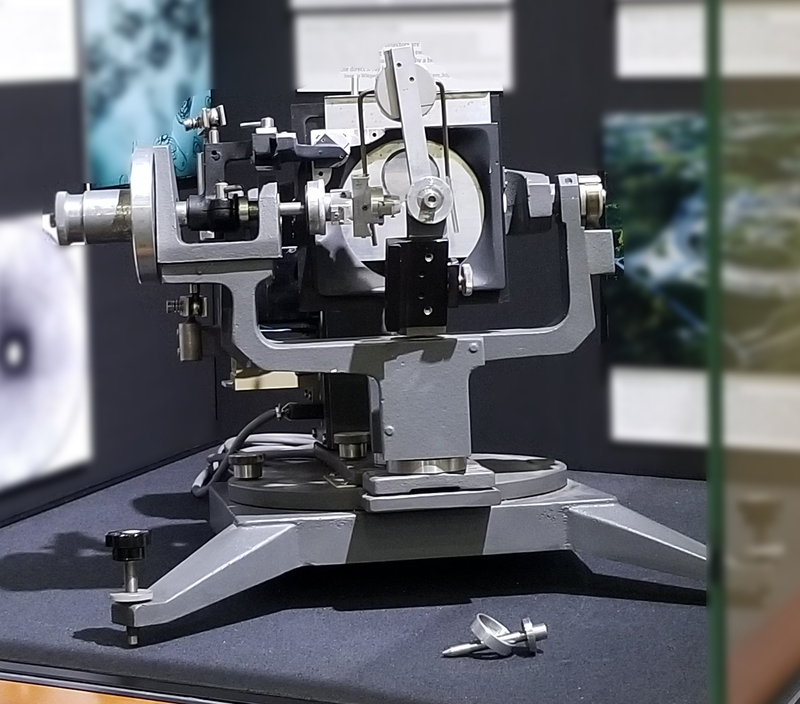 Precession camera
Around 1970, the diffracted X-ray spots from a protein crystal were often captured on film by a precession camera, which uses a complex relative motion of film and crystal engineered to spread out the spots in a regular array easily interpreted, or "indexed", by the human crystallographer. The tight X-ray beam enters from the right and hits the crystal inside the glass capillary. During the camera's precession motion, diffracted rays are selected by a radial screen and recorded as individual spots where each diffracted ray hits the photographic film. 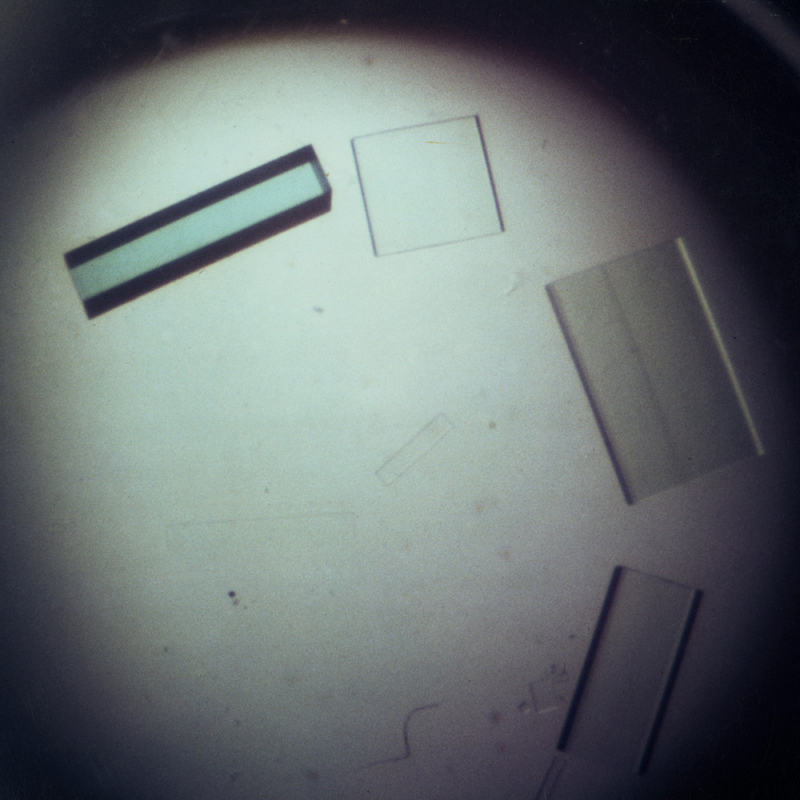 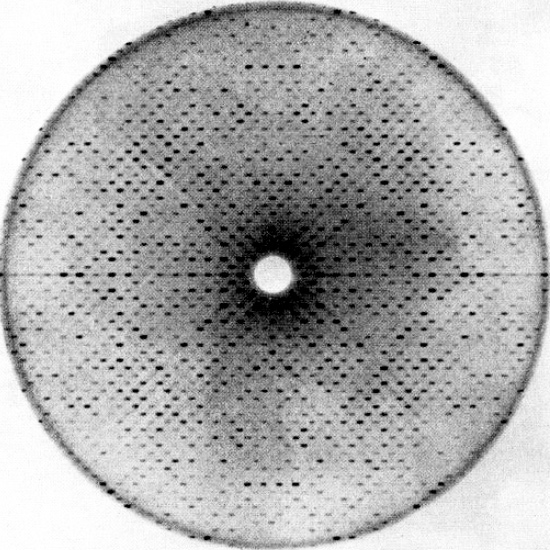 A precession photo from SOD

A precession photo from SOD
This photo is one of many that made up a SOD dataset at 2Å resolution, taken with the above camera. The X-rays are diffracted into separate, individual spots because of the repeating geometry of the crystal lattice. This precession photo shows one plane (a slice, not a projection) through the three-dimensional diffraction pattern of spots. The intensity of each spot depends on how the atoms in the molecule relate to planes with that specific direction and spacing. Those intensities, plus their phases (in 1970 determined by comparing other datasets with heavy atoms bound) are combined mathematically by a Fourier transform to produce a three-dimensional image of the electron density, and thus the atoms, inside the molecule.  [Richardson et al. 1972, J. Biol. Chem. 247: 6368] 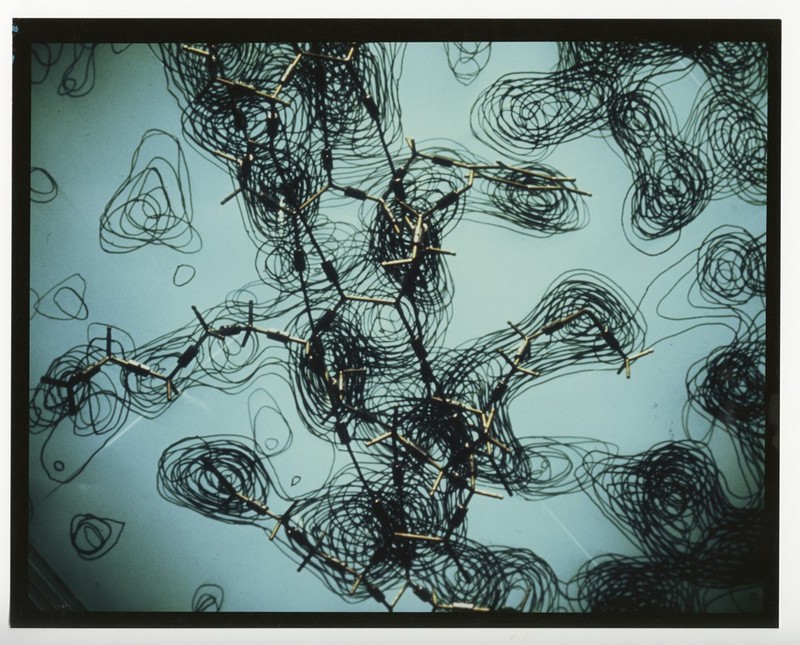 Electron density map
In the 1970s, the electron-density contours were hand-drawn onto stacks of glass or plastic sheets, often at a scale to match that of brass models like the one created for the lab in the 1960s. This image shows a few layers of the 2Å resolution map for Staphylococcal nuclease. A section of brass model is laid on top, lined up with backbone and sidechain density of residues 59-69 in α-helix. [Arnone et al. 1971, J. Biol. Chem. 246:2303] 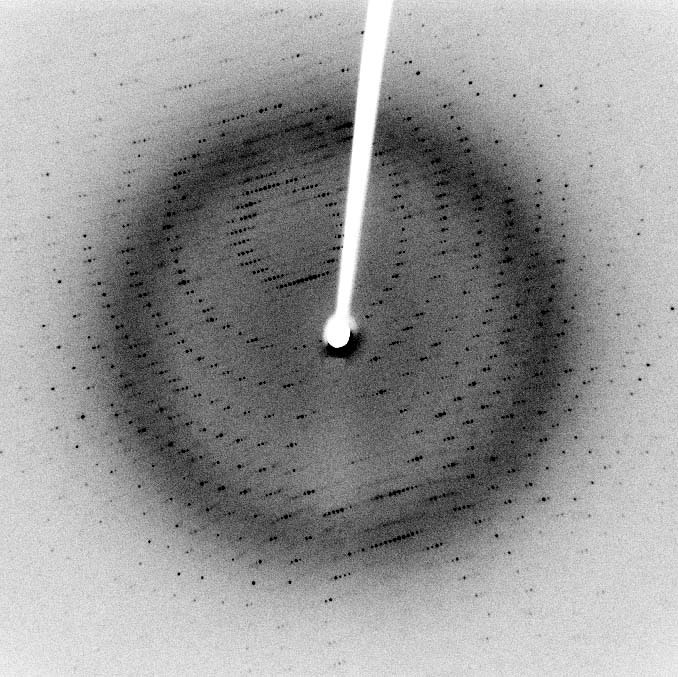 Modern diffraction image
Currently, X-ray diffraction data are recorded by two-dimensional detectors with electronic readout. Source and detectors are sophisticated, but the geometry is simple, producing interrupted swaths of spots that are "indexed" by software. The shadow is cast by a beam stop that protects the detector from the direct X-ray beam. 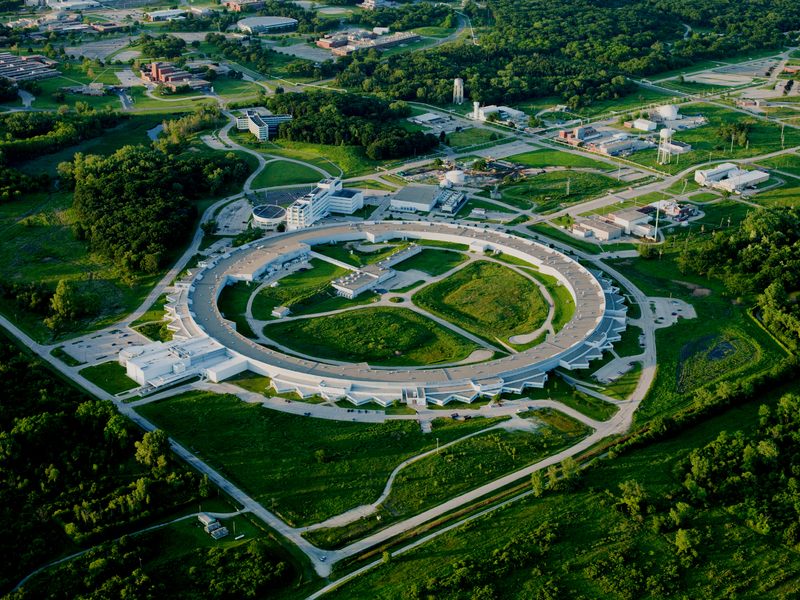 Synchrotron X-ray source
Currently most macromolecular crystal data is collected at synchrotrons, such as the Advanced Photon Source at Argonne National Lab shown here. Radial acceleration of the circulating particles gives off very intense X-rays, which provide rapid data even for very small crystals and can be tuned to wavelengths that let the experiments determine phases as well as intensities, using the "anomalous" (out-of-phase) diffraction from a specific type of heavy atom. 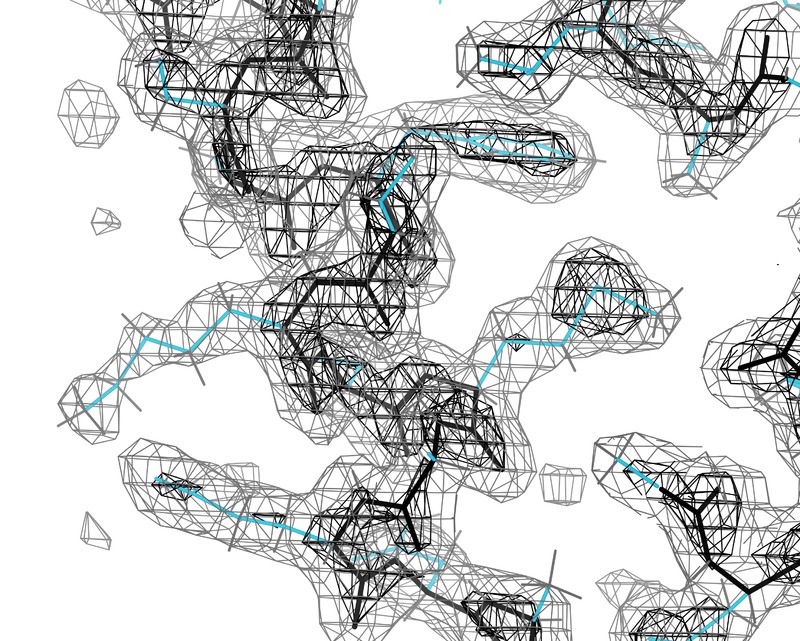 Modern electron-density map
These days, electron density maps are both displayed and analyzed on computers. This modern electronic example is for the same helix in Staphylococcal nuclease as at left, from PDB file 6u0w released 8/28/19. It has several mutations for study of folding and stability, but none in this region. [Jeliaskov et al., Johns Hopkins Biophysics, unpublished]