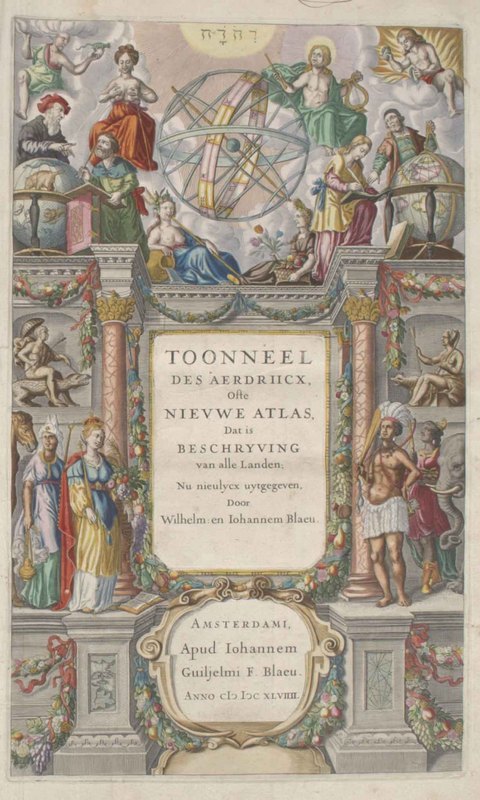 Willem Janszoon Blaeu was born in the village of Alkmaar in the Netherlands in 1571. Unsatisfied as a clerk, Blaeu followed a path of interest and went to study astronomy with Tycho Brahe, a prominent Danish scholar, in the isle of Hven. He was interested in studying the heavens, which led to the production of several terrestrial globes. Edward Stevenson stated that because “expeditions were daily setting sail to all shores of the world” and terrestrial and celestial globes were “regarded as essential to a navigator’s outfit of sailing instruments,” globes and their makers were in high demand. Globes were made in a complicated process, taking flat, two dimensional materials and creating three dimensional objects from them. Globes were created using gores, or maps that were engraved in a pieced pattern to become to later lay flat on the surface of the sphere. The sphere was typically made of wood, with the gores varnished over top and then hand painted, supported with bronze pieces on a wooden stand. Most globes in the sixteenth century tended to be rather small in size, but Blaeu’s later globes were larger and thought to be of extraordinary size.  During his studies with Brahe, Blaeu focused on celestial globes and the workings of the heavens; however he also learned the techniques of making navigational instruments and printing presses. What he is most well known for at present are his beautiful terrestrial atlases and wall maps.

What was it that turned this astronomer into a cartographer in the traditional sense of the word? Simply, pragmatism. He had married in the early seventeenth century and children were on the way soon after. His globes were popular, but they were time consuming to produce and purchased primarily by explorers and rich merchants, a relatively small and specific demographic. To supplement his navigational instruments and globes, he began engraving and printing terrestrial maps that were becoming popular for the same reasons as globes, but on a wider basis for their artistic uses. Blaeu “chose maps in which the public took the greatest interest: a worldmap, the continents, the Republics, a view of Amsterdam, Spain, Italy, France.”  Exploration was popular in Europe, as was art. Aristocrats used wall maps as status symbols like a portrait or sculpture.  Rich businessmen wanted maps of the areas in which they did business to hang on the walls in their offices.

The switch from celestial to terrestrial mapping really put Blaeu’s career on the map (so to speak). His “alertness in mapping the new discoveries” that “kept pace with the increasing importance of the contributions of the Dutch to explorations of Asian and American waters” (Koeman, 13) caught the eye the of the Dutch East India company. He was consulted by a growing number of Governors, which led to his appointment as the company’s hydrographer in 1633, creating maps for the captains to navigate to their destinations. This benefitted both his name and business. For his business, Blaeu stated that he requested ship captains employed by the Dutch East India company to take measurements of the places they visited and give him their notes. This access to the latest information coming from new areas of discovery gave Blaeu a leg up amongst his competitors.

Willem Blaeu built the House of Blaeu into the largest printing house in Europe, which continued after his death in 1638, by his sons, Cornelius and Joan. While Cornelius died soon after his father, Willem laid a foundation for Joan to continue the business. He was especially artistic and had contributed to a fair amount of the editorial editions in many of the pieces his father began while he was alive, both of their names appearing on many titles. His interest was different from his father’s, focusing primarily on atlases and printing as opposed to instruments and globes. Historians’ bibliographic terror, East India Company hydrographer, and forward business thinker, Blaeu produced many of the representations of the new world and the divisions that were being taken to it.

As students of history, or cartography, or library science, or any other subject that require some form of research, we all have a certain love-hate relationship with bibliographies. Whether it is the wee hours of the morning before the research is due, scrambling to perfect citation form or that fantastic moment when one finds the perfect source in the footnotes of that article that was much longer than necessary. As for atlas production in the seventeenth century, the process was “a bibliographer’s nightmare” because of constant upcylcing of pieces, used to make newer and more visually appealing pieces.  Blaeu contributed to such a nightmare while becoming one of the greatest known cartographers and printers of history.

It was a process of constant borrowing and refurbishing. Anytime a an old cartographer passed away, like Mercator and Honidus, leaving no son to continue the business, all of his plates, templates, and materials would be auctioned, often to other cartographers. For atlases especially, “thrift meant that minor changes were added to existing copper plates, old sheets continued to be used after newer versions were printed and new letterpress text was appended to older maps.” (Krogt)  Rarely were these sources cited other than the name of the last editor. Atlases could comprise several different cartographers’ pieces all with updates or additions added by the publisher. Scholars today are able are finding links between maps and atlases over time and are beginning to reference a piece’s original maker if only in passing.

On China and Cities

China was somewhat of an enigma prior to the sixteenth century. Later attempts to establish significant trade lines in the area were more or less failures until the Dutch found their way in during the late seventeenth century. However, missionaries had better luck with establishing contact. The information that they returned with sparked Europe’s intrigue. The organized cities and developed systems of government attracted interest to the area, especially in the late seventeenth century, presenting China as kingdom of peace and stability in the midst of turmoil in Europe.

Jesuit missionaries in particular were known for their spread of scientific practices as they evangelized, especially in China.  Cartography was one of the most popular Renaissance practices that these travelers took along with them. Dr. Hui-Hung Chen stated of Jesuit cartographers “maps serve as a visual proof to emphasize the greatness of the world and the miniscule nature of man” and that through maps one could see the omnipotent view of God and provide an aid to their evangelism. A great number of Chinese county maps made in accordance with Chinese cartographers exist with Jesuit additions focusing on the locations of churches and local missions in different cities. The data (longitudinal) from these smaller maps were often compiled in to tables that were used to produce the larger maps, including Blaeus. Martinus Martinius, was one of these returning missionaries and he reached out to Blaeu upon his return, offering his tables and views of China. He based his map off of several older, even ancient atlases of China, as well as his own measurements, recorded in the 53 largest cities throughout the provinces of China. These cities were some of the frequented areas by the Jesuit missions and shaped the landscape and character of this important piece in Blaeu’s atlas.

Pages from Volume 1 of the Willem Blaeu Atlas (1648-1655) held by the Rubenstein Library, Duke University. 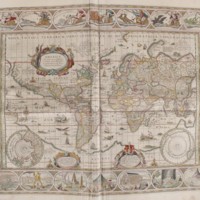 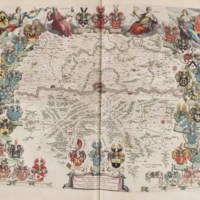 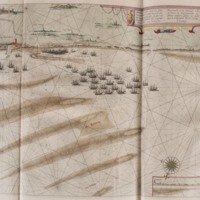 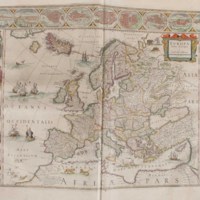 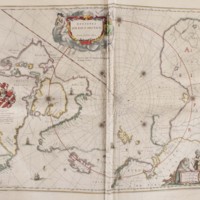 Chen, Hui-Hung. “The Human Body as a Universe: Understanding Heaven by Visualization and Sensibility in Jesuit Cartography in China”. The Catholic Historical Review. Vol. 93, No. 3 (Jul,2007), pp. 517-552.

Koeman, C. and Blaeu, Willem Janszoon. “Life and Works of Willem Janszoon Blaeu. New Contributions to the Study of Blaeu Made in the Last Hundred Years”. Imago Mundi. Vol 26. (1972): 9-16.

Stevenson, Edward Luther. Terrestrial and Celestial Globes Including a Consideration of their Value as Aids in the Study of Geography and Astronomy. Vol 2. New Haven Pub. for the Hispanic Society of America by the Yale University Press. 1921.

Szczesniak, Boleslaw. “The Seventeenth Century Maps of China. An Inquiry into the Compilations of European Cartographers.” Imago Mundi. Vol. 13 (1956), pp. 116-136.

Gores: “The Experiment in Converting Old “Age of Discovery” maps into globes. Turning a flat 2D map into a 3D Globe.” http://www.spin3d.com/.

← About the Borderworks Lab
Durham, NC and Duke →
Willem Blaeu