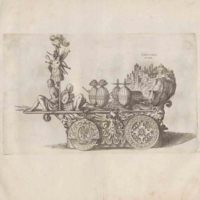 The images shown here are from the following two volumes: 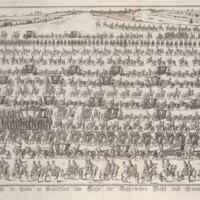 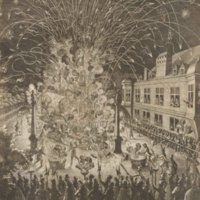 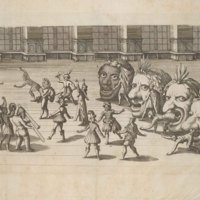 These festival books, commissioned over a century apart, were created to celebrate separate festivals occurring within the German states in Central Europe. Repraesentatio der furstlichen Aufzug und Ritterspil was commissioned in 1616 by Johann Friedrich, Duke of Württemberg and his wife Barbara Sophia Margravine of Brandenburg to celebrate the festival surrounding the birth and christening of their son Friedrich of Württemberg. Vollständiges Diarium von den merckwürdigsten Begebenheiten was created in 1742 to celebrate the coronation of the Holy Roman Emperor Charles VII.  While commissioned for different reasons in separate centuries, both books display the somewhat eccentric festivities surrounding the ruling class of German states during the early modern period.  They provide documentation of these lavish affairs and helped to exhibit the power of the ruling class.  While these books may provide insight into and celebrate court life and tradition, they were also meant to carry additional meaning. These festival books may contain images of cities that do not immediately seem familiar as maps, but as images of the city, they were clearly created with the same sort of multiple motives and messages that can be traced throughout German cartography of the period.

German mapmaking holds a storied tradition that began far before the commissioning of these German festival books.  The first printed world map as well as the first map printed in vernacular were published in the German city of Augsburg in the late 15th century, a testament to the early adoption of the printing press by German cartographers.  Shortly afterwards, Erhard Etzlaub compiled his famous map of Central Europe entitled The Way to Rome as a guide for those travelers flocking to Rome for the 1,500 anniversary of the birth of Christ.  Heads of state realized the potential of these regional maps for expansion of control.  Holy Roman Emperor Charles V hoped that these maps could help him to establish efficient civil administration over the vast territories he controlled.  This mentality led to the creation of detailed maps of German states by mapmakers such as Peter Overadt , a student of the Cologne school of mapmaking founded by Frans Hogdenberg in 1570. Maps such Overadt’s Gloriae Germanicae Typus, complete with portraiture of ruling figures, were instruments of government, commissioned by state officials with the purpose of allowed for more efficient taxation and projection of state powers.

While many maps created during the 16th and 17th centuries were meant to project the power of the state, another trend in cartography was also occurring.  This trend emerged out of two important aspects of the German state.  First, the economic and commercial center of Europe had shifted from the Mediterranean to Northern European states by the close of the 16th century.  Additionally, the Holy Roman Empire was made up of a multitude of smaller states ranging from principalities down to independent imperial cities.  By 1520, ornate maps became a symbol of status for the cities of this cobbled together empire.  Merchants and bankers would commission maps showing a birds-eye view of their cities in order to emphasize the standing of the city and thus to enhance their own business profiles.  The 1572 Braun and Hogenberg map of Bruges stands out as an excellent example of this statement of power.  The map of Frankfurt included in the festival book celebrating the coronation of Charles VII without a doubt falls into this category.  The prominence of the city is shown by directly associating Frankfurt with the celebration surrounding the emperor. During this period of German mapmaking it becomes clear that the party commissioning the map played a major role in deciding the nature of the map itself.  Detailed regional maps allowed for the projection of state powers of taxation while city views became important symbols of status and power within the Holy Roman Empire.

The map of Carthago Nova  included in the festival books could be thought of an eagle eye view of a city, as it does contain an overhead view of the city in question. However, this map depicts Carthago Nova in a rather strange fashion, emerging from the back of an ornate cart.  This map displays not only the city but also its rich history thought the cuirass, bound warriors, and distinctly Roman helmet.  Maps of this fashion are not simply bound to a historical perspective. A map of the United States created in 1833 features a soaring eagle superimposed onto the young country, with eagles spreading westward and claws pointing towards Cuba in the authors imagining of “Manifest Destiny.”  Political messages can be transmitted through these strange maps, such as the 1896 Aleph Maps in which Prussia is displayed in the shape of a soldier at the ready or Denmark as a female ice-skater.   These are maps that move past simply displaying a particular city or state, they hold an agenda to fit geography into a narrative, be it past, present, or future.

With these strange maps in mind, it is worth taking a look at other maps that provide a “nonbiased” or “accurate” depiction of the globe.  For example, Abraham Ortelius’s 1570 Theatrum Orbis Terrerum represents to many the first modern atlas, depicting the four known continents without caricatures of countries or cities riding on carts.  However, on second glance a political statement is present in the title page of the 1573 edition, in which a personification of Europe sits above the other three continents as ruler of the world.  In a similar manner, the fairly accurate and informative map of the British Empire provided in the July 24, 1886 edition of the Graphic newspaper appears surrounded by stereotypes of British colonies, with Britannia seated on a globe.  These maps, which many would label as ‘normal’ or ‘accurate,’ are linked directly to the earlier ‘strange’ maps that pursue a political or social agenda.  The question then becomes, truly how strange are these maps?  In the end, should maps such as the portrait of Carthago Nova be thought of as strange because they depict social and political biases or because they do so in an ungraded and direct manner.

Harwood, Jeremy. To the Ends of the Earth: 100 Maps that Changed the World. Cincinnati, OH: F+W Publications Inc., 2006.

Vann, James. “ Mapping under the Austrian Habsburgs.” In Monarchs Ministers and Maps, edited by David Buisseret, 124-152. Chicago: The University of Chicago Press, 1992.

The Way to Rome:  Etzlauh, Erhard. “The Way to Rome.” [map]. 1500. http://upload.wikimedia.org/wikipedia/commons/1/19/Rompilger-Karte_(Erhard_Etzlaub).jpg