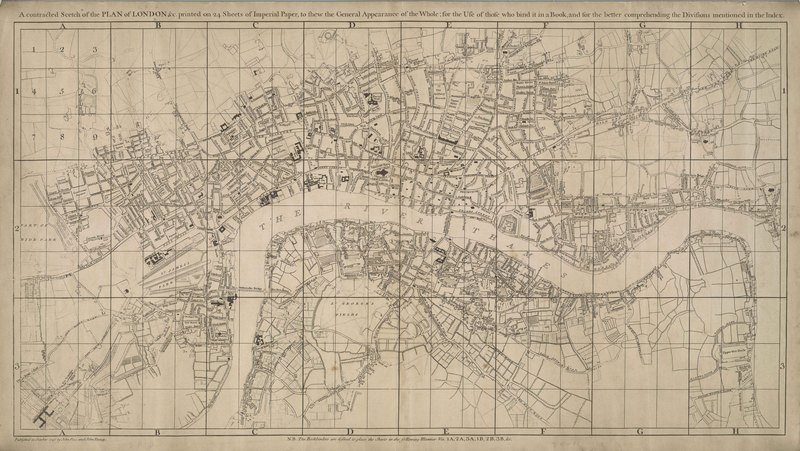 As England and France were becoming two of Europe’s most powerful empires that had colonies all over the world, the rivalry between them escalated to new heights. Furthermore, there was a fervent competition between Paris and London for the title of the largest city in Western Europe. The rivalry turned into the battle of political systems and ideologies as well: a constitutional monarchy, characterized by the notion of the King-in-Parliament, in England against the absolute monarchy in France. This conflict was also articulated in terms of religion: a Protestant Britain versus a Catholic France. French support for the Stuart “pretenders” — James II and his descendents, who were ousted from the throne by James’s daughter Mary and her husband, the Dutch William of Orange, as a result of the Glorious Revolution in 1688 —  only added fuel to the fire.

The eighteenth century amplified this rivalry as the two powers fought for economic and colonial influence around the globe, as well as a balance of power in Europe, between not only England and France, but also the Bourbons, Prussians, Russians, Austrians, among others, including the War of the Spanish Succession, the War of the Austrian Succession, and the Seven Years’ War (known in America as the French and Indian War).  From  North America to Africa and India, these conflicts transformed the British Empire, establishing its powerful navy and colonial influence throughout the world.

During the intense battle in the eighteenth century, when the balance of power could go either way, England and France competed in every aspect of civilization. Rocque’s Plan of London came as a result of this competition. Some scholars like Peter Barber argue that Rocque’s plan of London proved that London was superior, even though Rocque ironically imported French conventions in mapping to make his point.

London was in a midst of change and growth. It had been undergoing a phase of reconstruction after the Great Fire in 1666, which destroyed most of the City. But more so, the political, social, and economic climate in London was fluid and dynamic after the Glorious Revolution in 1688 and the dawn of the Industrial Revolution. By 1746, when Rocque’s plan of London was published, London was Europe’s biggest city and a center for international trade.

The eighteenth century started off with the formation of Great Britain through the Act of Union in 1707, which brought Scotland and England together. As part of the agreement, the Scots were given a proportion of seats in Westminster, and many moved themselves, and their money, into London.  The rise of the East India Company throughout the 18th Century can be seen on Leadenhall Street in London, where the company’s headquarters was. Further west in London, past the famous St. Paul’s Church was the center of the British Press on Fleet Street. Finance was a growing field in London as the Bank of England was only created in 1694. The Royal Exchange was also filled with traders, and was a cosmopolitan center. The Royal Exchange was divided into specific parts designated to regional group of traders and types of merchants to cater traders from all over the known world to validate London’s reputation as the international trading hub.

Despite all the changes and growth in London, it was overridden by crime at the time. Public hangings were common and enjoyed by the people. To combat the prevalent crime problem and enforce the rule of law in London, Henry Fielding founded the Bow Street Runners, which is now regarded as London’s first police force.

The Edict of Fontainebleau

Louis XIV signed the Edict of Fontainebleau, also known as the revocation of the Edict of Nantes, in 1685, which led to the French Religious Terror. Henry IV of France signed the Edict of Nantes in 1598, it was a time of experiment in Europe with religious tolerance. The Huguenots (Calvinist-Protestants) were allowed to practice their religion and live safely in France. However, the Edict of Fontainebleau ordered the destruction of Protestant churches, expulsion of Protestant clergy and closure of Protestant schools. It also required baptism and conversion to Catholicism of all children. As a result, the majority of the Huguenots in France fled to neighboring England, Switzerland, Austria, Habsburg, and other places. Louis XIV reported that out of the former 800,000-900,000 Huguenots in France, only 1,000-1,500 remained.

One of these Huguenot refugees was John Roque, whose family is believed to have fled during this period to Switzerland before settling in London.  Rocque (1704-1762), also known as Jean Rocque, covered the whole field of map-making: a surveyor, cartographer, engraver, printer and publisher. He was born in France, but moved to London at a really young age. In his early career as a cartographer, he lived near Hyde Park, but later on in his life as his map-making business grew, he moved to a house on the Strand. Rocque even lived in Dublin, Ireland for a few years.

Rocque’s first known published work was in 1734. From that point until his death, he produced over 100 maps, plans, road books, and indexes.  His work earned him his title as topographer to the Prince of Wales in 1751, and then Choreographer to the King in 1761, one year before his death.

His legacy and contribution to the history of cartography includes his pioneering work in large-scale county maps. His most famous work is the detailed Plan of London. When producing maps, Rocque relied upon the goodwill and patronage of the noblemen, public men, community leaders, and residences of the place. This community of people was prepared to spend money to own maps, plans, and views of their residences or countryseats.

Rocque had two brothers, Claude and Bartholomew. His nephew, son of Claude, also named Bartholomew, was a highly regarded copper engraver. Rocque has no children despite having been married twice, to Marthe Rocque and later to Ann Bew in 1751.

This piece displayed in the exhibit is just one of twenty-four pieces that make up Rocque’s Plan of London. All together it is 13ft by 6¾ ft. It covers around 11,500 acres of ground. The map is printed on Imperial Paper. The project was started in 1737, and took a total of nine years to complete this detailed plan. Rocque and his team conducted surveys, used bearings of Churches and other public buildings as reference points, and measured distances and angles of streets and corners. When the plan was nearly finished, they asked for feedback from the public, and made appropriate amendments to the map as reported by the people. Certain people were assigned to take each piece and go to the respective part of the city to check the validity and detail of the map. The Plan comes along with an index of the places on the map.

Index and sections of "A plan of the cities of London and Westminster, and borough of Southwark, with the contiguous buildings" by John Rocque, 1746-1749 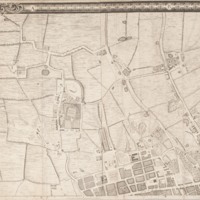 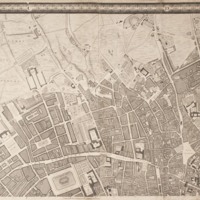 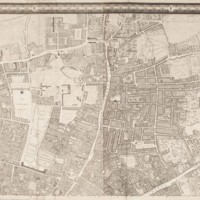 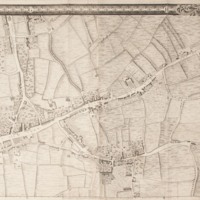 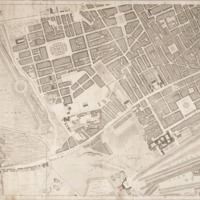 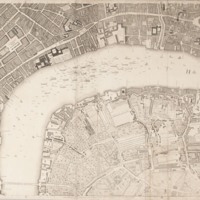 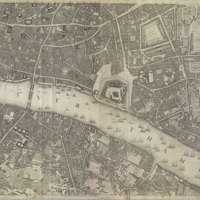 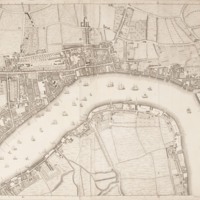 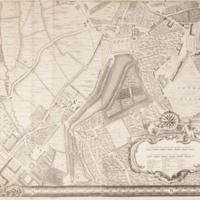 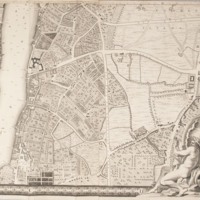 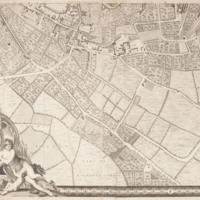 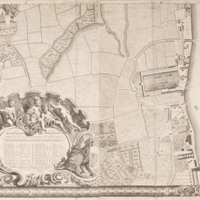 Rocque, John. “A proposal, by John Rocque, surveyor, and John Pine, engraver, for engraving and printing, by subscription, a new, accurate, and comprehensive plan of the cities of London and Westminster, and borough of Southwark …” [London ],  [1740]. Eighteenth Century Collections Online. Gale. Duke University Library - Perkins. 8 Jan. 2013