What does it mean to call a map accurate?

The question of cartographic accuracy brings many things to mind. Accuracy is strongly associated with utility. An accurate map is useful; an inaccurate one is not.  Accordingly, a map’s accuracy is tied to its purpose, and how well it fulfills it. A navigational map might be best served by a comprehensive, meticulous geographical depiction, but maps drafted for other ends might define accuracy differently. Sometimes, an accurate map is not one that includes all the detail possible, but the details that are necessary to convey specific information that the cartographer intended to publicize. A map such as The Fireman’s Guide: A Map of the City of New York relies not on precise topographical data, but on correctly showing the locations of the city’s fire stations, hydrants, and response districts, whereas the New York 1880 - Parks map forgoes all but the barest outline of the city grid in order to better show the location of the city’s parks. Indeed, one of the most recognizable maps of New York -- the NYC Subway Map -- does not correspond neatly to the terrestrial geography above. 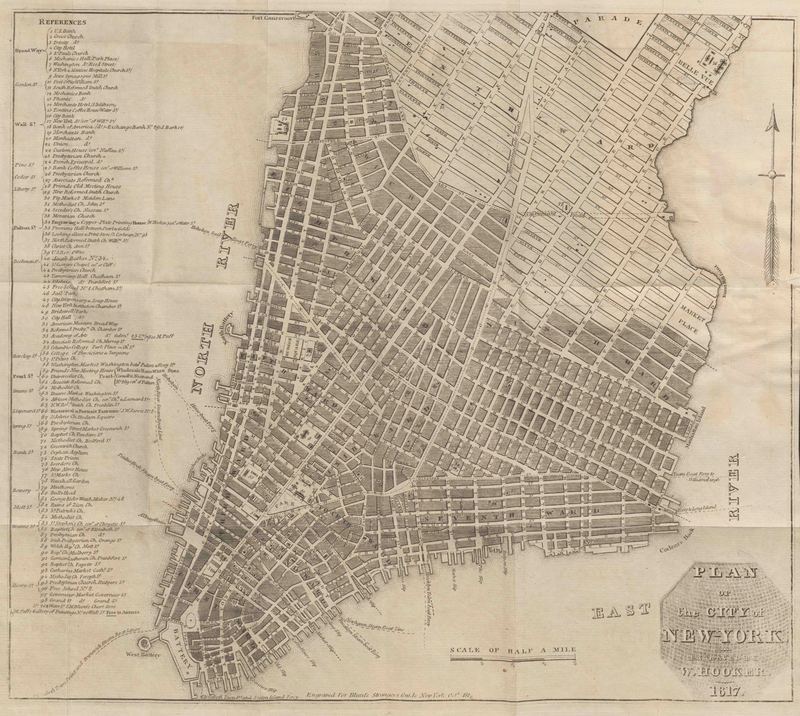 Fold out map from the Stranger's Guide to New York.

New York represents an interesting paradigm of cartographic accuracy in urban maps. It is young enough to have benefited from an established cartographic tradition from the time of its establishment, and prominent enough to have become the most mapped city in the American Colonies by the time of the Revolution. Its utilitarian grid system, described as the triumph of economics over aesthetics, has simplified the process of mapping the city. Yet imaginative and geographically unreliable maps continue to be made of New York, their purpose not to facilitate navigation of the city, but to impart a sense of its cultural identity. And even maps executed with mathematical rigor sometimes detail a New York that at the time existed only in the ambitious minds of city planners. Accuracy in these maps can variably mean the reliable conveyance of geographic relationships between landmarks, the cogent expression of a certain perspective on New York’s character, or the practical presentation of a plan for the city’s future.

Geographic precision is the attribute most generally associated with accuracy. Advances in surveying and mapmaking procedures have greatly increased the ease with which vast amounts of faithful detail can be incorporated into city maps, but it has also altered perceptions of maps from presentations of subjective material to objectively accurate representations of cities that are judged principally on the exact resemblance of the map to reality.  Maps as early as the 17th century displayed a wealth of detail – down to individual trees in the orchards of New Amsterdam – but modern resources have allowed for the most comprehensive representation of New York. The Panorama of the City of New York is a 9,335 sq. foot, three-dimensional model of the city including 895,000 structures that represent every building constructed prior to 1992.

An abundance of detail is not the only aim of geographic precision. The Panorama is an extremely faithful recreation of New York, but hardly useful to a pedestrian on the street because of its size. Maps often sacrifice some details in order to more accurately depict others. Lieutenant John Montresor’s map of New York, drafted in haste during the political turmoil of the 1760s, omitted many street names and topographical features. However, in details pertinent to British military operations in the region it provided a wealth of information, from water depths in the river to hachuring and fortifications around the city’s edges. While one New York resident criticized it as “extremely incorrect and full of gross errors,” Montresor’s map was not intended to perfectly replicate every detail of New York. Rather it represented those features that would provide the most utility to the British army.

Some maps of New York dispense altogether with any pretense of geographic rigor and instead represent the culture and personality of New York. To an extent, all city maps reflect an element of the subjective in their creator’s perceptions of the subject material. Though Catherine Delano Smith notes that maps are almost always the product of more than one mapmaker, recognition of authorship can still provide insight into what idea a particular map was meant to convey. A map that might seem accurate to the cartographer responsible could appear anything but to a viewer trying to put it to a different use. Rick Meyerowitz’s 2001 cover for The New Yorker is recognizable as a map of New York, but could hardly be characterized as an accurate geographical depiction. Yet that particular issue of The New Yorker was the best selling issue ever. Readers weren’t expecting Meyerowitz’s map to be a dependable means of navigation; they were expecting an accurate, if pointed, map of the culture of New York.

The era of the modern visualization of New York, with orderly gridded streets crisscrossing Manhattan, was ushered in long before those neat avenues had become a reality. An 1807 commission was assigned the task of surveying and creating “streets, roads, and public squares…as to them shall seem most conducive to public good…” Their 1811 map bore no resemblance to the city that existed at the time. While its neat city blocks seem familiar to modern eyes, the New York of 1811 barely extended past present-day Houston Street. The Commission proposed a grid of streets traversing almost the entire length of the island, from 14th Street all the way up to 155th Street. Their map was wildly inaccurate as a representation of the current situation of New York, but exhibited the utmost exactitude in the care taken in delineating a realistic pattern of expansion.

In fact, a previous attempt at a regulating plan for the city – the Mangin-Goerck Plan - had been self-identified by its creator as “not the plan of the city such as it is, but such as it is to be.” It was still lambasted for being entirely impractical and inaccurate. Existing streets had been idealized to fit into neat geometric shapes and the waterfront had been materially straightened. Unlike the Commissioner’s Plan, which combined strict adherence to the surveyed dimensions of the island with its plans for future streets and squares, the Mangin-Goerck Plan was dismissed. Accuracy can be more important in certain respects than in others, depending on the intended purpose of the map at hand.

Accuracy and Comparison Between Maps

Successive maps in the 19th and early 20th centuries would illustrate the rapid growth of New York, from an early 1820 example superimposing the original farms of Manhattan over the new grid system to a 1908 map whose wealth of detail manifests the rapid expansion of the city. While the shoreline and street grid change little in between versions, each map places a slightly different emphasis upon New York, whether it be retrospective and agrarian, or clean, simple and focused upon the immutable presence of the city’s gridded streets. Nominally comparing different maps of the same area allows for viewers to judge the cartographic accuracy of each. Given the variety of forms accuracy can take, it is more a process for contrasting different views of the city, each with their own objectives. Accuracy is a measure of precision in mapmaking, but it is also highly dependent upon the purpose of the map and agenda of its maker. 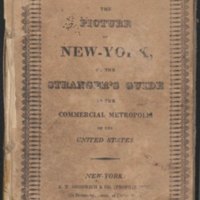 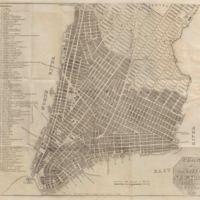 Fold out map from the Stranger's Guide to New York. 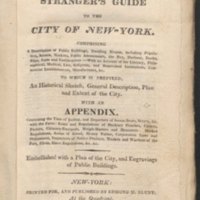 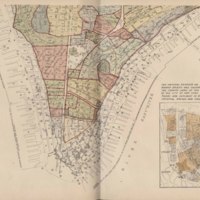 Page from The iconography of Manhattan Island, New York by Robert H. Dodd. 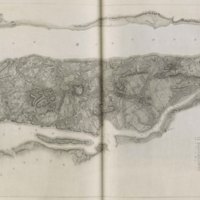 Page from The iconography of Manhattan Island, New York by Robert H. Dodd

“An Act Relative to Improvements, touching the laying out of streets and roads in the City of New York, and for other purposes.” Laws of 1807, chapter 115. The New York State Archives. In Ballon, Hilary. The Greatest Grid: The Master Plan of Manhattan, 1811-2011. New York: Columbia University Press, 2012.

“The Panorama of the City of New York.” Queens Museum of Art. Accessed January 8, 2013.http://www.queensmuseum.org/exhibitions/visitpanorama.

Montresor, John. A Plan of the City of New York and its Environs [map]. 1766. Smithsonian.com.http://media.smithsonianmag.com/images/486*631/GW-Maps-Province-of-New-York-6.jpg.

Moses, Robert. The Panorama of the City of New York [photograph of map]. 1964. Queens Museum of Art.http://www.queensmuseum.org/wp-content/uploads/2009/02/panorama-1-copy.jpg.

Randel, John. A Map of the city of New York by the commissioners appointed by an act of the legislature passed April 3rd 1807 [map]. 1811. TraceSF: Bay Area Urbanism.http://tracesf.com/wp-content/uploads/2012/01/Commissioners-Plan-1_607.jpg.

Steinberg, Saul. “A View of the World from 9th Avenue.” The New Yorker, March 29, 1976.http://mappery.com/maps/A-View-of-World-from-9th-Avenue-Map.jpg