THE AGE OF COMING OUT

The 1970s witnessed a fundamental shift in the way queer people at Duke and across America chose to fight the forces of intolerance and oppression. At Duke, the “Age of Arrest” was lost to institutional memory and queer students were able to be more open about their LGBTQ identities without the direct fear of arrest or expulsion.

LGBTQ students came together to form the first queer student organization in the early 1970s. They also published the “Gay Morning Star,” the first publication on campus written by and for the LGBTQ community.

This was the decade of openly gay San Francisco supervisor Harvey Milk, Pride Parades, and the adoption of the rainbow flag as an LGBTQ symbol. In 1973 The American Psychiatric Association removed “homosexually” from the list of mental illnesses in The Psychological Association’s Diagnostic and Statistical Manual.

The 1970s brought greater visibility and freedom, but Duke President Terry Sanford denied the 1974 request of the Duke Gay Alliance to add sexual orientation to the University non-discrimination policy. It would be fourteen long years before the policy was changed. 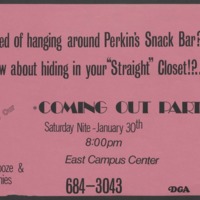 “Coming out Party,” flyers from the Duke Gay Alliance 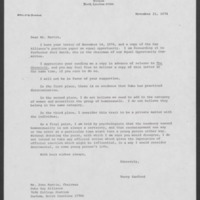 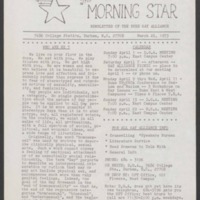