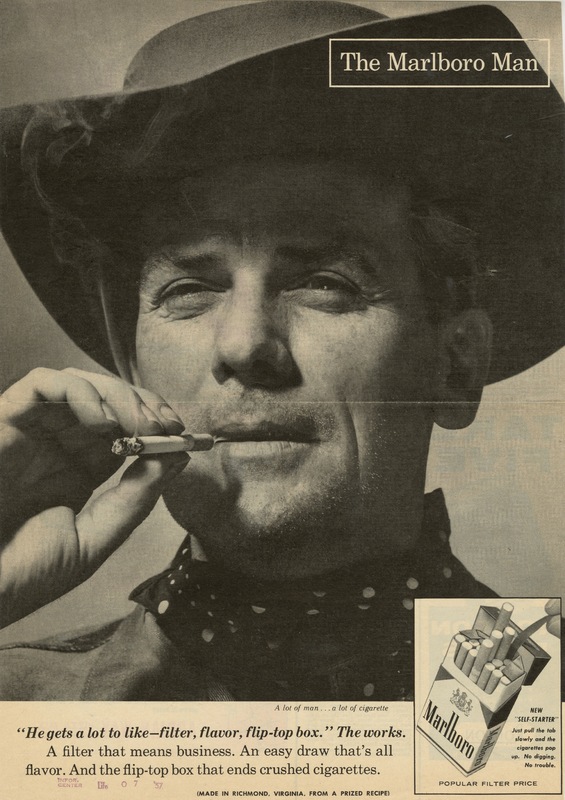 This exhibit explores the history of the cigarette in the United States, from their initial unpopularity, to their emergence as a ubiquitous element of American life, to the rise of vaping today. Tobaccoland examines the role that tobacco marketing, branding, and nicotine addiction have played in twentieth-century American history. The National Cancer Institute estimates that by the 1950s, as many as 67 percent of young adult men smoked cigarettes. But as smoking rates spiked, so did illnesses associated with cigarettes. In the past sixty years, anti-smoking campaigns, lawsuits, regulations, and public smoking bans (like Duke’s pledge to be smoke-free by July 2020) have led to a drastic reduction in the numbers of Americans who smoke. Still, cigarette smoking remains the leading cause of preventable disease and death in the United States.

First introduced in the 1870s, cigarettes were initially unpopular. Americans preferred smoking cigars and chewing plugs of tobacco. In terms of pounds of tobacco consumed, cigarettes did not surpass pipes or cigars until 1923.

A range of factors contributed to the cigarette’s rise in popularity, one being the introduction of “milder” flavors found in bright leaf tobacco. Tobacco companies also began introducing additives, usually proprietary combinations of flavors, to distinguish different brands of cigarettes from each other.

The public’s embrace of cigarettes was fueled by relentless advertising campaigns which sought to lure new smokers in an incredibly competitive market. It worked: the National Cancer Institute estimates that by the 1940s and 1950s, as many as 67 percent of young adult men smoked cigarettes.

As smoking rates climbed, so did rates of cancer and other illnesses associated with cigarettes. Although tobacco companies repeatedly denied any link between cigarettes and cancer, health officials began issuing public warnings in the 1950s. To ease fears, tobacco companies developed “safer” filtered cigarettes, which promised to reduce the tar and nicotine smokers inhaled. Today, cigarettes on the market are filtered, but not safer.

More recently, nicotine addiction research has led to the development of prescription drugs, nicotine gum and patches, and non-combustible electronic cigarettes, which all promise to deliver nicotine without the tar, additive chemicals, and other carcinogens associated with cigarettes. E-cigarettes have their own risks, however. Further research is needed to fully understand the real impact of vaping on one’s body.

This exhibition was curated for the David M. Rubenstein Rare Book and Manuscript Library by Joshua Larkin Rowley, Meghan Lyon, and Amy McDonald. The curators would like to thank the Office of Health Communication and Education in the Food and Drug Administration’s Center for Tobacco Products and the Duke University Live for Life program for donating some of the FDA and Duke-specific artifacts on display.

Brandt, Allan M. The Cigarette Century: The Rise, Fall, and Deadly Persistence of the Product that Defined America. Basic Books, 2007.

Proctor, Robert N. Golden Holocaust: Origins of the Cigarette Catastrophe and the Case for Abolition. University of California Press, 2012.