On January 11, 1964, Dr. Luther L. Terry, M.D., Surgeon General of the United States, released the first report of the Advisory Committee on Smoking and Health. The report codified the government’s position that cigarette smoking was a major contributor to cancer and other serious illnesses. In 1965, Congress passed the Cigarette Labeling and Advertising Act, making it unlawful to manufacture, import or sell packaged cigarettes or promote cigarettes through print advertising that failed to include a warning label. The renewal of the CLA in 1969 sparked congressional debate about its possible expansion. At the same time, the FCC proposed a ban on cigarette advertising on television and radio and a strengthened warning label on cigarette packages and advertising. In the midst of this debate, the New York Times considered discontinuing selling ad space for tobacco advertising, a move countered by The American Tobacco Company with a full page ad in the paper in 1969. 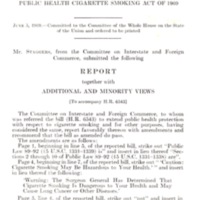 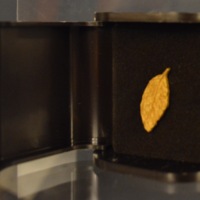 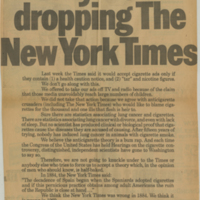