Smokeless cigarettes first premiered as early as the 1980s and were marketed as “safe” because they emitted no secondhand smoke and near-zero tar. Initially unpopular due to bad taste and ineffective nicotine delivery, these products have been developed and refined into today’s electronic cigarettes which allow for inhaling flavored nicotine steam. Companies like JUUL and other producers promote vaping as a step-down cessation assistant to reduce addiction to cigarettes. However, recent reports demonstrate that e-cig marketing strategies mimic cigarette marketing from a century ago, essentially targeting youth and other demographic markets with new flavors, prizes, and misleading messaging. A recent outbreak of acute respiratory illnesses raised new questions about the safety of vaping products and how to effectively regulate them in the United States. 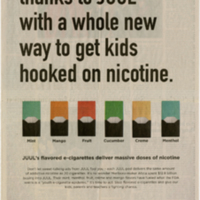 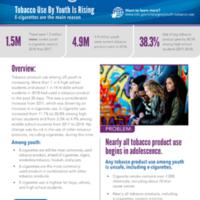